Mark Simpson on the (self) sexualisation of the male body

(Originally appeared in Out Magazine, February 2015)

Male self-objectification is, as they like to say on social media, a “thing.”

There’s been a rash lately of so-called “gender flip” memes, in which people pretend to be impressed by male hipsters pretending to subvert sexism by ironically adopting the clichéd poses of sexualized women.

Although sometimes funny and instructive, especially when it involves licking sledgehammers, the anti-sexism of many of these gender flip memes depends on a (hetero)sexist assumption that men just aren’t meant to be objectified — so it’s hilarious when they are.

Rather than, say, that the men adopting these cheesecake poses usually just aren’t very attractive.

It also relies on jamming your eyes shut in order not to notice how men who aren’t meme-generating hipsters prefer to stake their claim to our attention not on faux feminism but rather on sweat-soaked gym sessions, pricey supplements, plunging necklines, and general shamelessness. And as with sex itself, there’s nothing ironic about it. It’s a very serious, very profitable business.

At the multiplex, Chris Evans keeps blinding us with his all-American oiled bazookas. Channing Tatum and his bun chums keep whipping their pecs and asses out and — who knows? — may even finally deliver the man goods in this year’s sequel, Magic Mike XXL. Meanwhile, Guardians of the Galaxy recently wowed the world by proving that even previously pudgy Chris Pratt (of Parks and Recreation fame) can be a Men’s Health cover girl. And Chris Hemsworth was named “Sexiest Man Alive” by People magazine on account of his long lashes, big guns, and huge hammer.

There’s even an MTV Movie Award for “Best Shirtless Performance,” which in 2014 went to Zac Efron for That Awkward Moment — but only after he stripped again, onstage at the ceremony, without being awkward about it at all.

True, Hollywood too often still feels the need to justify big-screen male sluttiness with CGI heroics, a kind of muscular Christianity in spandex — insisting, in effect, that this is virile activity, not gay/girly passivity. And as if to keep that sluttiness further in check, it often limits the nude or topless male scenes to one per 100-minute movie.

Perhaps because it caters more to women, TV is a relatively unbuttoned medium when it comes to the male body. Even TV superheroes such as Stephen Amell’s Arrow are often costume-optional. Maybe because their male characters are already damned, gothic shows like True Blood, Teen Wolf, and The Vampire Diaries are positively pulsing with appetizing boy flesh. It’s enough to make anyone grow fangs. And the young, buff men of reality TV — the Jersey Shorettes — are everywhere, wearing very little, and doing even less. Except demanding we look at them.

The “structure” of structured reality TV is usually unveiled male V-shapes. In the U.K., a voluptuously endowed, cheeky, straight(ish) guy in The Only Way Is Essex (the U.K. Jersey Shore equivalent) called Dan Osborne became a national hero in 2014 after wearing glittery Speedos on prime time on another reality show,Splash! — even upstaging his mentor, the perfectly formed Olympic diver Tom Daley.

The 23-year-old Osborne, like a lot of today’s self-objectifying straight men, loves The Gays. Really loves them. Last year he appeared in the U.K. gay magazine Attitude, very generously offering readers his shapely bubble butt across a double-page spread, with the strapline “Sex is fun. Be safe and enjoy it.” He told Attitude, “I’ve had a few bum pinches, and I don’t mind that at all. Maybe it’s because a guy knows how hard it is to train, so they appreciate it more.” 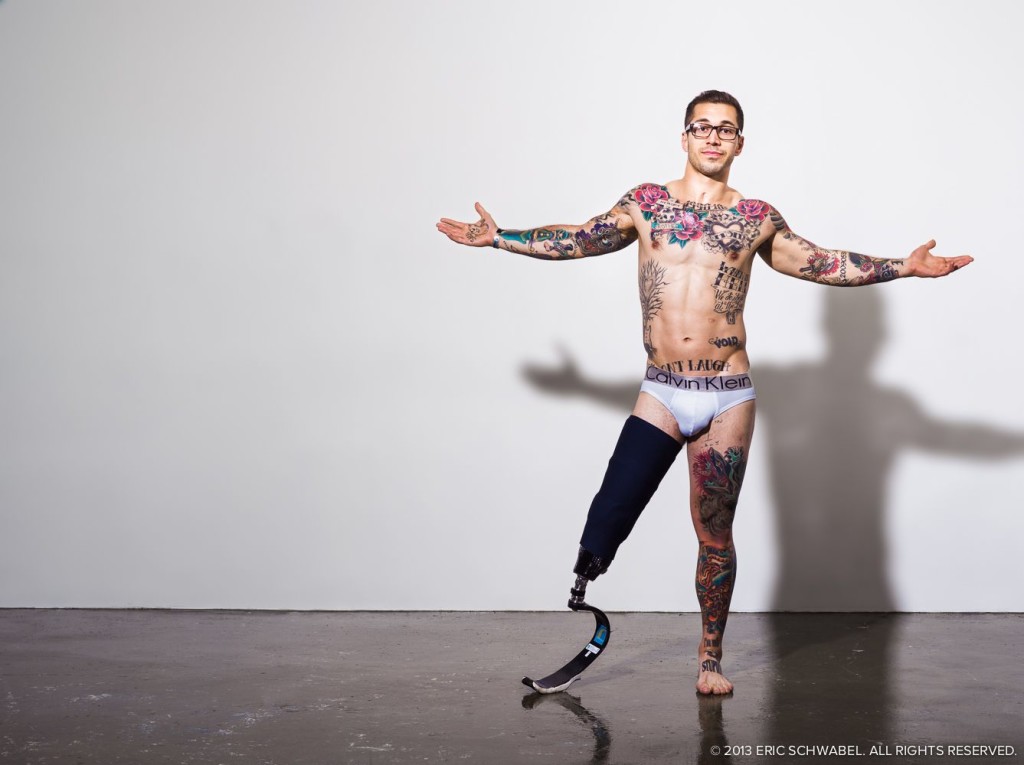 Here in the States, pumped underwear model Alex Minsky — the indelibly inked U.S. Marine Corps vet and amputee — is very happy to mercilessly titillate his many appreciative gay fans with naked naughtiness. And even a major film star like James Franco can’t seem to leave them alone, posting all those semi-naked selfies on his Instagram feed.

The way straight young men chase and hustle gay attention today represents a major, millennial shift in attitudes. Part of the reason that men offering themselves as sex objects were frowned upon in the past was that they could be objectified by anyone — including people with penises. They were queered by the penetrating queer gaze.

Now they beg and plead for it. They instinctively know that male objectification is about enjoying and celebrating male passivity, even — and especially — if you’re straight. So getting the gays proves not only your hotness, and coolness, but also your metaphysical versatility. It proves that you are a proper, fully fledged, all-singing, all-dancing sex object.

Blame the metrosexual, who was born two decades ago, outing male vanity and the masculine need to be noticed. In just a generation, the male desire to be desired, or “objectified,” to use that ugly word — which the metrosexual exemplified — has become mainstream: It’s regarded as a right by today’s selfie-admiring young men, regardless of sexual orientation.

In a visual world, men want to be wanted too — otherwise, they might disappear. They also need to look a lot at other men in order to better understand how to stand out.

Second-generation metrosexuality is very obviously more body-centered and hardcore — or spornosexual. Young men today want to be wanted, not for their wardrobes, but for their bodies. Bodies they spend a great deal of time, effort, and money fashioning into hot commodities down at the gym, tanning salon, and designer tattoo parlor — and then uploading to the online marketplace of social media for “likes,” “shares,” and cutthroat comparisons with their pals.

It shouldn’t be so surprising. Today’s young men are growing up with a different idea of “normal,” in which European and Australian professional rugby players are happy to strip down and oil up. The highly homoerotic, highly provocative Dieux du Stade calendars of rugby players in the buff became only slightly less homoerotic when adapted by Dolce and Gabbana in their megabucks advertising campaigns starring the Italian World Cup soccer team. David Beckham and then Cristiano Ronaldo offered similar favors for Armani, followed by lithe Spanish tennis ace Rafael Nadal, who is currently filling out the Italian designer packet. And former Australian rugby league player Nick Youngquest is now the body and face — in that order — of Paco Rabanne.

Gays are no longer a despised or marginalized niche — they’re leverage. If you get the gays panting, you eventually get everyone else.

David Gandy, possibly the world’s only male supermodel who isn’t a professional athlete, has a darkly handsome, model-perfect face. But his sensual, athletic, beautiful body is his calling card. So it is entirely apt that he was “made” by Mr. & Mr. D&G, who cast him in their famous 2007 “Light Blue” campaign, in a boat off Capri, wearing scandalously abbreviated D&G swim trunks, glistening in the sun and lying back, hands behind his head, awaiting our attention. He was accompanied by a foxy lady (Marija Vujovic), but he was the unquestioned object of the camera’s gaze.

Seven years on, it’s still his trademark. In a clip for Gandy’s recent Autograph underwear campaign, the camera, in extreme close-up, licks down his naked torso towards his naked, shaved groin — then fades out just in time.

It’s clear to anyone who wants to notice that in the spornosexual 21st century, the male body has been radically redesigned. With the help of some “objectifying” blueprints from Tom of Finland, it is no longer simply an instrumental thing for extracting coal, building ships, making babies, fighting wars, and taking the trash out. Instead it has become a much more sensual, playful thing for giving and especially receiving pleasure.

Or as the young men of the Warwick University rowing team put it in a promotional quote for the 2015 version of their now famous nude charity calendar, dedicated to fighting homophobia in sports and rammed with arty ass shots: “Regardless of gender or sexuality, we are inviting you into that moment with us.” 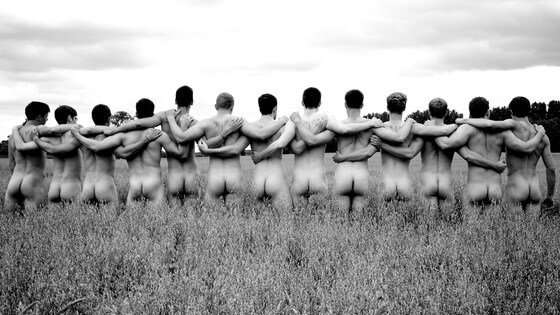 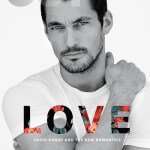