Here Come the Mirror Men: Why the Future is Metrosexual

According to Wordpsy.com and several dictionaries, this essay by Mark Simpson in the UK national newspaper the Independent (15/11/1994) saw the first appearance of the word ‘metrosexual’ in print. (It wasn’t until Simpson returned to the subject in 2002 for Salon.com in ‘Meet the Metrosexual’, naming David Beckham as the prime exemplar, that the term took off globally.)

‘IT’S BEEN KEPT underground for too long,’ observes one sharply dressed ‘metrosexual’ in his early twenties. He has a perfect complexion and precisely gelled hair, and is inspecting a display of costly aftershaves. ‘This exhibition shows that male vanity’s finally coming out of the closet.’

And it’s busy filling the new-found space in there with expensive clothes and accessories. ‘It’s a Man’s World – Britain’s first style exhibition for men’, organised by GQ magazine in London last weekend, proves that male narcissism is here and we’d better get used to it.

With pavilions representing top men’s fashion designers such as Calvin Klein, Ralph Lauren and Giorgio Armani and all the latest ‘grooming’ products, It’s a Man’s World is, as Peter Stuart, GQ publisher, describes it, ‘a terrific shopping experience.’

Metrosexual man, the single young man with a high disposable income, living or working in the city (because that’s where all the best shops are), is perhaps the most promising consumer market of the decade. In the Eighties he was only to be found inside fashion magazines such as GQ, in television advertisements for Levis jeans or in gay bars. In the Nineties, he’s everywhere and he’s going shopping.

Metrosexual man wears Davidoff ‘Cool Water’ aftershave (the one with the naked bodybuilder on the beach), Paul Smith jackets (Ryan Giggs wears them), corduroy shirts (Elvis wore them), chinos (Steve McQueen wore them), motorcycle boots (Marlon Brando wore them), Calvin Klein underwear (Marky Mark wears nothing else). Metrosexual man is a commodity fetishist: a collector of fantasies about the male sold to him by advertising.

Even the title of the exhibition reveals how much times have changed. Not so long ago the expression conveyed the idea that the world belonged to that half which shaved. Nowadays it seems to mean that you have to have the right après-rasage face cream. 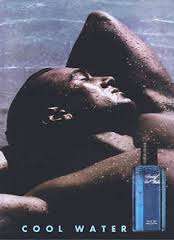 On one of the stands at It’s a Mans World men lie supine while attractive women in white coats rub luxurious moisturisers into their faces; cameras display the beauty treatment in close-up on banks of screens. Behold the metrosexual pampered by women, technology and capitalism! Behold the metrosexual as star.

‘It feels nice. Basically you get a free facial out of it,’ says James, a nineteen-year-old in natty jeans and an Italian designer shirt, face aglow. ‘This stuff is a bit out of my price range, I’m a student,’ he confesses. ‘But if I had the money I might well buy the stuff.’

Is all this attention to appearance a good thing? ‘Yes,’ says another young man, casually-but-carefully dressed in Caterpillar boots, pristine Levi’s, T-shirt, sweatshirt and bomber jacket. ‘If women take so much trouble over their appearance it’s only fair that men should take a bit more themselves. My girlfriend would certainly agree!’

But is it really about fairness? Or about what you see when you look in the mirror? ‘I suppose it’s mostly the way you feel,’ he admits.

A twenty-one-year-old stock manager in Gap agrees. ‘Men are just as vain as women and it’s a good thing that we’re able to show it these days.’

One of the major interests behind metrosexual pride, as the impressive list of sponsors of this event (Dunhill to Porsche, Timberland to Simpson’s of Piccadilly) shows, is big business. Metrosexuals are the creation of capitalism’s voracious appetite for new markets.

Traditionally, heterosexual men were the world’s worst consumers. All they bought was beer, fags and the occasional Durex – the Wife or ‘Mum’ bought everything else. In a consumerist world, heterosexual men had no future. So they were replaced by the metrosexual.

The promotion of metrosexuality was left to the men’s style press, magazines such as The Face, GQ, Esquire, Arena and FHM, the new media which took off in the Eighties and is still growing (GQ gains 10,000 new readers every month). They filled their magazines with images of narcissistic young men sporting fashionable clothes and accessories. And they persuaded other young men to study them with a mixture of envy and desire.

Some people said unkind things. American GQ, for example, was popularly dubbed ‘Gay Quarterly’. Little wonder that all these magazines – with the possible exception of The Face – address their readership as if none of them was homosexual or even bisexual. Little wonder that It’s a Man’s World organiser Peter Stuart found it necessary to tell me that ‘all the men will bring their girlfriends.’

The ‘heterosexual’ address of these magazines is a convention. There to reassure the readership and their advertisers that their ‘unmanly’ passions are in fact manly. Nevertheless, the metrosexual man contradicts the basic premise of traditional heterosexuality – that only women are looked at and only men do the looking. Metrosexual man might prefer women, he might prefer men, but when all’s said and done nothing comes between him and his reflection.

Metrosexuality was of course, test-marketed on gay men – with enormous success. It’s a Man’s World is billed as the first men’s style exhibition – but the Gay Lifestyles Exhibition, which features fashion shows and a whole range of ‘mens products’, is already in its third year. It was in the style-obsessed Eighties that the ‘gay lifestyle’ – the single man living in the metropolis and taking himself as his own love-object – became an aspiration for non-homosexuals. 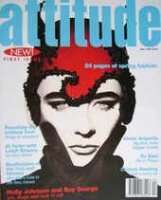 Perhaps this is why Attitude, a style magazine launched earlier this year felt able to break with convention and address itself openly to gay men and ‘strays’ (gay acting straight men).

The New Lad bible Loaded magazine, for all its features on sport, babes and sport, is (closeted) metrosexual. Just as its anti-style is a style (last month it carried a supplement for ‘no nonsense’ clothes, such as jeans and boots), it’s heterosexuality is so self-conscious, so studied, that it’s actually rather camp. New Lads, for all their burping blokeishness, are just as much in love with their own image as any metrosexual, they just haven’t come to terms yet. 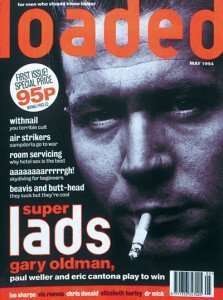 Nor is metrosexuality a vice restricted to the poncey Southern middle-classes. Working class boys are, if anything, even more susceptible to it. For example, Newcastle men between the ages of eighteen and thirty-five apparently spend more money per head on clothes than any other men in Europe. If you live with your mother (as do many working class lads until they marry) and, crucially, you have a job – your disposable income and your metrosexual tendencies are likely to be high.

And metrosexuals have an amazing sense of solidarity. Back at It’s a Man’s World, Steve and Paul, two fashionably dressed men-about-London in their late twenties, admit to spending ‘a substantial amount’ of their income on male cosmetics and clothes, and think that the exhibition is ‘great’. But they’re worried they might be letting the side down.

Says Steve: ‘It’s a shame you picked us to talk to because we’re gay and people might think that a show like this is just for gays and wouldn’t come. The thing is, straight men are just beginning to discover the joys of shopping and we wouldn’t want to scare them off.’

This essay is collected in Simpson’s ‘Metrosexy: A 21st Century Self-Love Story’