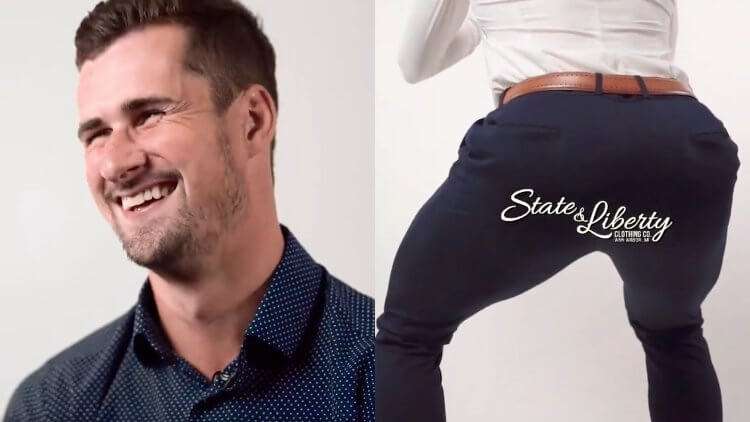 ‘Every time I bend down I feel I’m going to bust through the seams.’

I had no idea that ‘hockey butt’ was such a pressing problem. In fact, I’d never heard of hockey butt before I saw this viral ad.

But it’s my new favourite word for big round muscle bubble butt that sticks out shelf-like, demanding your attention. Certainly it’s a lot more SFW than my other ones.

‘We athletes have a problem with shopping for pants. We have relatively small waists, big quads, big thighs, and big butts!’

And they’re selling not to other hockey players, of course -- but to amateur spornos who don’t want to hide their hockey muscle butts and thighs under a bushell when they have to finally change out of lycra-rich form-hugging gymwear.

Thanks to a host of stretchy suppliers, spornos in the office, on the town, or just visiting their mams on Sunday can scrub up nicely and smartly -- but without sacrificing their henchness or adorability.

It probably says far too much about my internet search history, but I’m getting more and more bombarded with Facebook ads for ‘athletic fit’ dress shirts and trousers, usually attractive young men men filling out their spandex ‘performance fit’ dress pants and shirts very nicely. It certainly seems to be a ‘growth’ industry.

Of course, it’s true that ‘regular fit’ often doesn’t fit athletes and bodybuilders or people who work out. Something that fits your swole chest and shoulders will likely be flappy around the mid-riff. Likewise, jeans and chinos that accomodate your hench thighs are likely to have room for a friend around the waist. In a world where men seem to be increasingly dividing into ‘fitties’ and ‘fatties’ that problem is only likely to increase.

But what is really being sold with ‘athletic’ and ‘muscle’ fit is a smart-slutty aesthetic. A way of ‘wearing’ the hot commodity that you’ve laboured hard to make -- your shredded body. ‘Dress’ clothes that casually advertise your undressed humpiness rather than disguise it, lumpily. Smart spornowear.

A spornos body is after all better designed and made than most clothes -- so why wouldn’t he want the togs he dons to merely follow and fondle the design of his delts and glutes?

After all, that’s what people’s eyes are doing.

Once again, I think we have to thank that chap from Finland whose mid-20th Century sketches for a new, improved, sluttier -- and skin tight -- masculinity have proved to be the blueprint for 21st Century spornosexuality.