NATO brings out the big guns. And huge, pumped bazookas.

Spornosexuals (and man buns) have been mobilised in the propaganda war.

To quote the Duke of Wellington, “I don’t know what effect these men will have on the enemy, but by God, they terrify me.”

Cristiano Ronaldo is definitely no longer the only spornosexual in the football village.

Earlier this week he achieved global fame by giving a whole new meaning to the phrase ‘football strip’ when he got starkers onstage, treating his teammates and fans to an impromptu – yet impressively professional – Magic Mike style sexytime dance. Using the silver Norwegian FA Cup as a somewhat uncomfortable flesh-lite for his ‘climax’.

As you can see, they seemed to love it.

Note how before ‘owning’ the trophy, AndreASSean repeatedly offers the (mostly male?) audience his naked, smooth, well-rounded, trophy-winning butt – apparently riding their roaring approval. Male versatility and an eagerness to please is the hallmark of spornosexuality.

Not everyone however was appreciative of his generosity.

“Winning the cup is a big thing and obviously it should be celebrated, but it is very possible to do so in a manner that shows the cup a bit more respect” said Norwegian FA communications director Yngve Haavik.

By which I suppose he meant that Melgalvis should have bought the trophy dinner before-hand and texted it the next day.

Niceties aside, I find it difficult to disagree with the approving verdict of Melgalvis’ buddies: 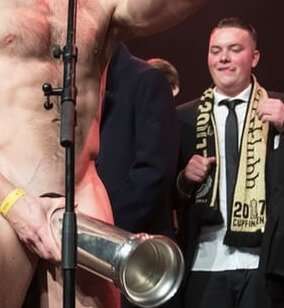