Look around. Everywhere you turn, the male form is being idealized, commodified, fetishized. On TV screens (the ripped vampires of True Blood), in Hollywood (Ryan Gosling’s toned torso lifting Crazy, Stupid, Love to the top of the box office), and on billboards (towering images of chiseled men in briefs), laptops, and smartphones (the appendages of Weiner and Favre). Now look in the mirror. (And we know you do.) We’ve all become body-conscious to the core (not to mention conscious of our core). Working out more, eating better, dressing in slimmer clothes, getting the hedges trimmed (and maybe even a nip or a tuck). Because, in the end, we all want to look as good as David Beckham does in briefs. Have we entered a grand age of self-improvement? Or is it narcissism? Or homoeroticism? It’s all those things, and more 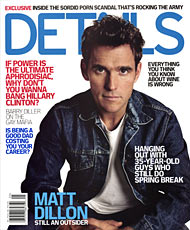 For contractual reasons I can’t reveal more about what happened here: if you feel the need to know you’ll have to buy, beg or borrow a copy of the highly fragranced men’s fashion magazine to find out all the (slightly less fragranced) ‘details’. Let me just say that Dink is a real character and his military models real friendly.

Why, in other words, fighting men might not be pussy about dick.

Homos and soldiers, it seems, can’t stay away from one another. Certainly homos can’t get get enough of soldiers. It was Marcel Proust who observed a hundred years ago that:

If you are a Mark Simpson Patron you can now read an uncircumcised, uncensored and extended version of Simpson’s ‘sordid’ exclusive here

You can become an MS patron for just $1/month