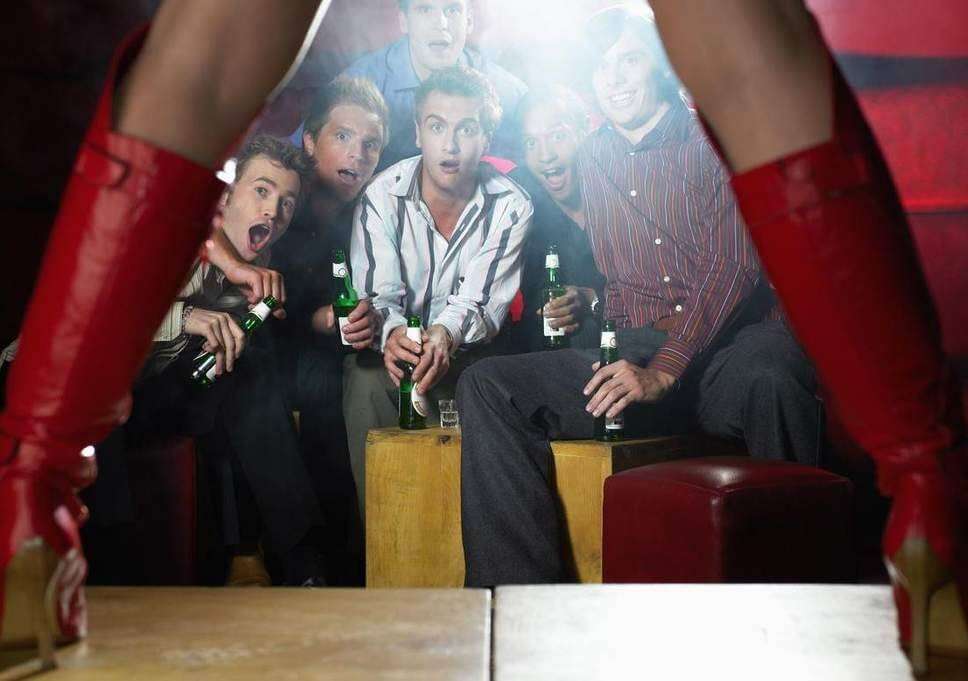 “They aren’t usually stiff, but sometimes they do surprise you,” says Penny, and then turns to her partner, Sarah. “Remember that one at the rugby club which whipped past my nose when I pulled his pants down and slapped you in the face? That was a bit scary, that was.”

“But,” Sarah confides to me, “usually they’re too frightened or pissed to get them up.”

I’m in the dressing room of a pub in Farnborough, Hampshire with Penny and Sarah, two stag show strippers, whose job it is to make boys into men before their wedding day by getting their tackle out in front of their pals, whipping them, spraying their genitals with shaving foam, and conducting impromptu proctological examinations.

But, you’ll be pleased to hear, no actual sex—no”normal” intercourse—is permitted. You have to draw the line somewhere.

“We’re straight girls,” explains Penny, confusingly. She’s just come offstage and is sitting on a stool in front of me completely starkers. An “irrepressible” brunette, she has been in the business for twenty years.

“We’re not blue,” she insists, “unlike some of the girls, who will do anything. We don’t let them touch our privates, we don’t touch their willies, and we never do ‘extras.’ We use kitchen tongs on them and tie them up, but we never touch them.”

Ah, so that’s what “straight” means. It seems a fair enough distraction to me, but some men, excited at the prospect of seeing their best mate in full penetrative action, feel cheated.

Recalls Penny, “I remember one show where afterwards this geezer came up to me shouting, ‘I thought you was going to get my mate! You didn’t do nothing to ‘im.’ He was so angry that we hadn’t done more blue things to his mate that I really thought he was going to hit me.”

Perhaps you should have asked him why he didn’t do it to his mate himself, if he was so keen?

“That was a bad evening,” muses Penny, sensibly ignoring my remark. “There was a huge fight—a four-ambulance number.”

What are the worst nights?

“Oh, football clubs are usually very bad,” says Penny. “They’re so rude and unhelpful and get very rowdy. So are police clubs—they know they can get away with murder. Rugby clubs are the best. They’re usually very polite—they treat you special; somehow I don’t think they get to meet very many women.”

The compere’s voice introduces Sarah over the PA and she rushes out, blonde hair “up” and clad in the leather bondage kit she’s been struggling into during my conversation with Penny. She’s quite a “stunnah”—and this is underlined by the huge cheer that goes up after she leaves the dressing room. A diplomatic few moments later, I follow her.

The pub is full of drunken men with ruddy faces in Armani jeans and loose-fitting shirts. They’re cheering wildly, but good-humouredly, clinging to their pints protectively as Sarah picks on individuals, teasing them, getting them to play with her breasts. Watching them, I’m struck by how many straight men, even when very drunk, have a tension about their bodies, a determination not to let knees touch, wrists sag, hips swivel. It’s as though they want to convince the world that they have fewer joints than other kinds of human beings.

As Sarah struts her stuff, they laugh and show off to one another. She licks a lollipop with an unorthodox part of her anatomy and pops it in the mouth of one of the blokes sitting in the front row, who eagerly sucks it, looking around proudly, before thoughtfully handing it to his mate who also sucks it and passes it on.

Penny did a similar routine earlier, but instead of a lollipop she just used her fingers. Confectionery did, however, make an appear­ance in another part of her act where she made a couple of punters suck some Polo mints for her. She then stuck them over her nipples and made the men kneel either side of her and suck them off.

Sarah “climaxes” her solo act by spraying shaving foam on her crotch and rubbing a stocky farmhand’s grinning face in it. The lads seem to like this especially, cheering even more loudly.

In the interval, the compere does his homo jokes. “Are there any poofs here tonight?” he asks. Silence. “Well, they say one in four blokes are gay,” (where does he get his statistics?) “so if you are out with three mates and none of them are gay, that means you’re the poof!” Uneasy laughter.

After a few more jokes in this vein, the “straight” girls come onstage together and perform a lesbian duo—no simulation. The men are so rapt that they forget to laugh and crack jokes. This is serious. They look like stray dogs at a butcher’s shop window. If it wasn’t for the backing track, the only sound would be the swallow­ing of Adam’s apples.

Afterward, Sarah is changing out of her bondage kit backstage and telling me how popular their lesbian number is.

“I tell you, we could be rich if we marketed this number proper­ly,” she enthuses. “The guys really go wild for it—they can’t get enough.”

Why do you suppose that is?

“Well, because we don’t simulate it. They can see everything.” But why are lesbian numbers so popular with straight men?

“I don’t know. All I know is that I really enjoy doing it—maybe that’s what they pick up on.”

We’re joined by Rick, the husband-to-be, and his best mate John, both in their early twenties. They have brought the girls some drinks as their backstage pass (they probably have a bet with their mates that they can screw the act). John, who is tall and dark-haired, has organised this stag night for his pal and smokes those horrid little Panatela cigars that young “men of the world” smoke in pubs to impress their mates. Fair-haired and pint-sized, Rick is getting married in two weeks. He’s wearing an L-plate round his neck and he’s as drunk as . . . , well, someone on his stag night.

I ask them what is so exciting about lesbian scenes for straight men. John, the “dominant” one in this duo, looks at me blankly. He’s clearly never thought about this; no one was stupid enough to ask him this question before. At last, he says, “Well, it’s obvious, isn’t it?”

No. “Well, it’s because, well . . . ” he trails off. ‘Cos it’s two birds together,” he says exasperatedly. Yes, that’s a working definition of a lesbian act, but what’s the appeal? “I dunno. It’s just exciting.”

Rick appears to have thought about it a bit more. A bit too much, actually.

“It’s like catching your mum in bed with her best friend,” he offers.

Before I can explore the implications of this particularly rich fantasy scenario, Sarah cuts in: “But what about two blokes together? Doesn’t that turn you on?”

“Nah, that’s not a turn-on at all. It’s a total turn-off,” asserts Panatella man.

“Because it is,” he replies, with impeccable masculine logic.

“But I really enjoy doing the lesbian numbers,” says Sarah. “I find that a woman knows best what makes you feel good. It must be the same for blokes. A bloke must know best what you like, since he’s got the same bits and pieces.”

John now looks like someone who ordered egg and chips and got nouvelle cuisine.

“But I’m a woman,” counters Penny, “and I have a boyfriend, but I enjoy sex with women more. I don’t understand why straight men don’t try it out with one another, I bet they’d really be surprised how much they enjoy it.”

“Yeah,” says little Rick, apropos of nothing and everything. “I went home with a girl and her boyfriend a while ago. But, of course, I said to him, ‘If you fucking touch me, I’ll fucking kill you.'”

The boys, who initially thought I was the strippers’ “minder” and were buying me drinks all night, now know that I’m a journalist and want to know who I am writing for. I tell them. They ask what kind of magazine it is; I tell them. A pause. Both of them are a little thrown, but try to look cool. John is better at this than Rick, who can’t stop himself asking, “What, are you gay yourself?” I toy momentarily with refusing the dreadful little “g” word, but then think better of introducing more queer theory to the discussion than the stripper Sarah has already done, and answer in the affirmative. Rick’s eyes widen.

“But why is it, then,” he asks, with a burning curiosity which betrays years of frustration, “that whenever you see gay men on telly they always have handlebar moustaches and leather caps?” Before I can tell him that he’s a little confused (he’s talking about lesbians not gay men), John realises the conversation is getting out of control and inter­venes.

“I hope you don’t think this is a normal stag night, ‘cos this is seriously twisted,” he half jokes. Before I can ask what is “normal” about stag nights, John is busy trying to persuade the girls to give him their numbers so that he can call them direct, instead of going through their agent, to arrange a “private show” for him and Rick. But I understand.

After all, it’s Rick’s stag night and the stripper they want to shag is trying to persuade them to shag each other and a poof is asking them why they like watching lesbians. I suspect that working out my relationship to Sarah is also doing their heads in. Before they hurriedly leave the dressing room, Rick turns to Sarah, gestures towards me, and asks, “So, do you like the fact that he’s a challenge, or what?”

Now it’s Rick’s big moment. Onstage he is stripped bare by Sarah and Penny. They slap his face with their breasts, lower their crotches on to his face repeatedly, giving new and graphic meaning to the expression “pussy-whipped”; shave his pubes, wank his willy with kitchen tongs, and then tie it up with cord and lead him around the room by it (in symbolic imitation of married life).

Everyone laughs and has a good time, especially Rick, who is such a good sport. Then Sarah makes him bend over, bum to the audience, while Penny draws a smiley face on his buttocks. She lights a cigarette and puts it where the sun doesn’t shine. Everyone laughs. Panatella man laughs. Rick laughs. His dad, standing at the back with a “that’s my boy” beam on his face, laughs. Sarah removes the fag and sprays shaving foam in his bumcrack; Penny puts on an industrial rubber glove and, with a theatrical flourish, cruelly jabs a finger up Rick’s poor abused ringpiece. Rick laughs even more than when he had a fag up his arse. (Well, what else can you do?).

Unfortunately for Rick, sitting as I am at the side of the stage, I’m the only person he can see when he looks up, laughing, to check that everyone else is laughing. Our eyes lock.

This soon-to-be-married lad, this initiate into heterosexual, monogamous, holy wedlock who is losing his bum cherry in front of his mates, happens to catch the eye of the one admitted homo in the room. For a ghastly moment, which seems to last an age, our smiles freeze and our laughter turns hollow.

Then Penny sticks another finger up his poop-chute and we’re all laughing heartily again.

Back On The Chain Gang