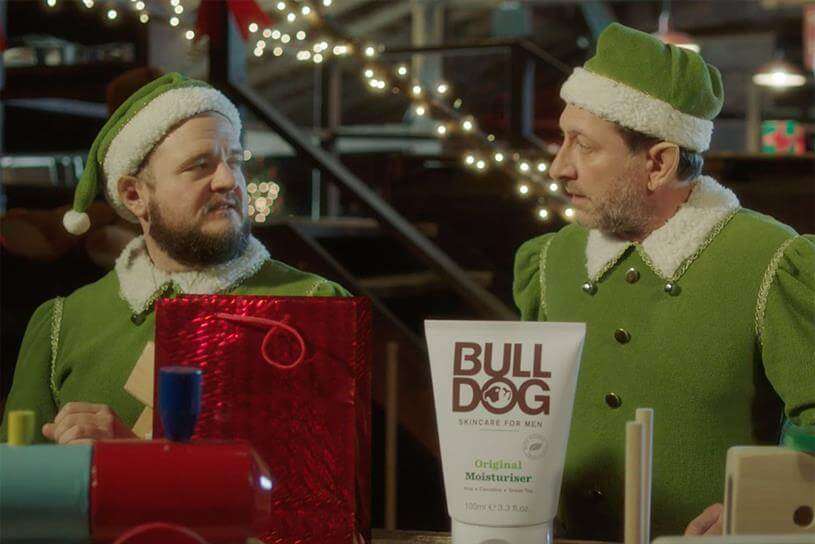 Men’s skincare commercials can be the pits. What’s the point of ‘all natural’ ingredients if the ad brings you out in a rash?

This one from the butchly-named Bulldog currently airing on UK television, is one of the most irritating I’ve seen -- in a very competitive field.

In it two bearded elves beavering away in Santa’s workshop talk about how much they ‘love Christmas’. Then the one on the left announces: ‘We spend all year making gifts for people all over the world but we don’t get anything for each other. I mean who says guys can’t give other guys gifts, right?’.

‘So… I got you something,’ continues the chirpy one, bringing out a tube of Bulldog. ‘It’s moisturiser! For men!’

But they’re elves, not men. American elves. No wonder his chum doesn’t know what to do with the moisturiser for men.

Of course, that’s not the real reason for his strange behaviour. It’s because his buddy has failed to recognise the ‘man rules’ that dictate that men don’t give other men presents. Let alone moisturiser! Even moisturiser for men! Ho, ho, ho!

Bulldog is a UK brand that has had a lot of success in the US, probably in part because of that butch name -- America likes its metrosexuality with manly strap-ons.

Though quite why anyone would spend their hard-earned cash on a moisturiser named after a dog with a wrinkly face I have no idea. No matter how reassuringly ‘fierce’, ‘alpha male’ and ‘big penised’ the brand connotation is.

This ad though is airing on UK television and seems to have been made by a British advertising agency. So I’m not sure why the elves are American, or why the ad is based on ‘man rules’ that I suspect are a bigger deal in the US than the UK.

Exploiting the ‘comedy awkwardness’ of men giving presents to other men is retrograde enough in an ad for male cosmetics, but this ad milks the ‘awkwardness’ to the point where there is almost a sense of homo panic about it.

Though that would actually be funny. Unlike this ad.

Then again, maybe I’ve been played. Maybe there’s a follow-up ad in which the awkward elf gets over himself and gives his chum a big manly hug and some ball antiperspirant gel.