One of the queerest things about homophobia is that many of its targets are not actually homo. Not because homophobia is a blunt, inaccurate baseball bat – though that as well – but because homophobia is used as a way of policing all men’s behaviour, whatever their actual sexual preference. Or just to bring them down a satisfying peg or two. That’s so GAY!! What are you, a FAG?? Etc. Etc.

Now that overt homophobia is increasingly uncool and sometimes illegal, it perhaps tends to be directed even more at men who are not officially gay or bi – albeit in a ‘joshing’ way. Especially if they’re hotter, hencher and much more famous, wealthy and talented than you – and we’re talking about football.

During last week’s match between Real Madrid and Barcelona, the 31-year-old Portuguese football ace and underwear god Cristiano Ronaldo – Real’s star player – was targeted from the stands with chants of ‘MARICON!!’, the Spanish equivalent of ‘faggot’. Apparently this has been going on for a while.

Francisco Ramirez the director of the Spanish LGBT Observatory said: ‘For months the Real Madrid player Cristiano Ronaldo has been the continued object of insults and malicious rumours from the tabloids, and also from sports journalists and… players, in order to humiliate, offend and denigrate a great football player.’

Ronaldo is, by the way, not just a great football player – he’s one of the greatest of all time. He’s also currently the highest paid footballer in the world. Which of course just makes him and his prettiness all the more intolerable. Ronaldophobia is perfectly understandable, really.

‘It is necessary to clarify,’ added Ramirez ‘that homophobia does not necessarily mean that people who suffer are homosexual, but only that other people believe it or use it to insult, harass and humiliate others.’

Quite. I have no burning interest in Ronaldo’s ‘real’ sexual orientation – someone who has reportedly been involved with a series of female supermodels. But lots of people do – straight and gay. Last year a photo of him horsing around with his bearded Moroccan kick-boxing buddy Badh Hari was seized upon by many as ‘proof’ that Ronaldo is GAY!! (it’s never lower-case ‘gay’ – and of course never, ever ‘bi’). Football pundits ‘worried’ on TV that ‘cuddling’ his buddy would ‘affect his performance’.

Perhaps I don’t have enough imagination, or perhaps I’m just not repressed enough, but when I saw the photos I only saw two young men enjoying each other’s company and, rather wonderfully, not being afraid to show it. Not afraid, in other words, that people would think them… GAY!!

I also found myself wondering that if they were actually having a secret gay relationship they might have been rather more inhibited – and Hari might not have captioned the pic of him picking up a grinning Ronaldo ‘Just married!’.

But then, probably nobody really believed that the photos proved Ronaldo was having a gay affair – they were just a way to have a phobic little faux scandal and chastise him again for being a free, affectionate spirit with loads of money and talent and no modesty.

However you interpret it, Ronaldo feels no need to deny the rumours and the abuse or react to them at all. He really doesn’t give a shit what you or I think. Which is what drives so many of us – especially us English with our herd mentality – crazy.

When he played in the UK from 2003-2009 for Manchester United – the same club David Beckham had played for before moving to Real Madrid – Ronaldo was regularly abused from the terraces and also became the target of an especially vicious and sustained phobic campaign from the UK media. Ronaldophobia was a national sport.

Unlike savvy, needy Beckham, proud Ronaldo didn’t go out of his way to curry favour with the press and play the self-deprecating game. Worse, he was younger, better looking, more talented – and, fatally, wasn’t English.

The UK’s biggest-selling tabloid repeatedly attacked the ‘arch metrosexual’ as they dubbed him (as in, I guess, ‘arch villain’ and ‘arched eyebrows’), for sunbathing too much, for wearing ‘tight silver shorts’ on holiday, for his interest in grooming, his ‘perfectly shaved chest’ and generally being a big poof.

They even ran a piece comparing him to George Michael – who is also olive-skinned and GAY!! GEDDIT?? – suggesting he fancies ‘playing for the other team’, and basically just shouting ‘MARICON!!’ at him over and over again.

Ronaldo’s response? He went on holiday wearing even tighter shorts and a pink baseball cap. With a pink flower behind his ear. After the UK press went predictably berserk again – including publishing photos of a male friend ACTUALLY TOUCHING HIM while he was wearing that GAY!! hat and GAY!! flower – he was pressed for a response: ‘I don’t see what is wrong with that if you are comfortable with your sexuality,’ he replied, matter-of-factly.

The English of course aren’t comfortable with anything. Least of all themselves. Which is where much of their Ronaldophobia came from – and will likely surge back again with a passion if he returns to Manchester United as has been rumoured lately.

In that recent match against Barcelona where he was called MARICON! by the terrace oafs, Ronaldo remained as unchastised and shameless as ever – scoring a stunning winning goal in the last few minutes. Then in the locker room afterwards he lost no time stripping down to his white Speedos and showing off his tanned, shredded body in a team photo with the celebrating Real lads.

What a careless, thoughtless, utter bastard. Why can’t he show some respect for the feelings of ugly, untalented men everywhere? 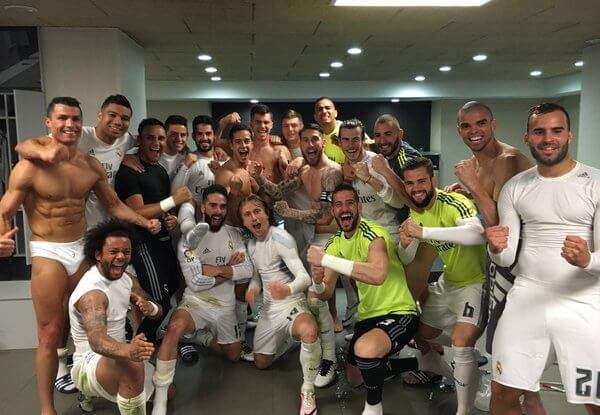 Getting Naked For Signore Spacey