The Dazzling Bi-Brilliance of Tom Hardy

So says pretty much everyone in Legend about Tom Hardy’s looks. And the latest re-telling of the story of Ronald and Reginald Kray, the sharp-suited, impeccably-groomed, glamorous gangster twins who ruled 1960s London’s underworld, is a mostly enjoyable movie which often gladdens the eye (even if it makes you wince a bit during the violent scenes).

How could it not? After all, it stars not one, but two Tom Hardys – he plays, as everyone must know now since it’s the whole conceit of the movie, both twins.

Despite this, it does manage to get a little boring sometimes. Legend makes the mistake of thinking that we’re more interested in ‘Reggie’ than ‘Ronnie’ – because he wasn’t the mad, ‘gay’ one.

So it has a from-beyond-the-grave voice-over ostensibly provided by Reggie’s first wife, Frances Shea (Emily Browning) who committed suicide in 1967, two years after their marriage. The narrative focus of the film is essentially on what it portrays as her doomed attempt to ‘save’ Reggie, domesticate him and make him ‘normal’ – and how this eventually kills her. But no one, apart from Frances, wants him to be normal (and maybe she didn’t either: her family disputes the film’s victimy portrayal of her).

Certainly the audience doesn’t, they just want him to get busy with a ball-hammer.

What everyone – or was it just me? – wanted from Legend was a gayer version of Hardy’s best performance as Britain’s longest-serving solitary-confinement muscular psychopath in Bronson (2008) – which come to think of it was pretty gay anyway. And you do get some of that when ‘Ron’ is on camera: Hardy’s ‘fat poof’ is often frighteningly funny.

But I put the names ‘Reggie’ and ‘Ronnie’ in quotes because at a visual level Legend isn’t about the gangster twins, or London in the 1960s. It’s about Tom and his very ‘hot’, very 21st Century, very narcissistic on-screen sexuality – split into two halves, mad, ugly, gay ‘Reggie’ – and straight, pretty, sympathetic ‘Ronnie’, which fight it out for dominance in this psycho costume drama.

That’s why everyone talks about how ‘lahvelee’ ‘Reggie’ is. Reggie Kray certainly wasn’t bad looking for a gangster, and he scrubbed up very nicely, but he was definitely no Tom Hardy (and Hardy, son of South West London bohemians, is definitely no Cockney). It’s also why we marvel at how ugly Tom manages to make himself as ‘Ronnie’ – so that when ‘Ronnie’ says that ‘Reggie’ got all the looks we actually find ourselves agreeing instead of laughing at the in-gag.

Any film about the Krays would struggle to remain focused on the Krays with Hardy in it. He’s proper Hollywood. But with two Hardys it stands no chance – the twins, their story and the mythology end up spit-roasted by Hardy’s double-ended charisma and great performances (even though his ‘Ron’ did look a bit like a David Walliams character sometimes).

So it shouldn’t perhaps be surprising that the questions get a bit personal. Hardy, 37, who is married (to a woman), famously ‘shut down’ a gay reporter at a press conference for Legend recently when he contrasted his character Ronnie’s openness about his sexuality with what he called Hardy’s ‘ambiguous sexuality’ as suggested in previous interviews.

“What on earth are you on about?” retorted Hardy, clearly annoyed, eventually clarifying the question himself: “Are you asking me about my sexuality?” “Sure” replied the reporter. “Why?” asked Hardy. When no reply came, Hardy dismissed him with a curt “Thank you”.

The interview the reporter had in mind was a candid one Hardy gave a gay magazine in 2008 (to publicise RocknRolla, in which he played a gay gangster) where he acknowledged he had experimented sexually with men when he was younger: “’As a boy? Of course I have. I’m an actor for f***’s sake. I’m an artist. I’ve played with everything and everyone,’” he said. “But I’m not into men sexually. I love the form and the physicality but the gay sex bit does nothing for me.”

After a backlash from some of the gay commentariat to Hardy’s rather more clenched response to the 2015 press conference probings, Hardy stated:

Despite the apparent use of his family and children as sexuality shields in that sentence, the gist of it is true. I also have some sympathy for Tom’s pique at being asked about his ‘sexuality’ (which always means non-heterosexuality) at a crowded press conference, being a married Hollywood heartthrob these days. Moreover, the seven-year-old interview quotes from the earlier part of his career don’t actually demonstrate that his own sexuality is ‘ambiguous’ or that he is now hiding anything – at most he stated that he was bi-curious when younger but is no longer.

That said, Legend is a film which makes his on-screen sexuality into a business. Show business. The drama of the movie is Hardy’s bi/two-sexual cinematic personae. Legend is a bit like Top Gun, but with ‘Tom’ playing both Ice Man (Val Kilmer) and Maverick – where Ice Man wins. And Kelly McGillis kills herself.

‘Reggie’, Hardy’s straight half, aspires, somewhat, to normality; ‘Ronnie’, Hardy’s gay half, revels in deviancy and keeps dragging ‘Reggie’ back to the bent and crooked – and making sure they never part. That’s why Ron is portrayed as openly – and unambiguously –  homosexual (“I’m a ‘omosexual”, “I prefer boys”) not interested in women, when in fact he described himself as bisexual (and married a woman while in prison). Reg is portrayed as straight, when he seems to have also been bisexual, but not so openly as Ron.

Yes, sexuality is a confusing business. No wonder the movie simplifies things – just like the popular press.

Reginald reportedly ‘came out’ in a letter published shortly after his death. Here’s how it was covered in a UK tabloid the Sunday People in 2000, headlined: ‘REGGIE KRAY CONFESSES FROM GRAVE: I AM GAY’:

GANGSTER Reggie Kray has made an amazing confession from beyond the grave – his hardman image concealed that he was GAY.

Reggie poured out his darkest secret in a letter written as he faced blackmail over his homosexuality.

He handed me the astonishing two-page admission in a prison visiting room and asked for it to be published after his death.

So there you have it. Reggie was a self-confessed (dead) GAY homosexual.

Except he wasn’t. The very next sentence in the same report reads:

The once-feared East End crime boss wrote: “I wish for the public to know that I am bisexual.”

‘Gay’ and ‘homosexual’ are often mixed up with ‘bisexual’ in the accounts of the twins’ lives, because culturally we tend to mix up ‘gay’ and ‘bi’ when talking about men. Although attitudes are changing, we often still too often think of male bisexuality as ‘gay’ or ‘homosexual’ or ‘queer’ (because it’s ‘emasculating’ – e.g. ‘once-feared’). Whereas female bisexuality tends to be thought of as heterosexual (because it’s ‘hot’, or because female sexuality is ‘complicated’). And as Hardy himself has discovered, admitting to a bi-curious youth can mean that you are assumed to be at least bisexual or ‘ambiguous’ in the bedroom as an adult.

I don’t claim to know anything about Hardy’s ‘real’ sexuality – I’m totally out of the celebrity sex gossip loop, which frankly, is usually mythology and fantasy anyway, even and especially when provided by other celebs. Likewise, ‘gaydar’ is a very faulty instrument indeed, prone to squealing feedback and hair-raising short-circuits. (And unlike it seems almost everyone else on the planet, I have no information and no opinion on the other Hollywood Tom’s ‘real’ sexuality either.) 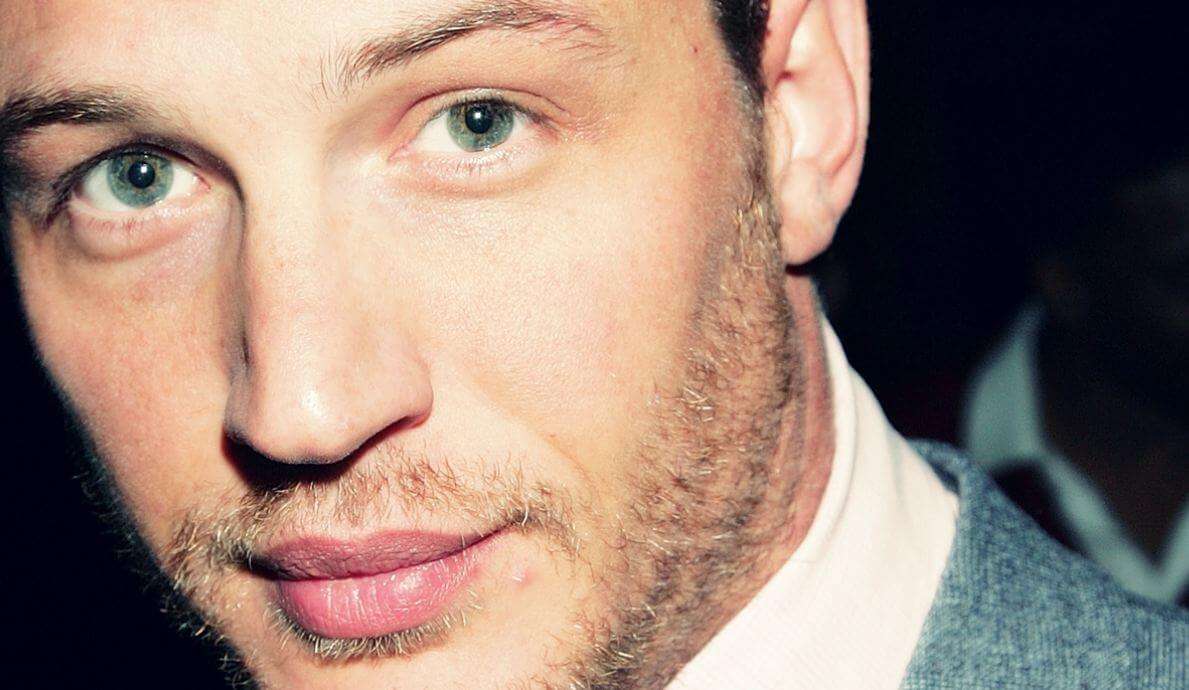 There’s a rather ridiculous Romeo & Juliet scene in Legend where a drunken ‘Reggie’ proposes to Frances through her bedroom window at the top of a drainpipe. But thanks to Tom’s tender talents, instead of scoffing at the cheesiness of it, you find yourself hoping, when the hard man fishes out the engagement ring, that he doesn’t fall and hurt his lahvlee face.

Regardless of his private sexuality, the ‘business’ of Hardy’s on-screen sexuality in many of his other movies is definitely not monosexual, depending as it does on a certain homoerotic-homosocial appeal, and a ‘hard man’/‘soft man’ tension, androgyny even. In addition to his early Band of Brothers/Black Hawk Down fresh-faced, all-boys-together soldierly roles, he’s, as we’ve seen, played a gay gangster before. In Inception he psychically ‘cross-dressed’ and delivered some wonderfully camp lines with panache: “Mustn’t be afraid to dream a little bigger, darling.”

Mustn't be afraid to dream a little bigger, darling

In Warrior (2011) he played a heavily-muscled young MMA fighter forced to wrestle his equally fit brother in a Speedo – but with a happy ending. Even the bottom-feeder comedy This Means War (2012), in which two CIA killers compete for the same girl, was primarily about the passionately Platonic romance between him and Chris Pine, an actor who seems to be 70% hair and 30% teeth. It was only Hardy’s sympathetic skills as an actor and his dazzling bi-brilliance that made you care about their relationship, Pine, or that atrocity of a movie at all.

Hardy has a special proclivity for playing ‘hard men’ who are soft and receptive inside. It’s what makes him such an entrancing sight on the silver screen, for men and women alike. It’s all there in his sweetly engaging face and twinkly eyes, with those big kissable, suckable lips – atop his street-fighter body (young Brando had an angel’s face on a stevedore’s body). Perhaps because of his appreciation for ‘the form and physicality’ of masculinity, Tom is the kind of bloke a lot of straight lads would ‘go gay’ for – and plenty of gay ones would go even gayer for. A man’s man in the modern sense of the phrase. Hardy’s career has been made at the place where desire and identification meet. 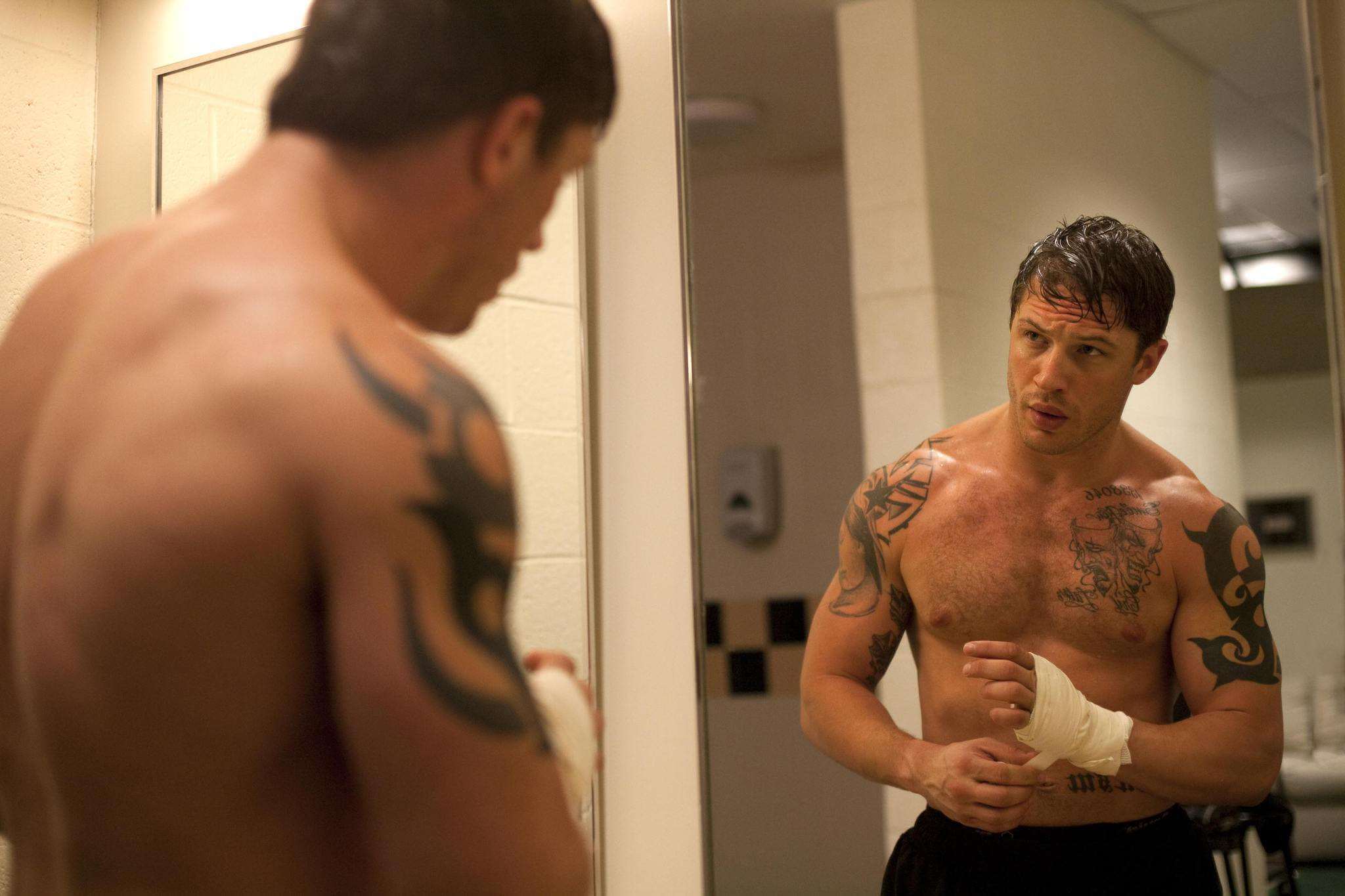 There is a magical kind of misrecognition involved in going to the movies: you see, especially when younger, the movie star as your idealised self. Your twin who is identical with what you should be, rather than what you are. In the darkness of the cinema, the brilliant shadow on the screen becomes your real, long lost twin – you sitting in the dark are the false, found one.

Which brings us back to the sexuality of Legend and the doubly-doomed nature of the deceased wife attempted-redemption story line. Twins are by their very nature ‘homosexual’ that is ‘same-sexual’ – at least to non-twins looking in. They share the same conception, the same womb at the same time, the same birth, as wells as usually the same infancy, potty-training and childhood, and the same puberty. Intimacies far beyond those of lovers. Identical twins also reflect one another, in a narcissistic fashion. In a sense, they are born with the life-companion everyone else has to search for – and they can also watch themselves starring in the movie of their own lives.

So no wonder the Krays’ biographer recently claimed that the twins had sex with one another when adolescents. Or, as the Daily Mail headline put it: ‘THEY FOUGHT AS ONE. THEY KILLED AS ONE. BUT DID THE KRAY TWIN’S UNCANNY BOND LEAD THEM TO BREAK THE ULTIMATE TABOO?’.

Whether or not it’s true, it’s something that should definitely have been included in Legend. Tom-on-Tom action should not have been restricted to those fight scenes….