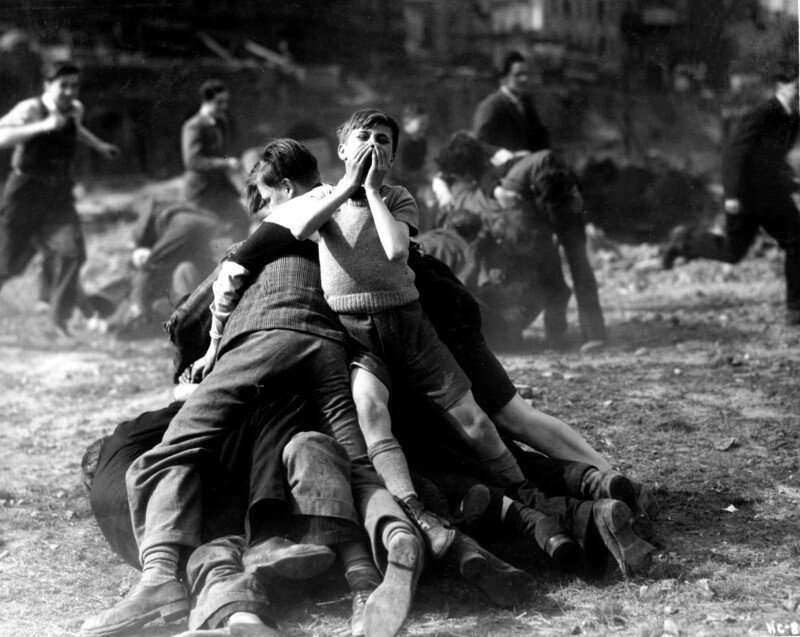 Saw Hue & Cry t’other night on the tellybox for the first time since I was a nipper.

This recently digitally restored kid-oriented Ealing Comedy presents as its climax a London-wide mobilisation of boys (and a few tom-boys) for a ‘big adventure’ – beating up baddies that the police had failed to nab, or even notice. I always loved that kind of film – in which kids show-up the groan-ups, and also give them a good hiding.

Officially the first Ealing comedy, it was directed by Charles Crichton (who went on to direct The Lavender Hill Mob) and shot in 1946, just as the Welfare State was being founded and the horrors of the past were being swept away by the post-war Labour administration of Clement Attlee – who had himself swept away Winston Churchill (the wartime leader who was not nearly so popular as official histories like to tell us).

Maybe it’s because I’m now the middle-aged enemy, but watching it today, Hue & Cry seems really rather disturbing to adult, contemporary health & safety sensibilities. All those kids in rags running around in bombed-out houses, wading through sewers and getting into fights with cops and robbers? Someone call social services!­­­­­­­

The sainted Alistair Sim (and no, I didn’t write that book about him) makes an appearance as the enjoyably eccentric and laughably timid author of the ‘blood and thunder’ comic book stories that the barrow boy protagonist (played with enthusiasm but little skill by Harry Fowler) is obsessed with. Scarf-wearing Sim lives at the top of a German expressionist spiral staircase, his only companions a cat and the Home Service.

But it is bomb-damaged, bankrupted London that is the real star of this movie – shrouded in steam and smoke, with chimneys, spires and dock derricks the only things troubling the still-Victorian skyline. Digitally-restored and viewed on HD widescreen, the past seems almost unrecognisable – even the past in the form of vaguely remembering watching a scratchy print of it on 1970s TV.

Bomb-damaged London is populated, in its bomb-craters and burned-out shells, by its bomb-damaged cheeky-chappy lads and lasses. Intentionally or not, beneath all the jolly cockernee japery, Hue & Cry presents a kind of comic-book PTSD in which the apparently orphaned and traumatised children of the war can’t stop fighting a global conflict that is already over. Note the surprising sadism of some of the fight scenes, in amongst the slapstick (does that baddie really need his head banging on the ground that many times?).

After the clip above ends, the Cockney hero finishes off the mini-tached, side-parted, long-fringed evil-genius (played confusingly by the later Dixon of Dock Green) after  a lengthy showdown in a bunker-esque bombed-out warehouse – by jumping onto his prone stomach from the floor above. With great relish. In an earlier scene the gang tie up a glamorous female villain and set about torturing her to extract the identity of her criminal boss (her terror of mice turns out to be the key to her interrogation). 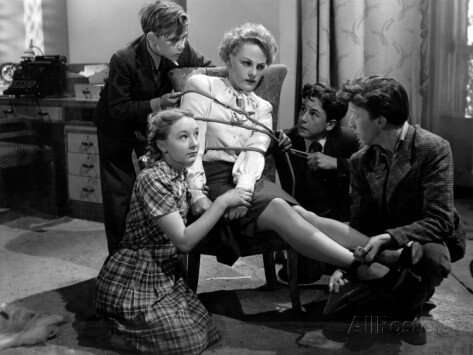 The real version of this world is the one that twins Ronald and Reginald Kray, born in 1933, grew up in: the semi-feral East End gangsters famous for the violence, sadism and terror tactics they employed building and maintaining their underworld empire in the 60s – a parallel demimonde that was both part of and also an affront to the ‘white heat’, glamour and shiny modernity of ‘Swinging London’. The Krays were the sewer rats of social mobility. 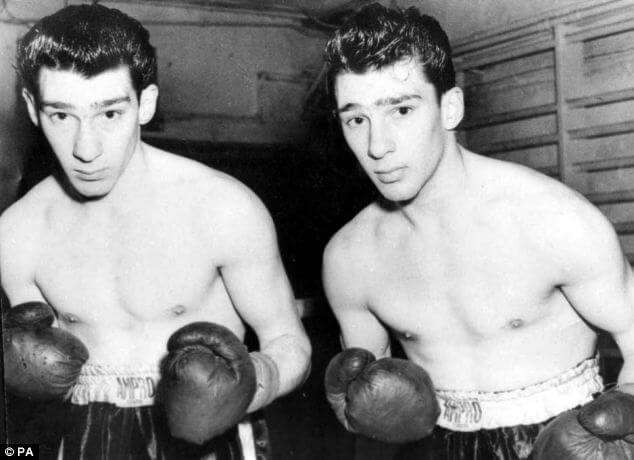 Like the tearaway in Hue & Cry they also couldn’t stop fighting the war that they grew up with – but were only interested in their own war, no one else’s. When they were conscripted into National Service in the early 1950s they decided the British Army was their enemy. By employing all kinds of fiendishly childish and inventively savage tactics (Ronald being proper psychotic probably helped) they won, and the British Army, like the cops and the baddies in Hue & Cry, beat a hasty retreat from the onslaught, giving the twins dishonourable discharges.

They then employed much same tactics on rival London gangs, effectively eliminating the opposition. When this terrifying comic-book duo were finally sentenced in 1969 to thirty years maximum security chokey for murder, the judge dryly observed: ‘society has earned a rest from your activities’. Ronald died in prison in 1995, aged 61; Reggie in 2000, aged 66. But they had already been immortalised on the big screen in the rather good 1990 film The Krays, played by brothers Gary and Martin Kemp, working class London lads who achieved riches and fame by being pop stars in the hit band Spandau Ballet in the 1980s -- rather than by switchblades and gangs.

Another working class pop star, Steven Patrick Morrissey, had a year earlier anatomised the highly homoerotic hero-worship of the Krays and the pernicious glamour of violence in his single ‘The Last of the Famous International Playboys’.

Morrissey - The Last Of The Famous International Playboys

For all their crimes, ‘Ronnie and Reggie’ are almost as fondly-regarded in British culture as an Ealing comedy, and arguably most of the UK gangster movies made in the 1990s and Noughties that followed The Krays were cartoonish homages to the terrible twins. They were certainly comical, even when they didn’t intend to be.

Their story has now been revisited again in a recently-released UK film Legend, starring Tom Hardy playing both roles. I’ve seen it and will offer you my pearls about it shortly. Suffice to say that it’s not so much about Ronald and Reggie, or about class, or about London in the 1960s.

It’s all about Tom -- and the 21st Century’s obsession with male sexuality.

The Dazzling Bi-Brilliance of Tom Hardy