Off Their Trolleys – The Hobbesian Horror of the Supermarket Car Park

There’s a place where drivers lose all reason and all humanity. A place where not only the Highway Code but the European Convention on Human Rights apparently no longer applies. A Hobbesian world at the edges of civilization, where pedestrians are mere squidgy pin balls to be flipped between car bumpers, where anything goes and nothing is off limits.

Except staying longer than two hours.

I’m talking of course about the supermarket car park. We’ve all been there. And we’re all going back. Even though we really, really don’t want to.

According to the AA accidents in car parks are the most common single category of car insurance claims. A cracking 20% of all claims – equivalent to six million – are for damage caused there, and most of these are for supermarket car parks. Though the true figure is probably even higher since many people, mindful of their excess or of losing their No Claims Bonus, don’t bother claiming for minor damage unless it can be proven to have been caused by someone else.

But good luck with that, since according to other research at least a fifth of drivers hitting another car in a car park would just drive off if they thought that no one would notice.

It’s true that many supermarket car parks function as meeting places for young tearaways with souped-up hot hatches throbbing menacingly with bass tubes. However, although noisy, these guys are usually relatively well-behaved – perhaps because an expensively lowered suspension tends to make you more careful. The ones you really want to watch out for are the 4x4s with ‘Baby on board’ stickers in the back window. The main reason people buy 4x4s isn’t ‘safety’ of course – but just so they can speed over speed bumps. And possibly people.

Many drivers instead of slowing down, actually accelerate off the Queen’s Highway into supermarkets. For them, supermarket car parks seem to be a cross between a track day and the dodgems – WHEEE!!! What’s more, they’re FREE!!! The fact that there will of course be other vehicles moving very slowly, or stationary – or reversing out of parking bays – only seems to add to their urgent need to get to the wine aisle ASAP and spend half an hour or so looking for a discounted wine that looks dead posh.

Supermarket car parks are also pavements, since people have to get to and from their cars – and load them up with their shopping before leaving. Which should give one pause. I mean, you might have thought that even the most reckless of drivers would be inclined to take more care here, if only because by definition they are about to become pedestrians negotiating the Death Race 2000 car park themselves. But only if you’d never actually used a supermarket car park.

Things are so bad, so red in tooth and claw in supermarket car parks, that local by-laws really should require all supermarket trolleys to be equipped with defibrillators.

Don’t let it be said though that supermarkets don’t bring the exotic into all our lives. You don’t have to travel to the Continent to see people driving on the other side of the road – just go to Tesco, Asda or Sainsburys. And in the Italo-French style, junctions in supermarket car parks have been dispensed with – or rather, the meaning of a dotted double line across the carriageway changed to: ‘DON’T LOOK, YOU LOSER! JUST ACCELERATE!!’.

All in all, it’s probably just as well that something used in the construction of supermarket car parks completely disables indicators.

Another fun past-time seems to be opening your car door without consideration to the one parked next to you, leaving an indelible memento of your intimate inconsideration on their paintwork. You might try avoiding this by parking in the farthest corner of the parking area, surrounded by legions of empty bays. So far away that you actually have to take a bus to get to the entrance. But this never ever works.

Someone will always take the trouble to ignore the acres of empty spaces and drive out of their way to keep your lonely car company by parking right next to you – and then dinging you. Quite often, as an added gift, you will find yourself wedged in by two 4x4s and have to turn yourself into Elastoman to get into your (doubled dinged) vehicle.

And if, by some Biblical miracle, some ineffable stroke of luck, you manage to avoid all these terrifying hazards presented by other drivers when doing your weekly shop, still you will not I’m afraid escape unscathed. You will return to your car with your unexpected items in the bagging area and find that you have been rammed by a rogue shopping trolley. 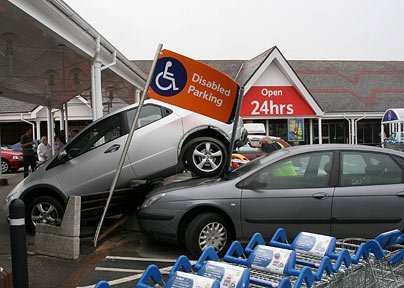 Confessions of a Front Seat Driver

Incompletely Combusted – How Diesel Didn’t Save the World