“You’re As Camp as a Brighton Bus Queue!” – The Bon Mots of Benidorm

I’ve snobbishly held out against the sun-damaged charms of ITV’s package holiday sitcom Benidorm, set in the ‘all inclusive’ Hotel Solana, for several series. But the sixth one – which sadly this week pours the sand out of its shoes and packs its bags for another year – had me surrendering to it more legs akimbo than the Solanas’ Mrs Slocombe-esque manageress Joyce Temple-Savage for Matthew Kelly.

Created and written by Derren Litten (co-writer for The Catherine Tate Show), Benidorm is Carry On meets St Trinians meets Are You Being Served? meets Lady Windermere’s Suntan – and gets an ‘all-inclusive’ hangover and runny tummy. A proper character actor ensemble, rather than a vehicle for some jumped-up stand-up’s overweening ego, and with some lines that glisten like an obese Brit’s back in the Costa Del Sol noon-day sun, it’s very old-fashioned comedy – which is to say, actually funny instead of just sneery-cringey.

No wonder the critics hate it. (See also that other recent ITV comedy triumph Vicious.) Benidorm is tacky and trashy and stuck in the past but doesn’t mind who knows it, thank you very much. 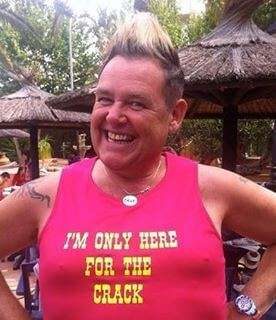 Everyone is a caricature but instantly recognisable. Well, everyone is a caricature except for Kenneth Du Beke (Tony Maudsley) the overweight chain-smoking gay manager of the Solana’s salubrious hairdressing salon Blow ‘n’ Go who, with his rather ‘young’ and ‘cheery’ styling, was mistaken by Philip Olivier (aka ‘Tinhead’ from Brookside) for a children’s entertainer. He’s just documentary.

Tacky and trashy and trapped in the past it may be, but Benidorm is also often well-written and sharply observed. The whole of episode three (below) is quite brilliant and takes on a very contemporary subject – judgey gay assumptions about the relationship between masculinity and sexuality – that most ‘serious’ dramas wouldn’t dare.

The scene at 21:38 between loveable Liam Conroy (Adam Gillen), the swishy Tenko and Dynasty fan and hairdresser who has fallen in love with a girl, and his narrow-minded tight-clothed gay boss who knows better and insists Liam is ‘really gay’ and is going to end up ‘living a lie’ deserves an Oscar:

Liam: “You need to learn to accept people for who they are! Just because I don’t fit into YOUR stereotype of how a man should be doesn’t give you permission to call me names! I am what I am and what I am [swings arm and pirouettes, badly] needs no excuses!!”

Likewise Benidorm is what it is and needs no excuses either. And as Liam’s cross-dressing dad Les/Lesley from Wearside would say: “Thank fook for that!”