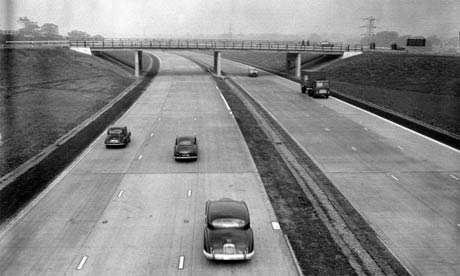 Mark Simpson on the motorway drivers we all love to hate

Statistically the safest roads to drive on, there’s nevertheless something about motorways that seems to bring out the very worst in drivers. Other drivers, that is. Never you or me, of course.

Some would argue it’s because there’s no motorway driving required in the UK driving test. But I think it’s because M-ways aren’t really anywhere. They’re a limbo-land of anonymous boredom where people’s darkest personality defects come out to play – magnified frighteningly by the horsepower they’re barely in charge of. A motorway is a three lane, high speed Rorschach test.

Here’s a list of some of those that fail it. Badly.

Everyone’s favourite M-way psycho, the tailgater is the driver who insists you admire their shiny BMW badge in your mirrors. Before you both meet a sudden, mangled, sticky end.

Responsible for the very worst motorway accidents by ingeniously turning the two second rule for the minimum safe distance into a two inch maximum one, on-the-spot fines of £100 and three penalty points were recently introduced to deter the tailgater (and also the lane-hogger). Though no one really expects them to work. Tailgaters live – and die – to tailgate. You just can’t put a price on sadism.

Diagnosis: Fuel-injected sociopath. With a penis smaller than the gap between your bumpers.

Overtakes you and then cuts you up, forcing you to slow down so as to maintain a safe distance. Hilariously, the bonnetgater will often actually decelerate after they’ve plonked themselves two inches in front of you. They’ve achieved their objective – making you taste their exhaust – so why waste fuel while picking their nose?

The worst thing about the bonnetgater isn’t their thoughtlessness towards other road users, who no longer exist once they’re no longer in the way. No, it’s because they turn you into an unconsensual tailgater. You’re on their bumper and you haven’t even been introduced.

Diagnosis: No sense of personal space. Or sense.

Decides that the minimum safe distance you’ve left between you and the car in front as you overtake traffic on the left is in fact reserved for them and overtakes you at 100 MPH – on the inside lane – to occupy it, while on the phone and eating a burger and smoking.

To get you in the mood, this charming manoeuvre is usually preceded by a spot of especially aggressive tailgating and light flashing.

Diagnosis: Probably a former chairman of an ethical Bank.

Hasn’t worked out that if you drive properly on a motorway, leaving a safe distance, and actually looking through the rather useful device called ‘a windscreen’, the accelerator is of much more use – and much less bloody annoying for everyone else – than the brake pedal.

The Outside Lane Kamikazi

Literally cannot leave a motorway from any lane other than the outside one – braking as they swoop across three lanes because they’ve left it far, far too late. Not because they forgot their exit but because they have to overtake as many cars as they can before they leave the motorway OTHERWISE THEIR LIFE IS A TOTAL FAILURE.

This is in fact the Outside Lane Kamikaze when they join the motorway. Instead of ‘giving priority to traffic already on the motorway’ and matching their speed ‘to fit safely into the traffic flow in the left hand lane’ as dictated by the Highway Code, they treat the slip road as an overtaking lane – or a pit-stop exit ramp.

Once again, they have to overtake as many cars as possible before swerving in front of you just before they run out of slip – and then finishing the manoeuvre with a masterful swerve across two lanes into the outside lane, sans indicator, natch.

Accelerates while you’re overtaking. Can be a deliberate tactic of boy racers showing off their torque, but more usually a sneaky application of the throttle by someone waking up to the horrifying fact there are other people on their motorway.

An annoying dilemma. If you refuse to rise to the bait and don’t accelerate, pulling in behind them instead, they’re bound to slow down and you’ll find yourself in the same situation again. But if you give in to temptation and accelerate you may then have to keep up the same excessive speed as you find yourself both locked in a battle of pretending that you’re not racing.

The Lorry Driver from Duel

Pulls out their eighteen wheel rig faster than it takes their indicator to flash once – while you’re just beginning to overtake. Will also sometimes tailgate you to pass the time, especially when you’re alone together in an average speed check contraflow at night, in the rain, dazzling you with headlights the size of your rear window. (Lorry drivers seem to know something the rest of us don’t about average speed cameras).

Passes the time by complaining endlessly about other motorway drivers and compiling whingeing lists of their failings – while hypocritically practising some of the very same outrages himself from time to time.

(A version of this article originally appeared on LeasePlan)