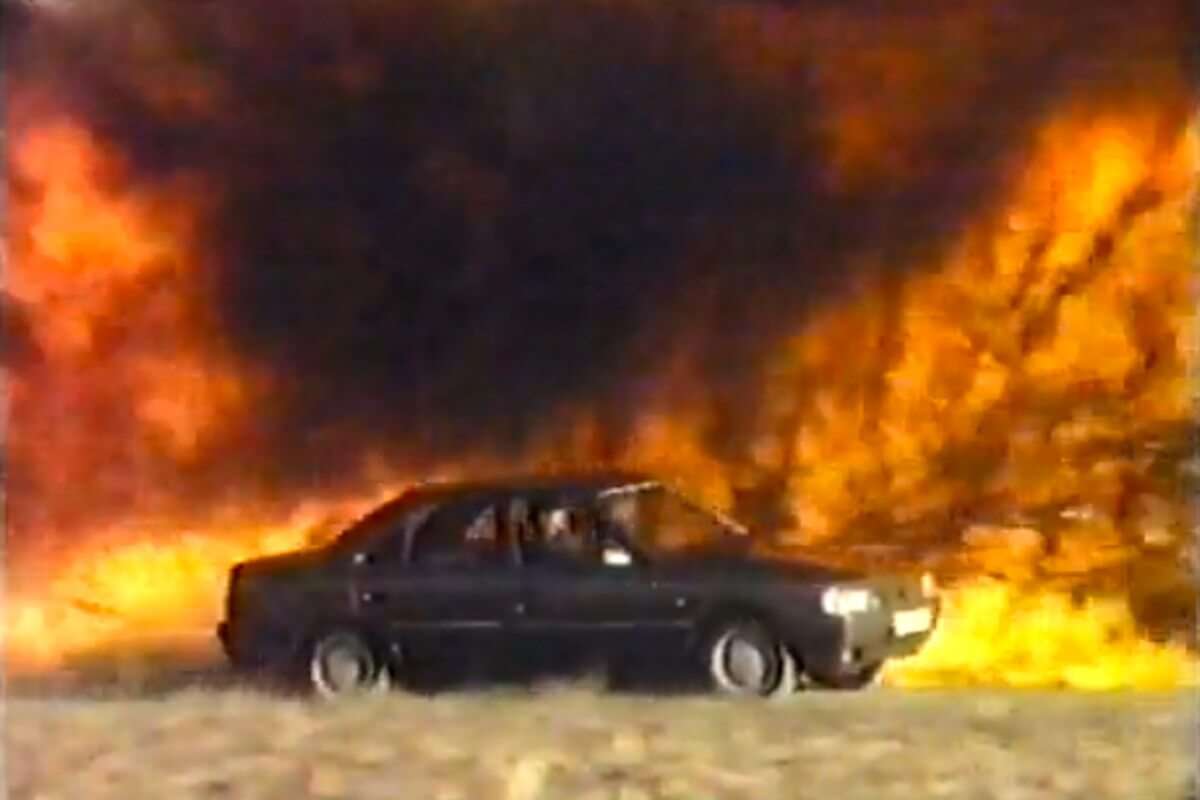 A factory full of robots assembles cars to the strain of Rossini’s Figaro – with nary a soul to be seen.

Today this legendary ad directed by Hugh Hudson seems like slightly dull documentary, but in 1979 it was thrilling Sci-Fi. The graceful movement of the cars and robots set to classical music seems inspired by the weightless scene in Kubrick’s 2001 A Space Odyssey (1968). It was also prophetic – proffering a vision of a world without a working class; a world where fickle people are replaced by much more reliable, much cleverer, much shinier, much more obedient things.

Famously satirised by Not The Nine O’Clock News in a sketch that contrasted the British reality of over-manned car manufacturing in the 1970s: ‘Built By Roberts’.

After dropping Jasper and his violin off at a leafy prep school a couple discuss their plans to take over the world on the drive back to their country pile, while fiddling with plastic buttons on the Renault’s dashboard.

An ad that everyone loved to hate (that woman’s voice; that man’s arrogance) but it summed up the go-getting Thatcherite entrepreneurialism of the early 80s – ‘I’m starting my own business’. It also plays, briefly, with the idea of divorce, which by the 1980s was becoming a major theme in people’s lives.

Despite (Margaret) Thatcherism, it’s a risibly sexist ad. ‘Joanne’ appear to be sexually aroused by ‘David”s chunky car phone, and note how rather than discuss life-decisions that ‘concern the house, the kids’ – and his car – hubby presents wifey with a fait accompli, which she just gushes over: ‘David, that’s fantastic.’ Essentially she’s the posh version of the woman in this 1974 Ford Cortina ad.

A Princess Di lookalike (Paula Hamilton) storms out of a mews house, shoves her wedding ring through the letterbox, hurls her pearls and fur coat – but stops before dropping her car keys down the drain. She keeps the car – which turns out to be a Golf. ‘If only everything in life was as reliable as a Volkswagen’

Directed by David Bailey this is perhaps the definitive 1980s ad, capturing the unabashed materialism and shoulder-padded glamour of the age – but also the ‘changes’ that Alan Price is singing about (the song was written for a friend of his going through a divorce). Allied to that, car advertising is now recognising women’s increasing independence – one of the main reasons for the rising divorce rates – and appealing to them as drivers rather than passengers.

Like many iconic ads it also proved prophetic: it wasn’t until some years later that news of Princess Di’s troubled marriage reached the public.

A car drives through a field of burning and – unaccountably – exploding sugar cane, while a Rolexed hand coolly changes gears, all to the power ballad strains of Berlin’s ‘Take My Breath Away’.

Today this ‘high concept’ ad looks like a guilt-tripping public information film about the evils of global warming, but in the 80s it symbolised perfectly the afterburner ambition of that fabulously psychotic ‘Top Gun’ decade – particularly that of the British advertising industry itself, which was a kind of Soho Hollywood, manufacturing glossy, glamorous 45 second dreams that set Brits aflame with consumer lust.

A haute bourgeois father and his young, svelte daughter sneak and nip around the South of France in their respective Clios, both conducting ‘secret’, very French, very stylish affairs.

Probably the most popular UK car advertisement ever made, running in various instalments for most of the 90s, saw ‘Nicole’ recognised by more Britons than the then Prime Minister John Major. It caught the growing yen of the British middle classes for a piece of the Dordogne (or Tuscan) dream. The 1990s were the decade when we learned to ‘stop being so English’ (as the IKEA ad had it) – and become much more continental in our aspirations and mores.

The traditional chauvinism of car ads is now receding into the distance: Nicole is a single young woman shown driving rather fast down narrow winding streets – to sow her wild oats.

A vulgar squash-playing, loudmouth yuppie stereotype test-drives a cleverly photographed car the viewer assumes is a BMW – before he gets out, revealing it’s actually an Audi, and announces: ‘It’s not my style, know what I mean?’.

This ad exploits the early 90s backlash against/guilt over the vulgar excesses of 80s materialism, but cleverly, and somewhat hypocritically, manages to associate the Audi brand with the excitement of BMW – while making it clear that Audi drivers are a much better class of customer than the people who drive BMWs. Even the disdainful Audi dealer looks like he’s dealing art rather than cars.

A long montage of heroic, occasionally arty thoughts, apparently those of a square-jawed exec driving the Peugeot, all to the uplifting strains of M-People’s ‘Search For the Hero’.

By the mid 1990s the backlash against the previous decade’s selfishness had produced a yen for vaguely ethical, uplifting and ‘progressive’ car advertising – before environmental issues had become the defining middle-class concern. This search for a vaguely ethical hero was answered just a couple of years later with the election of the square-jawed exec Tony Blair. And we know how that turned out.

Perhaps the most famous and memorable UK car ad of the 21st Century, ‘The Cog’ got around the problem of increasing fragmentation of media and audiences by becoming an ‘how did they do that?’ event – and also by employing ‘virality’. In the UK the 120 second version was first aired during a commercial break in ITV’s coverage of 2003 Brazilian Grand Prix and garnered acres of editorial. In most other markets the cost of such a lengthy TV segment proved prohibitively expensive and instead the ad was viewed online – quickly going viral.

‘The Cog’, which appears to have ‘borrowed’ heavily from the 1987 art film The Way Things Go, captured the growing interest in modern art installations in the UK: the Tate Modern, Bankside had opened just three years before, proving a ‘runaway’ success.

An army of workers in white hats and overalls assemble a Hansel and Gretel car entirely out of marzipan, sponge and jelly, lubricated with Golden Syrup.

The ad suggests a kind of ‘artisan’ car, lovingly assembled by swarms of happy, highly-skilled workers – the opposite promise of ‘hand made by robots’, two decades earlier.

“Can you feel it? Can you feel the thrill of being alive?” asks a pixel man driving around a driver-assist, virtual world. “Neither can I. There is no ‘real’ in this town.” He then discovers a Toyota GT86, escapes unreality at high speed, pursued by helicopters, crashing through the CGI barrier into ‘the real’.

The digital, sterile, possibly sexless future prophesised by ‘Hand built by Robots’ has come true. Much too true for some. This ad for a sports car exploits that Top Gear-ish frustration, but like many iconic ads it wants it both ways. On the one hand the irresistible red-blooded reality of this car will save you from the anaemic Uncanny Valley of modern, online life – on the other, it’s suggesting that it might be almost as exciting and fast as the cars that you drive on your Xbox.

Appropriately enough, the ad was banned by the ASA.

Special thanks to Simon Mason.

This article originally appeared on LeasePlan

Mark S
advertising, cars
'Changes', 'Not My Style', 'Search for the Hero', 'Take My Breath Away', 'The Cake', 'The Real Deal', Audi A4, car advertising, Fiat Strada, Hand Built By Robots, Honda Accord, One of Your Better Decisions, Papa? Nicole?, Peugeot 405, Renault 25, Renault Clio, Skoda Fabia, The Cog, Toyota GT86