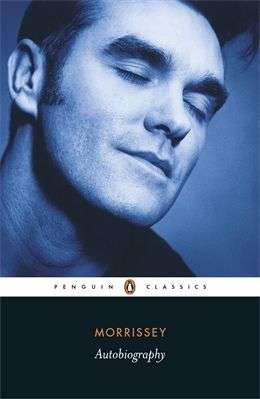 Will Morrissey Have The Last Laugh – Again?

‘Has any book in recent memory not actually about wizards provoked so much interest?’

Mark Simpson on the most eagerly-anticipated music biography ever.

MORRISSEY HAS ALWAYS enjoyed the last laugh. His entire career has been based on it. Back in the 1980s, when he was in his pomp as the pompadoured front man of The Smiths – and loudly rejecting everything the 1980s stood for – Morrissey was asked if he thought that success was a form of revenge. “Absolutely and entirely a form of revenge,” he agreed. But revenge for what? “Well, for everything, on everybody,” he replied. “So now I can just sit back every night – when Minder is finished – and just chuckle, deafeningly.”

Right now he must be chuckling so deafeningly the neighbours are complaining to the council. Wherever it is he lives these days.

His much anticipated, much delayed, much-discussed eponymously titled autobiography is sweet revenge indeed. Has any book in recent memory not actually about wizards provoked so much interest? Before even its existence was certain? Before anyone seems to have read the thing?

Whatever its contents – and your guess is as good as mine – Autobiography is already stamped with Big Mouth’s trademark scorn. The photo on the book jacket (pictured), offering the world his not insubstantial chin. The apparent absence of review copies, ensuring his critics will have to pay to have their ha’pence worth – and everyone and my mother has an opinion on Morrissey.

But the best and biggest joke of all is that it doesn’t matter what they scribble. Or in a way, what he’s written: Morrissey has succeeded in getting Penguin to put his memoirs out as a Penguin Classic. The Bard of Stretford is somewhere between Montaigne and More. Someone who has always been openly obsessed with turning himself into a “living sign” (and the Amazon blurb mentions the word “icon” twice) – is now officially an instant classic. Penguin say so. So there.

A flabbergasted literary world has rushed to remind Morrissey that he just hasn’t earned it yet, baby. But in actual historical fact he already has.

Before he found something much more rewarding to do, the young, lonely Steven Patrick Morrissey wanted nothing so much as to be a writer. From his box bedroom in his mother’s council house in suburban Manchester this autodidact who left school at sixteen typed out screeds to the NME, and pamphlets about his twin obsessions, glam punk band The New York Dolls and James Dean. His mother was a librarian, and he famously quipped later: “I was born in Manchester Central Library. In the crime section.”

But Johnny Marr came calling and Morrissey became one of the most unlikely, most literary of popsters – using pop music as a giant fax machine to tell the world the story of his life: insisting that his lyrics, which often “borrowed” from the writers he admired, be printed on the record sleeves. I wouldn’t be entirely surprised if – and part of me hopes – his memoir turns out to be just his collected lyrics, with some hand-drawn titivation in the margins.

And what lyrics! Morrissey is unquestionably the greatest lyricist of desire – and thus of frustration – who ever moaned. If a young Oscar Wilde, another one of Morrissey’s idols, had heard The Smiths he wouldn’t have bothered writing plays. He’d have formed a band.

But part of the drama of Autobiography, part of what makes his book such an event that provokes such curiosity from all sides, is that despite turning it into great art, and becoming a global star, the actual details of Morrissey’s private life have remained resolutely private. Which is a shocking, almost indecent achievement in a culture as sure of its entitlement to know everything as ours is today.

Perhaps it’s just sour grapes on the part of a writer who was never a pop star, but having created this mystique, this cherished iconic status through his art and through his quaint obsession with old skool stardom in an age of mere celebrity, can it, I wonder, survive confession? Can prose compare to bloody poetry? Will he kiss and tell? Will he settle scores? And has Penguin dared to edit him?

But most of all, will he finally say “sorry” for stealing away the hearts of a generation?

Oars Out For The Lads