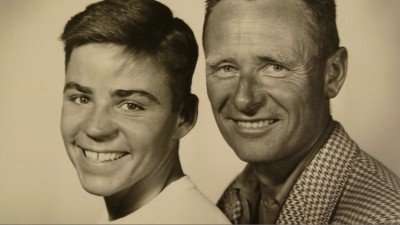 Contrary to what the pop songs tell you, the language of love is not universal. It really isn’t the same the world over or even on the same street. Everyone’s love affair is utterly unintelligible to everyone else. It’s perhaps the whole point of having one.

Which can make reading other people’s love letters a baffling if not slightly pointless experience. Katherine Bucknell’s The Animals (Chatto & Windus), a collection of letters between the famous British-born novelist Christopher Isherwood and his lover the American portrait artist Don Bachardy, who lived together openly as a gay couple in Hollywood at a time when most were closeted, isn’t pointless. But love does speak in animal tongues. Cloying Beatrix Potter animal tongues.Ki

Bachardy, who was just eighteen when a 48 year old Isherwood met him on a Santa Monica Beach in 1952, is ‘Kitty’, ‘Fluffcat’, ‘The Fur’, ‘Catkin’, ‘Sweetpaws’, ‘Dearest Darling Puss’, ‘Sweetcat’, ‘Snowpuss’, ‘Angel Lovecat’, ‘Velvetpaws’, ‘Sacred Pinkness’, ‘Sweet Longed-For Flufftail’, ‘Pink Paws’, ‘Beloved Fluffpuss’, ‘Whitewhiskers’, and ‘Claws’ – the latter epithet being perhaps the most salient to this reader of Bachardy’s waspish missives.

Isherwood for his part is ‘Horse’, ‘Drub’, ‘Drubbin’, ‘Rubbin’, ‘Dobbin’, ‘Old Pony’, ‘Dear Treasured Love-Dub’, ‘Slickmuzzle’, ‘Naggin’, ‘Drudgin’, ‘Drubchen’, and ‘Dearnag’. If this seems an unfair distribution of gushy epithets this is because it was meant to be. As Bachardy wrote in a letter dated 6 Feb 1961:

‘The horse Kitty loves has always been an old grey mare, so sweet and dear and never one of those greedy and faithless white stallions. And besides grey is more becoming to Kitty’s white fur. Two white animals would never do.’

The language of love may be unique to each couple, but one rule of sexual syntax everyone understands: there’s only room for one prima donna in one relationship.

Like many gay relationships, Bachardy and Isherwood’s was open though, perhaps understandably given the large age difference, more so on Bachardy’s side. ‘Dobbin’ often encourages ‘Kitty’ to enjoy strange saucers of cream, but is always anxious that Kitty return to his ‘basket’ and the primacy of their relationship not be threatened: ‘Dobbin is only happy if Kitty finds consolation – ONLY NOT TOO MUCH!’ Many of the letters resulted from separation caused by Bachardy’s prolonged dalliances with others abroad, such as the London theatre director Anthony Page.

Isherwood – who had a pronounced fear of the dark and hated being alone at night – attempts to explain and justify their campy, furry archetypes in a letter dated March 11, 1963:

‘I often feel that the Animals are far more than just a nursery joke or a cuteness. They exist. They are like Jung’s myths. They express a kind of freedom and truth which we otherwise wouldn’t have.’

The irony for the reader is that this is stated in a letter, written immediately after a face-to-face row, which dispenses with the Kitty-Dobbin shtick and stands out as perhaps the most direct, heartfelt and unmannered letter in the collection – and one that suggests that much of the time, like many couples, they are not so free or true after all. As Isherwood writes:

‘Oh – I am so saddened and depressed when I get a glimpse, as I do so clearly this morning, of the poker game we play so much of the time, watching each other’s faces and listening to each other’s voices for clues. I was so happy the other day when you said that about Dobbin having been a jailer and now being a convict…. Masochism? Oh, Mary – what do I care what it’s called.’

In her excellent introduction Bucknell does a skilful and brave job of trying to interpret the lovers’ talk for the reader. Apparently Bachardy reminded Isherwood of his younger self – and indeed there was a remarkably strong, possibly slightly disturbing physical similarity. The letters end in 1970, and Isherwood died in 1986, survived by Bachardy.

But thanks to The Animals Isherwood’s devotion lives on. As a typical sign-off from Dobbin put it:

‘Love from a devoted old horse who is waiting day and night with his saddle on, ready for his Kitty’s commands.’

The Well-Scrubbed Purity of the Past