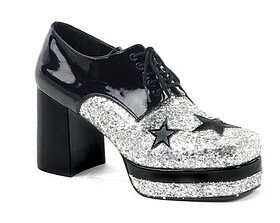 ‘Metrosexual goes mainstream as men outspend women on footwear’ announced a headline in the Daily Telegraph last week, dealing a death blow to yet another stand-up comedian gendered generalisation stand-by.

I have to admit that even metrodaddy was somewhat taken aback that men have overhauled women in the shoe fetishism department, and so quickly. But this may just be because I’m over 45 – apparently the one age group where men still spend less than women on footwear.

New research from the consumer analysis outfit Mintel shows 25-34 year-old males spent an average of £178 on everything from shoes to trainers and sandals in the past year, while women in the same age bracket spent £171. Among 16-24 year-olds the gender ‘reversal’ is even more noticeable, with younger men spending 15 per cent more than women of the same age. Men aged 35-44 also spent more: £157, against £138 for women.

The man from Mintel didn’t mince his words about what this all means:

Richard Cope, the market research specialist Mintel’s principle [sic] trends analyst, added the shock figures confirmed that metrosexuality was now “in the mainstream.” He insisted that younger men than are more worried than ever before about their appearance, are taking more time to “groom” and staring at the mirror.

He said: “Taking pride in and taking greater confidence from maintaining a well groomed appearance now defines what it is to be ‘a man’ in today’s society.

“Rather than being in a minority, men who buy grooming products to boost self-esteem or feel more attractive are now in the majority.”

He added: “Metrosexuality has successfully moved into the mainstream.

“We’re seeing men occupy previously ‘feminine’ space in the home – spending more time on housework and parenting – but also as consumers, embracing yoga, beauty goods, and the act of shopping itself.”

Quite so. Metrosexuality is about men doing and using and being things previously seen as ‘feminine’. About breaking free of rigid gender stereotypes and becoming everything – and buying everything and anything that makes you look/feel better. Why do young men love shoes? For the same reason women do.

But there’s a paradox here: Now that young men spend more than women on shoes, hair dryers, holiday clothes, gym membership and supplements – and almost as much as on clothes and cosmetics – they are also earning less than women of the same age.

Are they all living with their mothers?