The Anti-Christ Has All The Best Tunes

The P2P revolution is like Gutenberg plus Protestantism plus Punk all rolled into one highly compressed file, by Mark Simpson 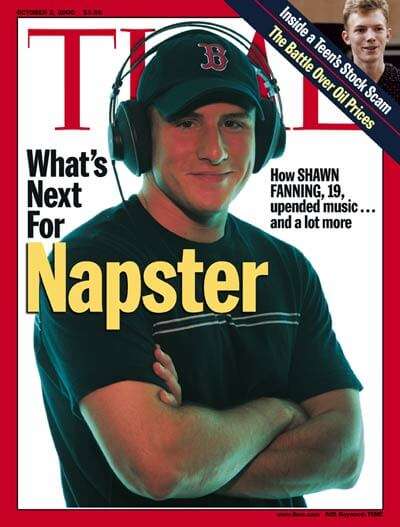 Perhaps the best thing about digital music is that it doesn’t only make listening to music more convenient and less irksome: it actually does part of the tiresome job of listening for you.

ISO-MPEG Audio-Layer-3 – mercifully shortened to MP3 – is the digital file format for music exchanged on the Internet and very possibly the acronym of doom for the record industry. It is a form of extreme algorithmic compression of sound files that uses “psychoacoustic” models that account for what listeners actually notice when they hear music or other sounds. “Unnecessary” data is stripped away to make the file as small as possible to facilitate easier storage or uploading and downloading. In other words, MP3 anticipates and interprets mu­sic for the listener before she or he actually hears it.

Of course, this job used to be performed by record companies, with their A&R men and marketing departments. But, like so many before them, they appear to have been automated out of a job—dis­pensed with by algorithms, the Internet, and a bunch of geeky kids in their bedrooms. A whole class of intermediaries and authorities have been liquidated.

The Internet has often been compared to Gutenberg in its im­portance. However, after reading John Alderman’s detailed account of the online music revolution, Sonic Boom: Napster, P2p and the Battle for The Future Of Music, John Alderman, I have a hunch it’s more like Gutenberg plus Protestantism plus Punk—all at once, in a highly ‘compressed’ form.

Thanks to the personal computer and the Internet, every man is now at home with his god—downloading The Sex Pistols’ EMI. The corrupt, uncool suits and cassocks who used to intercede have been swept aside and the Word can be enjoyed directly and free from distortion, com­pressed by pure, clean mathematics, not dogma. The free ex­change of information—which is all that digital music amounts to in cyberspace—is the credo of what one might call the Nettist Movement: the true believers in the web and everything it represents.

To many Nettists, anyone who attempts to stand in the way of this Reformation Superhighway is the Papist Antichrist, or the fascist re­gime. And of course this means anyone who doesn’t share their holy zeal—anyone who is non-Nettist. Record companies are about as non-Nettist as you can get. After all, they have most to lose from the free exchange of digital music. All their frightfully expensive CD printing presses, distribution deals and back catalogues melt at the press of a button in someone’s bedroom. If indulgences no longer have to be bought but can be plucked from the air instead, then where is the temporal wealth and power of the record business to come from?

For the record companies, the leaders of the MP3 revolution are seen as heretics who have to be made examples of; burnt at the legal stake so that others may not be tempted to stray. Against the cries for info freedom, their lawyers invoke the Mystery of copyright. Digitising music, just as printing the Bible in German did, puts it within the grasp—and control—of the laity. And like the leaders of the Counter-Reformation, they see themselves as acting in the interests of the people they burn.

You think I exaggerate? You think I take this Reformation, Counter-Reformation metaphor too far? Well, just listen to Edgar Bronfman Jr., heir to the mighty if not exactly holy Roman Seagram Empire, quoted here by Alderman: “I am warring against the culture of the Internet, threatening to depopulate Silicon Valley as I move a Roman legion or two of Wall Street lawyers to litigate. I have done so… not to at­tack the Internet and its culture but for its benefit and to protect it”.

Is Shawn Fanning, the boy who at nineteen founded Napster, the famous MP3 file-sharing “peer-2-peer” online service, a Luther for our times? And is Napster his Wittenberg Theses, nailed to the door of the music industry? For a while, in our accelerated culture, it looked that way. Twelve months after the launch of Napster in June 1999, there were over 200,000 souls praying in his church nightly. By the end of 2000 there were over 50 million registered users and Fanning was a very famous young man indeed; his criminally young, beatific face shining out from the cover of magazines.

But Fanning was no ideologue or evangelical; merely an American boy who saw a need which he believed his software could fill. From his time spent chatting on the Net, he knew that people were eager to trade music files, but find­ing good music was the problem. He joined with two online pals, only slightly older than himself, to solve this with smart code. To­gether they wrote the Napster program, which allowed users to share files by plugging their computers, in effect, into a giant, global network.

Because Napster hosted no music itself (the files were stored on user’s computers and traded), it was hoped by Fanning et al that they would be free from any taint of blasphemy and heresy in the form of copyright violations. They were very wrong. In the opening blast of what was to prove a merciless barrage, the fearsome Recording Industry Associa­tion of America filed a copyright lawsuit against Napster in Decem­ber 1999, just six months after it had launched.

And who could blame them? For the record industry Napster was a disaster of, well, biblical proportions. Practically a whole gen­eration of college kids who didn’t even have to pay for the college computers or the Internet connections they downloaded the MP3 files with, stopped buying CDs. Not only was Napster free, Napster was easier than going to a record store and it was even easier than ordering CDs online. Emusic.com, an e-tailer of digital music, was reduced to giving away MP3 players (worth $150) to anyone who bought just $25 worth of music.

A year and a half on, under the epic weight of various lawsuits and in­junctions brought by the record industry and Lars Ulrich of Metallica, who famously discovered that three unfinished versions of a song he had been working on had been traded on Napster (along with his entire back catalogue), the Church of Shawn Fanning is not what it was. Napster got into bed with record giant Bertlesmann— one of the few record companies to respond to the MP3 revolution with anything other than public burnings—in an attempt to turn Napster into a legal, mainstream, subscription-only service which, crucially, paid royalties to performers.

The issue of intellectual copyright and rewarding artists is a thorny one and not so easy to dismiss as “record company greed.” Ulrich is certainly not the only professional rock and roll rebel to take indig­nant offence at the “criminality” of online file trading. Ultimately though, the feelings of artists or even record companies may not count for very much. In a sense, file trading is what the Internet was designed for—and it was also designed to survive some­thing even more destructive than a music company lawyer: nuclear war.

There is perhaps a tad too much jargon in Sonic Boom for the IT agnostic, and the narration doesn’t always quite match the raciness of the title or the import of the revolution it docu­ments, but it’s a valuable, insightful book for anyone interested in where our cul­ture is headed.

The Nettist Movement itself continues its onward march undaunted. Napster and Fanning may have recanted, but most of his 50 million disciples that Bertlesmann hoped to convert into more orthodox customers have left and are now praying at lesser known online P2P sites. And there are always new, more convincing Luthers. Programmer Ian Clarke, for instance. He believes vehemently that information should be free. But he isn’t going to try too hard to convince you with words; he’s won the argument already with code by designing a system called Freenet which allows users to post and retrieve files with complete anonymity. Unlike Napster, there is no central server—this is a church which really has no walls and whose congregation is invisible.

Clarke likes to tell reporters that he couldn’t take Freenet down if someone put a gun to his head. Which is all very well, but Alderman doesn’t tell us what Clarke would do if Edgar Bronfman Jr. sent a Roman legion of Wall Street lawyers after him.