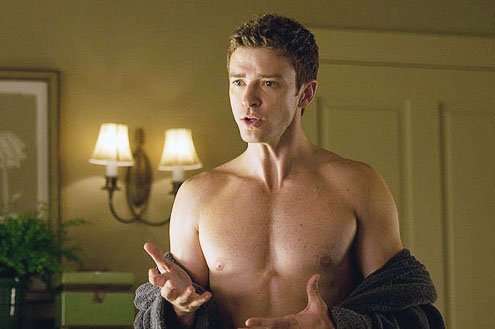 Mark Simpson interviewed by Clement Ghys in France’s Liberation newspaper about the evolution of his metrosexual offspring – and Justin Timberlake’s ass. 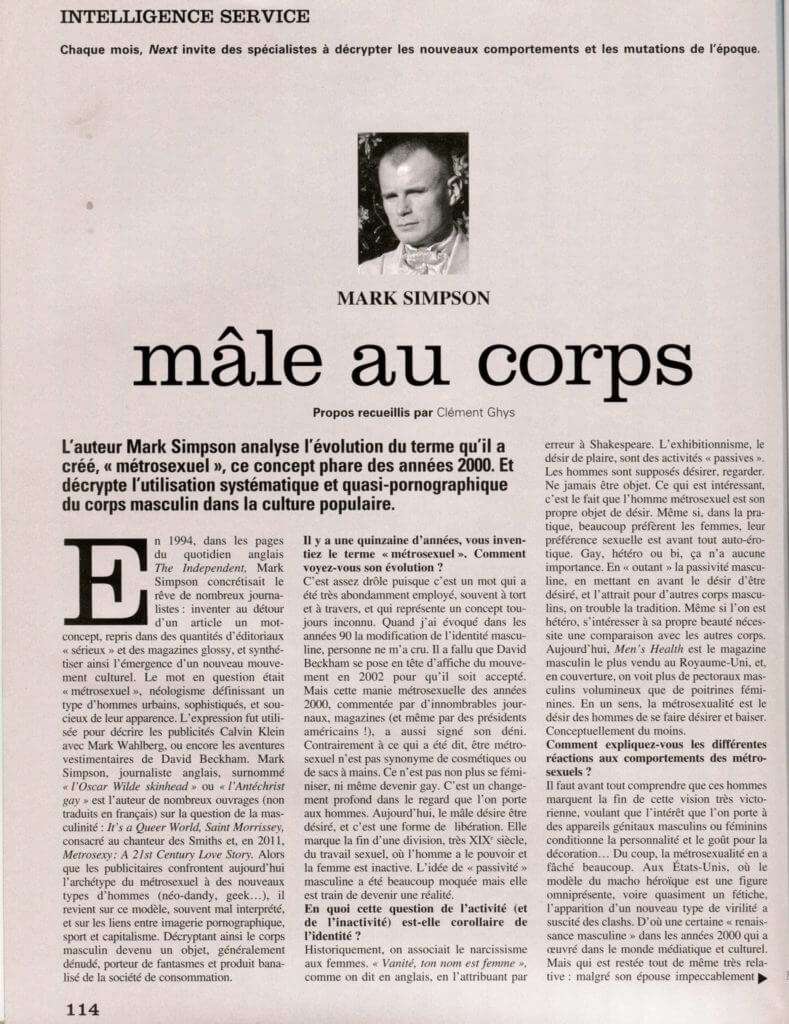 CG: In 1994, you coined the term “Metrosexual”. Looking back, how would you say the concept has evolved? In what way do you find this definition still relevant?

More seriously, metrosexuality is still relevant all these moisturised years later because the breadth and depth of the masculine revolution it represents has been obscured – often quite deliberately – in a lot of chatter about facials, ‘manbags’ and flip-flops.

Ironically, out-and-proud male beauty isn’t itself skin-deep. Metrosexuality represents a profound change in how we look at and think about men. The emergence from its closet of the male desire to be desired has revolutionised the culture and also opened up the options of what a man can be.

For all its faults, metrosexuality represents a kind of ‘male liberation’. It’s the end of the sexual division of labour in looking and loving – of bathroom and bedroom labour. And of ‘sexuality’ itself.

Male ‘passivity’ is the flip side of female ‘activity’ – and should be welcomed or at least accepted as much as the latter, but is mostly mocked instead. Metrosexuality has too often provoked a kind of reverse sexism.

How has the metrosexual man blurred the boundaries between the “gay” and straight” labels?

Irretrievably. To quote metrodaddy’s own definition of the metrosexual:

‘He might be officially gay, straight or bisexual, but this is utterly immaterial because he has clearly taken himself as his own love-object and pleasure as his sexual preference.’

There’s nothing ‘straight’ about metrosexuality. Even though most metros definitely prefer women in bed.

Narcissism was supposed to be the female quality par excellence. ‘Vanity thy name is woman’. It’s considered ‘feminine’ because inviting the gaze/exhibitionism is ‘passive’. Likewise homosexual men were considered deviant and ‘womanish’ because of their – real or perceived – passivity. In a sense, homos existed to lock up male passivity in the homo body and keep it away from ‘normal’ men.

Metrosexuality queers all of that. By outing the ‘passivity’ in men, their desire to be desired, and also their keen visual interest in other men and their bodies. It’s precisely because of this blurring between gay and straight that many older and more traditional types have reacted with phobic and often hysterical hostility to metrosexuality. What indeed is straight a man to do – who in fact is he to be – if he can’t define himself as NOT a gay?

Particularly in the monosexual US, which had a gigantic national nervous breakdown over the metrosexual in the mid-late Noughties, precisely because of the queerness of metrosexuality – producing a so-called ‘menaissance’ backlash against it.

Though the backlash was largely a phoney one. Metrosexuality continued to conquer that conflicted continent, albeit on the down-low, and even the US is now led by a sveltely handsome man who makes the world wait on his morning workout and who, despite Michelle’s prettiness, is in many ways his own First Lady.

Even in less traditionalist countries like Britain there have been reaction-formations too, but less pronounced, and the younger generation has generally been quicker to seize the freedom from gay/straight, male/female ghettoes and binaries that metrosexuality offers. Recent research claimed that most hetero young men at university enjoy kissing their male friends full on the lips as an expression of affection. Quite a turnabout for an Anglo country that sentenced Oscar Wilde to three years hard labour!

Recently in The Guardian, you said that “the metrosexual revolution has taken an increasingly physical, sensual form”. Can you comment on that?

Metrosexuality is consumerist and fashion-orientated, but it isn’t necessarily about clothes. In fact, these days it’s perhaps less about clothes than the ultimate accessory: the body. It’s almost as if male nakedness has been abolished at the very moment that acres of male flesh are displayed everywhere you look. Young men have invested a great deal of time, money and supplements ‘fashioning’ their bodies into something they ‘wear’ – and show off. Shaven (often everywhere), sculpted, intricately tattooed, pierced. Never, ever unmediated.

The near-global hegemony of ‘Men’s Health’ magazine with its Photoshopped covers of men’s sculpted torsos bears testimony to this, along with the massive popularity of reality shows such as ‘Jersey Shore’, which feature young men like Mikey Sorrentino showing off their tits and abs.

In this they’re also following in the footsteps of tarty sporno stars like David Beckham, Cristiano Ronaldo and Rafael Nadal, whose bodies are marketed and promoted by corporate consumerism.

A whole generation of young men have grown up with metrosexiness. As the recent hit LMFAO single that is a kind of metrosexy anthem puts it: ‘I’m sexy and I know It’.

In the same article you evoked the highest and heightened interest of men in their own bodies (diets, steroids, gyms). What do you think is driving this?


It’s partly an effect of post-industrialism. It’s interesting that its most pronounced amongst young working class males who in the past might have looked forwards to a life of selling their labour and working on other men’s property, but who now instead of going to the factory go to the gym to labour on their own bodies and turn them into a product. Their bodies remain the only thing they own – their only asset.

But now they turn their bodies into a commodity themselves. By making themselves desirable they give themselves value in a consumerist world. Not for nothing are athletes such as Beckham who willingly strip off and push their packets down our throats on the side of buses often from a working class background.

It’s also the effect of course of an increasingly visual world – of webcams, facebook, camera phones, widescreen HD TVs, and reality TV. The desire to be desired is also about the desire to be noticed. To be wanted. To be popular. To succeed.

In recent years, male bodies have been very much shot on screen.
Sometimes, even more than female bodies. I’m thinking of Ryan Gosling in comedies such as Crazy Stupid Love, Justin Timberlake in Friends With Benefits or Alexander Skarsgard in the TV show True Blood. How do you explain this?


Friends With Benefits was a feature film all about Justin’s ass! It was in almost every scene. We even heard from his girlfriend that he likes a finger up it. His character was working as an art-director for American GQ but had a body by Men’s Health. How metrosexual can you get!

Women, who make up the majority of TV viewers, have discovered an appetite for looking at men’s bodies on screen. In some ways the sexy scantily clad male has become a symbol of women’s consuming power and their new assertive sexual appetite. True Blood especially seems to ‘feed’ on that.

But men also as we’ve seen also enjoy looking at other men’s bodies, and admiring, desiring and aspiring to them.

What do you think of this quote? The actor Thomas Jane said, after appearing naked on screen, “I now know what it’s like to be a woman, because I now have to say during a conversation, ‘Hey, my eyes are up here!’ “

It’s a funny quote, but it’s interesting that the sex of the person he’s talking to with wandering eyes is left unstated.

Men are ‘sex objects’ now too. Some might put it in terms of ‘men are the new women’. But actually what metrosexuality has done is to break down the boundaries between ‘men’ and ‘women’.

Ironically many feminists are completely blind to this phenomenon of men willingly objectifying themselves and other males. Or they pretend it’s a marginal thing in no way comparable to the objectification of women. When clearly in mainstream media, particularly TV and cinema, it’s at the very least the equivalent of female objectification.

Male nudity and sex is now a full advertising argument. How do you explain David Beckham’s “package” on the Armani/H&M camaigns? Or the homoerotic Dolce & Gabbana ads?

Sporno represents an intensification of metrosexuality. Where early metrosexuality was soft-core, sporno is hardcore. Metrosexuality is now so mainstream and so ‘normal’ that male coquettishness isn’t in itself likely to turn heads. So instead you have to promise the punters a gang-bang in the showers. Or, more usually, a prone, passive image of a sporting star with their legs apart literally making themselves available for the viewing public.

And of course the ‘hardcore’ aesthetic of sporno is flagrantly gay.

Some have tried to dismiss all this as some kind of conspiracy by gay fashionistas to corrupt young straight men and ram their proclivities down their throats. If it is, it’s worked. Spectacularly. Sporno is the aesthetic of the 21st Century.

Likewise, metrosexuality is now so mainstream that to point to someone as a ‘metrosexual’ these days is almost redundant. That’s why I called my latest collection ‘Metrosexy’ – because what we’re talking now is not a ‘type’ but rather a whole new male way of looking and being looked at.

Do you think that gay imaging has now completely entered (predominantly straight) society? How do you explain the fact that it is now a commercial tool?

Well as I say, it makes people look. Which is quite an achievement in this jaded age.

But also ‘gay’ imaging is inevitable once the male body is commodified, and once men begin to objectify themselves and other men. This is part of the reason why it was banned or resisted for so long.

It’s impossible to straighten this stuff out. Of course, people try. Men sometimes pretend that their self objectification is ‘strictly for the ladies’. But even if this weren’t a bare-cheeked lie it wouldn’t solve anything. Because the ‘queerness’ is in the male passivity. It’s about as ‘straight’ as being fucked with a strap-on.

It even turns out that many women have male-on-male fantasies which increasingly commercial culture is pandering to. In other words, men are being encouraged to ‘act gay’ to turn the ladies on.

More cynically, or perhaps more realistically, gay ideals of male beauty and perfection are largely unachievable. That’s really the point of them. They promise endless desiring – and also anxiety. Which is what consumerism needs….

The Few, The Proud: A Jarhead memoir of the First Gulf War

‘Calvin Klein is my father…’