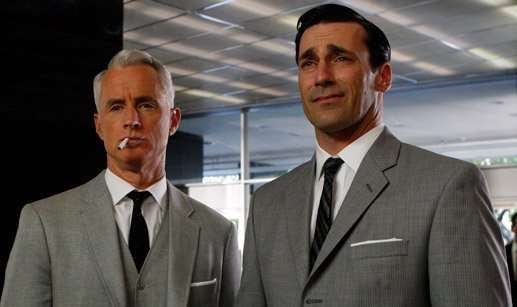 The return of the (well-dressed) repressed

Coming across this old review of Juliet Mitchell’s ‘Mad Men and Medusas’ (Independent on Sunday, 2001) reminded me that pretty much all the main characters in the TV series of the same name launched in the late Noughties are hysterics, but most especially Madison Avenue’s Don Juan, aka Donald Draper. I hope Mitchell is getting a royalty.

A touch of hysteria can make you a real hit with the ladies. If you play your symptoms right, eminent feminist scholars might even end up arguing over your body years after your death.

Robert Connolly was treated for hysteria in 1876. He suffered from an unfortunate compulsion which forced him to swing his arms from side to side like a pendulum. Elaine Showalter, the mediagenic American feminist, held him up in her 1997 book ‘Hystories’ as an example of how hysteria is a response to a situation that is untenable – pointing out that he worked as a watchmaker she ‘read’ his body as an expressing his distaste for the monotonous, finicky work he was unable to articulate through language. Hysteria, in other words, is the corporeal protest of the powerless and inarticulate working class, women and blacks; literally, the symbolic sigh of the oppressed.

It sounds plausible. It certainly sounds fashionable – since it’s saying that hysteria, like everything else these days, is ‘about power’. But in ‘Mad Men and Medusas: Reclaiming Hysteria’ Juliet Mitchell the not-so mediagenic British feminist psychoanalyst disagrees. Inarticulate frustration at his job is not enough to explain Connolly’s symptoms, she argues (and besides, runs the risk of middle class condescension). Politics has rendered him a cipher for social forces. What is missing is the internal compulsion producing his symptoms: he could not stop. Mitchell speculates that Connolly may have been aware of Voltaire’s comparison of God to a watchmaker. Such a hubristic identification would, explains Mitchell, have had to have been repressed. When it returned from the failed repression – as such wishes do – it made a compromise with the ego which had repressed it in order to allow it’s expression. ‘With the wit of the unconscious, the watchmaker who wants to be God finds that, as Voltaire said, it is God who is the watchmaker.’

This poetic interpretation may or may not explain Robert Connolly’s hysteria, but it certainly explains why Showalter is much more likely to be invited on Richard and Judy or, for that matter, Newsnight than Mitchell. For her part, Mitchell explains that whatever the specifics of the case, a conflict of a wish for omnipotence and a prevention of it would be needed to explain Connolly’s – or any hysteric’s – movements. In other words, what’s needed is psychoanalysis.

And, at a time when many seem to want to be unconvinced of psychoanalysis’ value, Mitchell’s book makes a convincing argument for this. Not only because ‘Mad Men and Medusas’ offers a deeper, subtler – and much more difficult – understanding of hysteria than the familiar victim-victimiser Manichean narrative of American feminism, but also because it admits that psychoanalysis itself is part of the problem.

Hysteria was recorded and written about for 4000 years before disappearing in the earlier part of this century. Today the term is almost unheard of in clinical usage. However, its many manifestations throughout the ages are still familiar: sensations of suffocation, choking, breathing and eating difficulties, mimetic imitations, deceitfulness, shocks, fits, death states, craving and longing.

Hysteria has of course historically been strongly associated with women. The Greek doctors talked of a ‘wandering womb’ requiring treatment, Christian witchfinders of a ‘seduction by the Devil’ requiring drowning or burning. After the Renaissance, hysteria was remedicalised and, following the vogue, located in the brain, albeit a female one. In the Eighteenth Century refined women were quaintly described as suffering from ‘the vapours’ (which emanated primarily from the brain but were somehow supplemented by especially debilitating vapours from the womb). By the Nineteenth Century asylums were chock full of hysterical women. By the end of the Twentieth Century, no one was diagnosed as having ‘hysteria’ any more. For Mitchell this is not something to be celebrated: defying postmodern correctness, she asserts that hysteria is as universal and as transhistorical and as complex a phenomenon as ‘love’ and ‘hate’ (which are, it so happens, both constituent parts of hysteria).

So who kidnapped hysteria? It would appear that embarrassed masculine pride bundled it off the clinical scene. She argues that hysteria disappeared because of the intolerability of the idea of male hysteria to men. Eighteenth Century science’s relocation of hysteria in the brain, even in one intoxicated by the presence of a vagina, meant that hysteria was no longer so hygienically confined to the female of the species. Ironically, Nineteenth Century psychoanalysis, which was born out of the study of hysteria, hastened the ‘disappearance’ of hysteria by universalising hysteria and establishing it as a male as well as a female characteristic.

The shining cornerstone of psychoanalysis, the Oedipus Complex, was fashioned out of the study of male hysteria – Freud’s own, as well as that of his patient. However, Mitchell powerfully argues that Freud’s need to suppress his own ‘little hysteria’, as he famously called it, and his ambivalence about the early death of his younger brother, led him to overlook the importance of sibling relationships and the threat of displacement they contain, which are felt before the Oedipus Complex. ‘When a sibling is in the offing,’ writes Mitchell, choosing a word which could be interpreted as an example of the ‘wit of the unconscious’, ‘the danger is that His Majesty the Baby will be annihilated, for this is someone who stands in the same position to parents (and their substitutes) as himself. This possible displacement triggers the wish to kill in the interests of survival. The drive to inertia [the death drive] released by this shock becomes violence. Or it becomes a sexual drive, to get the interests of all and everyone for oneself.’

As the title Mitchell gives to one of her chapters ‘Sigmund Freud: A Fragment of a Case of Hysteria in a Male’ suggests, Mitchell believes that Freud’s hysteria was not so ‘little’. Again bucking the trend, she doesn’t reject the importance Freud’s Oedipus Complex, which she admits is difficult to overstate, but argues that the focus on generational relations has blocked the understanding of lateral ones.

Mitchell illustrates the importance of lateral relationships by reference to the first World War and the epidemic of male hysteria amongst the combatants: the ‘shell shock’ victims (so labelled partly because it was less humiliating to the men concerned than being called an ‘hysteric’). However, what has been forgotten is that the wartime male hysteric has not only been a victim of aggression from enemy action but has also been an aggressor. What the soldier may also be suffering from ‘is the knowledge that he has broken a taboo and that in doing so he has released his wish to do so – his wish, his “wanting” to murder, to kill his sibling substitutes.’

The so-called ‘negative’ or feminine Oedipus Complex, in which a man wants to be his mother and desires his father was elaborated by Freud as being as universal as the ‘positive’ one – but it never received as much attention in the theory then or especially since, effectively relegating it to the unconscious. ‘But it has surfaced again and again as homophobia…’ complains Mitchell. However, beating one’s breast about homophobia is to miss the point: ‘The attention now drawn to this homophobia means that we miss the crucial importance of hysterophobia in the theory as a whole.’

The negative Oedipus Complex, a passive relation towards the father, had to carry the weight of explanation of both male hysteria and homosexuality. ‘Too often the two have become confused. Hysteria, to the contrary, is essentially bisexual,’ explains Mitchell. (In an eerie confirmation of either great art’s psychoanalysis or psychoanalysis great art, Pat Barker’s ‘Regeneration’ trilogy fictional shell-shock victim ‘Billy Prior’ was bisexual and sexually compulsive.)

After the First World War the role of sexuality in hysteria and then hysteria itself was replaced by trauma (which is nowadays used to explain almost everything). But how to account for what Mitchell describes as ‘the rampant sexuality of war’ – which was recently illustrated by he publication of servicemen’s letters from The Great War which talked about ‘hard-ons’ when bayoneting the enemy? Mitchell posits an apparently ‘normal’ male war hysteria – a non-reproductive sexuality involving killing, mass rape and promiscuity: the death drive attaches itself to sexuality. The Oedipalization of all relationships meant that men at war and on civvie street could avoid being seen as hysterics – they were either homosexual or ‘normal’, that is heterosexual, and hysterical women merely appeared ultrafeminine. ‘In hundreds of clinical accounts… the man who displays hysterical characteristics is suffering from “feminine narcissism”, “feminine passivity” or homosexuality. In the eternal struggle to repress male hysteria, these are the new pathologies.’

Perhaps most interesting of all is Mitchell’s rescue of the Don Juan myth from the neglect that traditional psychoanalysis has condemned it. In the myth, Don Juan, a serial liar and seducer of women, kills the father of one of his conquests and is finally led to Hell by a stone statue of his victim. Sexuality and murder are completely/hysterically intertwined in the Don Juan story in a way that they are not in the Oedipus myth. Don Juan, the son, kills and defies the father substitute who has done nothing to him, where Oedipus defies then kills the father who has twice threatened to kill him (the displacement from actual father to father substitute is a typical hysterical substitution).

According to Mitchell, the repression of the Don Juan story, the story of male hysteria par excellence, has allowed all psychoanalytic theory to establish male sexuality as the norm and in doing so avoid its analysis. ‘Don Juan, the male hysteric, was absorbed into Freud’s own character; repressed and at the same time identified with.’

What is repressed returns. Now Don Juan is everywhere. The prevalence of the male hysteric ensured he became normalised as the post modern individual – a latter-day Don Juan, uninterested in fathering, just out to perform.’ The post modern Don Juan, like the original, does not take women as a love-object but instead makes a hysterical identification with them. Loaded lad is literally a ladies man.

However, for all her efforts to make hysteria visible again, Mitchell does not want to quarantine it. ‘Hysteria is part of the human condition,’ she states, ‘the underbelly of “normality”:

‘Calvin Klein is my father…’