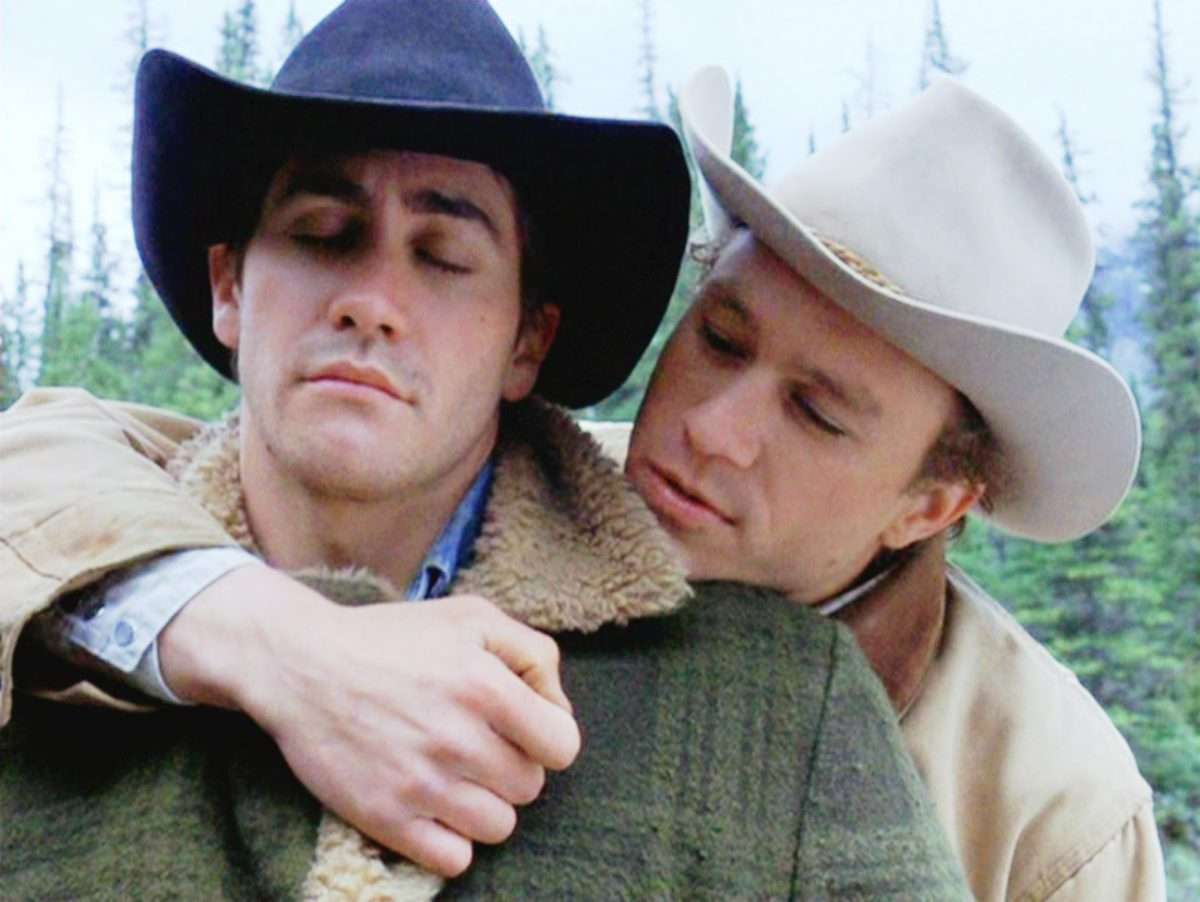 The Unbearable Boredom of Brokeback Mountain

Following the discussion of ‘Brokeback Mountain’ in relation to The Last Gay Picture Show I thought I’d post my disenchanted review of it from 2005. As you’ll see, although I roped it in with the other Big Gay Movies in that Out essay – and although it certainly has been received and celebrated as one – I’m not entirely sure it is really a ‘gay movie’. I’m certain though that it’s a very, very boring one….

‘Brokeback Mountain’, front-runner in the Oscar nomination race and big winner at the recent Golden Globes has been dubbed the ‘gay cowboy movie’. Mark Simpson argues it’s more metro than homo and explains why its unconvincing nature is probably the reason for its success

Is there a support group for people who didn’t like ‘Brokeback Mountain’? We must, if the rave reviews and newspaper reports are to be believed, be a very tiny – not to mention vulnerable – minority. Am I dead inside because I didn’t experience the torrent of emotions I’ve been reading about in newspapers and in movie forums? Am I as emotionally crippled as Ennis because I didn’t blub and hug after sitting through this ‘visceral’ movie, but instead wanted to go and ‘help with the round up’? Am I suffering from internalized homophobia?

Probably all of the above. But this doesn’t mean that this film which has become a phenomenon, isn’t as tedious, mawkish, lifeless, unconvincing and bizarrely hypocritical as I found it to be. I wish now that I’d left after the first 15 minutes with the two bored, gum-chewing teen girls in front of me at the multiplex and gone shopping with them for the latest Westlife album instead. There would at least have been more sex.

OK, so there’s a hurried joyless near-rape in the dark at the beginning, but we’ve seen all that before in more detail in prison movie films like Shawshank Redemption. Although this part is true to Annie Proulx’s original short story, the only sex scene in this ‘love movie’ seems to owe more to director Ang Lee’s shame and impatience about MANSEX than Ennis’. While Proulx allows our cowpokes other sex scenes in which they actually enjoy ‘love-making’, this filmic essay on homophobia and its terrible toll goes out of its way to shield us from what it is that these two men have together or what it is that they do when together – or why they would bother to go to the trouble of trying to relive it every year for decades. Across thousands of miles.

Even when they kiss, it’s carefully shot so that we never really see them kiss, the shadows in the tepee artfully falls across their mouths, or if somewhere better lit they appear just to be pushing their faces together, lips and teeth gritted. This makes the scene in which Ennis’ wife spies these desperately ‘closeted’ guys ‘kissing’ outside her home all the more unconvincing and ironic. The realisation suddenly hits her: ‘Omigod! My husband is a fauxmosexual!’ No wonder she’s distressed.

Their boss also clocks the lover boys from a distance. But why their boss would assume they were queer because they liked to wrestle with their tops off rather than wannabe Abercrombie and Fitch models I don’t know; maybe he had special binoculars. But I have to say that I sat right at the front of the theatre and I’m still not really sure what the hell they get up to on Brokeback Mountain. They don’t talk much. They don’t shag. They don’t kiss properly. As Ennis’ wife complains, ‘You go fishing but you don’t bring back any fish.’ The film tells us they’re lovers. Insists that they’re lovers, goddammit. But fails utterly to show it.

Perhaps I’m merely a jaded homosexual. Perhaps I’ve seen too much. Perhaps it’s absurd of me to expect a proper snog between the lovers in a ‘love film’, especially in a film that is telling us over and over again in painfully didactic fashion how bad homophobia is and a film which has been trumpeted for its ‘courage’. But in the small provincial town in England’s equivalent of Wyoming where I now live, I’ve several times seen (or rather stared at) drunken young soldiers snogging one another, ‘for a laugh’, tongues and everything, in the middle of crowded pubs, much more convincingly, passionately and lingeringly than these actors who have been told by a thousand interviewers how ‘brave’ and ‘committed’ they were to do these scenes.

But then, there’s not much realistic about this film. Even the impassively beautiful Wyoming countryside seems to have been wrapped in cellophane and Brokeback Mountain a big ribbon bow stuck on top of it. The boys are also very appetising, but while Heath Ledger turns in a fine performance with an almost impossible script and bloodless directing, both of them are too pretty – Jake Gyllenhaal in particular, lovely as he is, looks too metropolitan, too confected, too Details fashion-shoot with a Western theme. By the time he reaches the 70s he looks he like the cowboy out of the Village People: the same haircut, the same black moustache, the same Stetson. But maybe this shouldn’t be so surprising since the cowboy from the Village People, I discovered later, was the ‘gay cowboy consultant’ on this metro-cowboy movie; very Queer Eye For The Western Guy. (Personally, I wished they’d hired Nancy Walker, director of ‘Can’t Stop the Music’ in place of Ang Lee).

‘Brokeback’ is not a serious exploration of rural retrosexuality and its discontents, and certainly not a love story, but rather it’s feature-length propaganda for contemporary, metropolitan metrosexuality. It is an attack on retrosexual repression in general and old-style, ‘outmoded’ stoic masculinity in particular. This is the real reason for its tremendous, zeitgeisty popularity.

Both cowboys, Ennis in particular, are prisoners of their problems with expressing feelings: homophobia, internal and external, is just the biggest symbol of this. Their fat bald boss is an unfeeling bigot. Ennis’ father took him to see the castrated corpse of a local queer when he was a small boy (‘for all I know he mighta done it himself’). Jack’s abusive father is uptight, cold and resentful. His father-in-law is a bullying buffon (who turns out to be a coward for good measure).

None of the older males in this film are fully human – because they aren’t in touch with their feelings. They are all twisted, mean and nasty. Jack and Ennis, a product of that world, are stunted too; they’re just not so mean and nasty. This is why they are also the only attractive males in Wyoming. Their desirability is proof to a modern, metrosexual audience of their sympathy, of their goodness, of their modernity, of the awfulness of their retrosexual predicament.

Because retrosexuality rather than homophobia per se is the real target of this film’s didacticism, the emotional hobbling is hetero as well as homo. Ennis is portrayed as someone who is not just closeted about his passion for Jack but closeted in all his relationships. Whenever confronted with the need for a commitment or a demonstration of love, either for Jack, his wife, his daughter, his new girlfriend after his wife divorces him, he starts mumbling ‘ahh don’t know… roundup is comin…’. Fear and loathing of homosexuality, of male emotionality and sensuality, of explicit tenderness between men is presented as a continuum.

Which, to some degree, it is. As the ‘father’ of the metrosexual, I have some sympathy with some of the ideology behind this film, if not the execution. And at least in ‘Brokeback’ male sensuality, aestheticism and homoerotics is not displaced into flip-flops and facials and appropriation of stereotypically effeminate homosexual traits as it was in the spayed marketing version of metrosexuality – even if it is somewhat fetishized here into jeans, stetsons and carefully beat-up pick-up trucks.

But dress it up purdy or plain, or call it by any other name, like the marketing version of metrosexuality that preceded it, ‘Brokeback’ is also an accessorisation of homosexuality. This is effectively a film about two straight men who have a homosexual love-affair. After all, the two protagonists are married, the actors who play them are straight, as is the director, the author of the short story it’s based on, the male-female screenwriting partners, and the vast majority of the audience. No wonder they felt they had to hire the gay cowboy from the Village People as fashion consultant. Even the sex is ‘straight’ – there’s rather more hetero sex than homo. ‘Brokeback’ is literally acting out the culture’s current fascination with homoerotics and male sensuality. Which, in itself, is no bad thing. Homoerotics and male sensuality are not the unique property of homosexuals. In fact, they make up a small fraction of those human beings who are affected by these things.

And yes, the reticence of the film in regard to actually showing Jack and Ennis’ love for one another, either sexually or in any other way, and its generally unconvincing air, may not be entirely down to Hollywood’s nervousness or hypocrisy. If their love for one another is merely symbolic, to actually show it instead of just asserting it might diminish its universal message.

But what makes a film a cultural phenomenon doesn’t necessarily make it any good. For me ‘Brokeback’’s metro-cowboy propaganda is right smack dab in the place where it’s supposed to have a big butch bleeding heart and is the very thing which makes it so disappointing. ‘Brokeback’s’ bogus ‘outness’ stands in for and in the way of anything real. ‘Brokeback’ the ‘breakthrough’ movie depicts less credible warmth, intimacy and tenderness between the male lovers than a movie like say, ‘Butch Cassidy and the Sundance Kid’ – now nearly forty years old.

And rather less homoerotics than that other, ‘straight’, Gyllenhaal vehicle ‘Jarhead’, another film about lonely all-American boys sharing tents in the middle of nowhere, which, amongst other things, features a Marine gay gang bang in broad daylight – it’s simulated, but rather more convincingly, and joyously, than the sex in ‘Brokeback’.

Palpably ‘Brokeback’ is not the movie that people think or want to believe it is – but it is a movie which, in its vagueness, ellipsis and coyness, and even its hypocrisy, allows itself to be misrecognised as the modern explicitly male romance movie people clearly need it to be. Let’s hope that its success means that someone out there can now make a movie that is a little more convincing.

Or even just one in which men in love kiss with their mouths open.