The Cleanest Bodies & the Filthiest Minds

The skipper of the nuclear-powered carrier and Star Trek namesake the USS Enterprise seems to be in danger of being keelhauled for ‘raunchy’ on-board videos he made to entertain the crew back in 2007 when he was second in command. The videos included male-male and female-female pairs pretending to soap one another up in the showers. I’ll admit I haven’t been able to watch all the video, which is full of in-jokes and far too much Capt. Honors and not enough shocking footage for my liking, but according to the Virginian Pilot:

“The Marines I have seen around the world have the cleanest bodies, the filthiest minds, the highest morale, and the lowest morals of any group of animals I have ever seen. Thank God for the United States Marine Corps!”

No, that wasn’t my friend ‘military-chaser’ Steve Zeeland, but First Lady Eleanor Roosevelt.

I don’t rate Capt. Kirk’s — I mean, Owen Honors — chances of surviving this scandal since it catches him between the Scylla of American political correctness and the Charybdis of American Puritanism. ‘Inappropriate conduct’ being the magical phrase used to bring these two crushing forces together. These are straits from which few mariners return. Never mind that the videos were apparently very popular on board the USS Enterprise – and were never intended to be seen by anyone on land. This was another, relatively more benign kind of Don’t Ask Don’t Tell — but one that seems in this day and age just as doomed as the other.

As the sailor who made the videos for Capt. Honors put it:

‘”In his defense, I’ll say that sometimes, when you’ve been out to sea for a while, cut off from everything, you start to think things that you would never normally do are actually a good idea,” he said. “You do stupid stuff to stay sane.”‘

Or as the old Navy saying has it: It’s never queer unless you’re tied to the pier.  But these days, you’re always tied to the bloody pier.

‘…electronic communication with the rest of the world while at sea can be difficult; it was nearly impossible to e-mail or upload videos from the carrier in 2006 and 2007.

“He probably figured they’d never get off the ship.”‘

I originally viewed the video in the tiny format of the box on the Norfolk Pilot website. Seeing it on YouTube in larger resolution I now realise that all three characters you see sitting in Capt. Honor’s stateroom at the beginning of the vid are in fact Capt. Honors. That the second in command of the USS Enterprise saw fit to split his personality into a nerdy ‘gay’ SWO and a macho, cool air jock is ‘fascinating’, as Spock would put it. Or would be if I fancied Honors more. 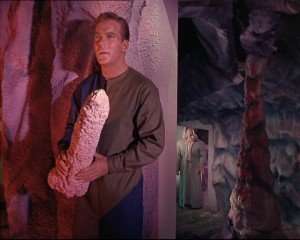 The Bizarre World of the Bisexual