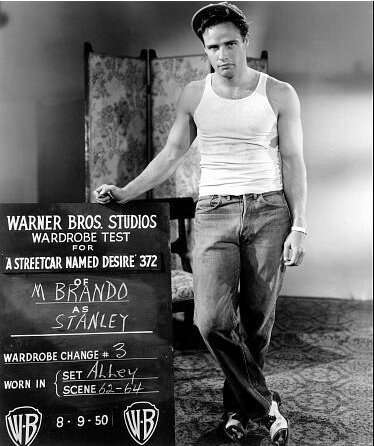 America’s hottest new Hollywood stars – who naturally enough in this post-Hollywood era, don’t actually work in Hollywood but reality TV – were recently honoured with a profile in Interview magazine. The Italian-American ‘Guidos’ from MTV mega-hit ‘Jersey Shore’, who have conquered America with their brazenness and their Gym Tan Laundry routine, were styled in Dolce & Gabbana. Suddenly, they looked as if they had come home. After all, these twenty-something earthy but flamboyant, self-assured but needy young men are, aesthetically, emotionally, the bastard offspring of Dolce & Gabbana.

The Italian designers Domenico Dolce and Stefano Gabbana got together over two decades ago to make beautiful, emotional clothes for men – but ended up, almost as an afterthought, siring a generation. Such has been the potency of Dolce & Gabbana’s worldview they have more or less patented the aestheticized modern male and his yearning desire to be desired. Their dreamy but virile vision of the male has become the dominant one in our mediated world. Even if Dolce & Gabbana man sometimes likes to be underneath.

But who or what is Dolce & Gabbana man? In ‘20 Years of Dolce & Gabbana’ a bumper book of vintage glossiness cataloguing the growth of the brand, the French actress Fanny Ardant describes him as ‘arrogant, with irony,’ which sounds very Jersey Shore. Victoria Beckham describes him as: ‘not afraid to be in tune with his feminine side and the sexual side of his persona…’ adding, ‘he has a strong sense of European fashion and has an extravagant, flamboyant sense of personal style.’ I think we know who she has in mind.

Aside from Becks (some, er, seminal 2002 images of him in half-undone jeans are included here) who is the quintessential Dolce & Gabbana man? ‘Cesare Borgia’, says Ardant, perhaps being slightly ironic herself. ‘My son Rocco,’ asserts Madonna, who probably isn’t. For my part I’d be tempted to name Cristiano Ronaldo, whose carefree personal style seems totally Dolce, even when he’s advertising Armani.

Actress Scarlett Johansson hits the bullseye when she identifies him as: ‘Marlon Brando in Streetcar Named Desire’. Yes! That white vest! That brooding brow! That pouting face on a Sicilian stevedore’s body! Truly “STEL-LA!”, young Brando was in many ways the first Hollywood male pin-up, arrogantly and flirtatiously inviting our gaze in a way that hadn’t really been seen before in America, even if it was nothing unusual on the streets of Syracuse, Sicily.

Brando doesn’t appear in the many film stills scattered through this book as examples of the inspiring lights of the brand, instead we have the pin-ups of Italian neo realist cinema such as Massimo Giretti and Renato Salvatore and of course, the sublimely refined Marcello Mastroanni. But Marlon and his vest – and even in his middle-aged Godfather role – are evoked by many of the fashion shoot images here.

As Tim Blanks puts it in his introduction: ‘There’s some irony in the fact that it was actually Hollywood which distilled Italy’s international image to handful of core ingredients that were really Sicilian in essence – the machismo, the mama, the Mafia, of course, and, all the time, bright sunlight, dark shadows, and overwrought emotion.’ Dolce & Gabbana were in effect an Italian take on Hollywood’s take on Italy. But all the more poignant for that.

Dolce & Gabbana are less of a fashion brand, more a studio system that produces pin-up-ness in the form of clothes. Or, as they like to put it themselves, ‘dream doctors’. The famously iconic pictures included here of a smouldering young Matt Dillon, and Keanu Reeves in his vealish prime, bring out and something Sicilian in them that Hollywood itself has long since forgotten how to do.