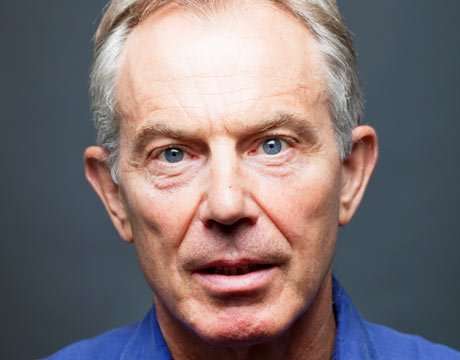 Why We Still Love The People’s Premiere

In that autobiography you may possibly have noticed former British PM Tony Blair is currently touting, the one called ‘A Journey’ (a title that masterfully captures the sublimely faux modesty of its subject), Blair compares himself to Princess Di.

‘“We were both, in our own way, manipulators” — good at grasping the feelings of others and instinctively playing on them.’

The papers of course have seized on the People’s Premier’s candidness, making headlines out of it.  That and his observation (conveyed in a kind of morse prose) that Gordon Brown had: “Political calculation, yes. Political feelings, no. Analytical intelligence, absolutely. Emotional intelligence, zero.”  And also his claim that he knew Gord’s premiership would likely be ‘a disaster.’

I agree with Tony.  Or rather, Tony agrees with moi.  Back in 2006, when Brown’s bizarre (and now conveniently forgotten) popularity with the media was rampant, just before his coronation as Labour Leader, I predicted, with Cassandrine accuracy, that Brown would be a disastrous leader of the Labour Party and that he had in fact already lost the next General Election.  I also compared Brown and Blair to Charles and Di, calling Brown an ‘operator’ and Blair a ‘great manipulator’.

Of course, it didn’t really take much insight to see all that coming, even if most of the media couldn’t at the time.  But in the piece I talked about how Blair’s ‘lying’ was what made him a much more successful, much more popular politician than Brown – who was very, very bad at it.  Which is not to say that Brown was a much more honest man – just that he wouldn’t and couldn’t perform for us.

‘Admitting he lied is not a mistake Blair is likely to ever make. Blair’s special talent, the thing that puts him ahead of most other politicians, certainly in British political history, is that he can convince himself his lies are literally the god’s honest truth, at least for as long as he’s telling us them. And – truth be told – in his mind, he never actually ‘lies’ to us at all. He’s an actor – an actor of the Stanlislavsky school: the emotion he shows us is ‘true’, it’s just usually attached to something that is not. This is why he’s such a great performer and politician – we appreciate and are flattered by the energy and the psychosis he puts into his performances. He is a great manipulator…’.

‘Brown on the other hand is a great operator. And operators, unlike manipulators, are painful to watch. They resent having to manipulate us and we resent having to watch them resenting having to manipulate us. Tony is Princess Di to Brown’s Prince Charles. Brown, who tells us he is ‘quite private’ and who prefers ‘substance over celebrity’ as if these were reasons why we should be interested in him, clearly wants power but he doesn’t really want to become the thing that power is in this mediated day and age: an actor. He won’t be forgiven for that by the electorate/audience.’

Brown’s desperate agreement to appear in those Election X Factor shows – in which David Cameron and Nick Clegg, both thespian heirs to Blair, shone with their ‘look, guys’ sincere insincerity – only threw his boring manse inflexibility into even more painful relief.  The electorate treated him with Cowellian disdain (the most damning thing of all was that those listening on the radio thought Brown had won the debates).

And even in the political afterlife the emotional gulf between Brown and Blair persists.  Blair of course is passionately hated, where Brown is merely despised. Or worse, pitied.

‘Doesn’t he look OLD?’ we spit, when Blair pops up in the papers or on telly, usually to tell us with those raised eyebrows how he doesn’t regret anything and didn’t fib about anything either, honestly guys.  ‘Hasn’t he aged BADLY?’ we gloat, pretending to be beyond his charms now.  But actually sounding just like a bitter ex trying to convince themselves that their former amore fell apart after the affair ended after he turned out to be sleeping with the au pair.

Truth is, Blair still has that Diana star quality – partly because he is still a great manipulator, but mostly because it’s so difficult to work out which side of the reason/unreason line he’s on these days.  You can’t but watch with rapt attention, trying to divine the content of his (Catholic) soul.