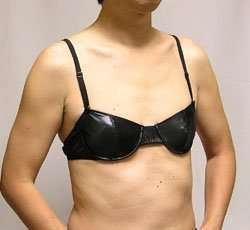 Apparently the male bras, unlike the female variety, have no practical function – not even to make men’s pecs look bigger or offer support to sagging ones – their value is entirely psychological.  Particularly for male office workers unwinding after a stressful day at the office:

“One customer said when he wears a bra he feels he can ‘reset’ his feelings. If something bad happens he puts on a bra and feels he can come back and fight another day,” he continued.

It’s almost as if Japanese men’s wearing of bras is the equivalent of feminists supposed burning of them in the 1970s.  Reportedly even America is waking up to the commercial potential of this undoubtedly brand new male product:

“We get a lot of inquiries from Americans who are interested in selling the bras,” Tsuchiya reported.

And why not?  After all, Madison Avenue is currently bombarding American males with very expensive propaganda to get them to use ‘girly’ Dove body wash and buff-puffs.

However, us Brits are less understanding.

“… the British are different — they tend to be shocked by what we’re doing.”

Well, we would.  We know that bras on men are just wrong.  Unless you’re standing on a stage in a badly fitting wig making off-colour jokes.

Male bras are still a niche within a niche even in Japan, but the fact that they exists at all does show that metrosexuality will stop at nothing in its appropriation of anything ‘feminine’ – in order to look or feel fabulous.

‘The world’s most perceptive writer about modern masculinity’