Rooney Plays With Himself Now Cristiano Isn’t Around

Who knew that Rooney on Rooney (in a romantically darkened stadium) could be so swooney?

The message of this latest spornographic ad seems to be that you play better with yourself with your shirt off.  Especially if you’re on YouTube.  And that Powerade InnerGear replaces those salts and ‘nutrients’ you lose in your body fluids.

But in all its autoerotic, chunky bear-cub pride this ad seems to also lovingly-longingly evoke a missing torso.  The smooth, defined, ab-tastic one belonging to Rooney’s much more talented, much prettier Portugese ‘winker’ chum – famously fined for peeling off his shirt on the pitch – who is no longer with Man U, or Rooney, but playing for Real Madrid and stripping off for Mr Armani. And also for visiting fully-clothed Formula 1 race car drivers.

Hence the recent statue of Cristiano Ronaldo unveiled by Nike in Madrid looks so hilariously unconvincing not so much because it doesn’t look anything like him – and it doesn’t even look unlike him – but because it’s wearing a shirt. 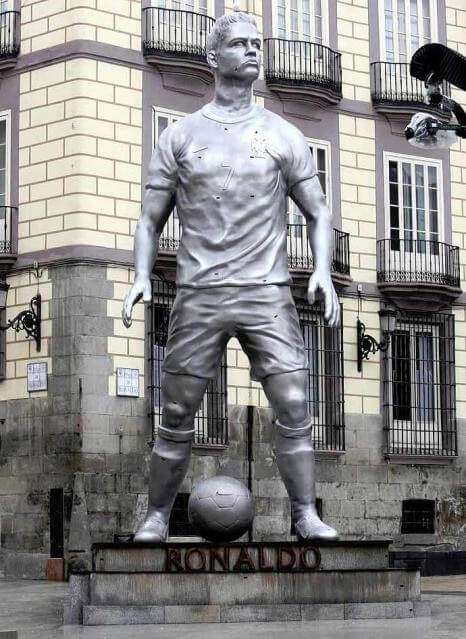