My congratulations go to Cristiano Ronaldo, who once again is stepping into Beck’s pricey shoes – and briefs. Ronaldo has just been named Armani’s new international ‘spokesmodel’. (Presumably his legs and packet are going to do all the talking.) 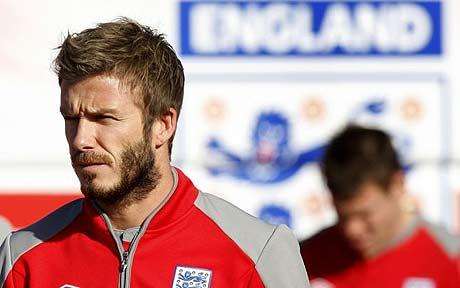 Poor Becks, Mr Armani’s previous sporno star, discarded by his Italian designer sugar daddy like yesterday’s trade, unpopular at Galaxy FC and currently sporting a Captain Birdseye beard, is increasingly looking like someone who was merely keeping that overpriced underwear warm for Ronaldo. In fact, being appointed Mr Armani’s international flasher — rather than the record-busting transfer deal to Real Madrid earlier this year — is the 100% cotton proof that Ronaldo has now finally and officially eclipsed Becks bulging profile in the metro-tarting stakes.

The crown of metrosexuality — and more importantly the pants — have been passed on to a new generation. Cristiano Ronaldo, ladies and gents, is the new metrosexual king/queen. (He may not have much taste, but that’s the wonderful thing about being king or queen: you don’t have to.)

Becks may have blazed a trail for footballing metrosexuality, but Ronaldo is looking like the finished, total product where Becks was merely the prototype. Ronaldo is genuinely, boyishly (and annoyingly) beautiful, where Becks, well into his thirties now, increasingly looks like mutton very expensively dressed as lamb.

I don’t think though that Becks will fade away any time soon. Despite all the talk about his his fetching looks, he never was a great beauty. No, really. It was the passion of his desire to be desired that was always the compelling thing about him — and as he gets older that passion will probably only increase.

Even with a Birdseye beard.