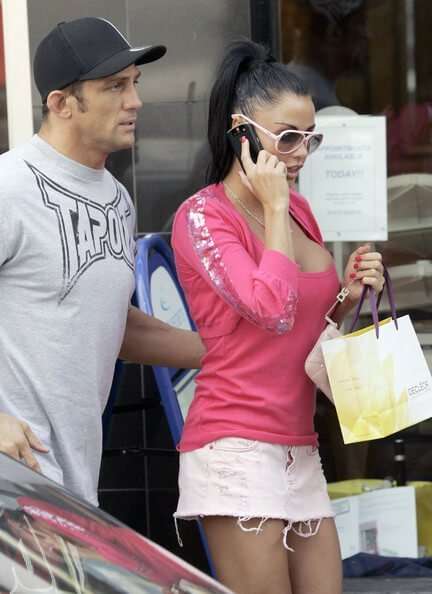 Yesterday’s Daily Star tells us, in a news item that seems to be full of invisible exclamation marks, that ‘The hunky cage-fighting lover of sexy Kate Price is a secret cross-dresser called Roxanne{!!!}.’

Muscleman Alex Reid, 34, has had the dual identity throughout his adult life.  As Roxanne he wears full make-up, women’s clothes, wigs and high heels and even alters his voice to make him sound like a woman{!!!}. He also snaps at anyone who calls him Alex while he is in his female character{!!!!!}.

Well, can you blame him?  If I went to all that trouble to model myself on a Sting single about a loose lady putting on the red light and people still called me boring old ‘Mark’, I’d be a bit sharp too.

Yes, it certainly has a sexy publicity angle to it….

She is so accepting of his Roxanne role that she bought him dozens of pairs of size 10 stilettos on a recent shopping trip{!!!}

Despite the relaxed attitudes of Price and family, there are quite a few dissappointed punters out there.  Many of them trannies.  It was Michelle, my male-to-female tranny friend and former male stripper called Stud-U-Like, forwarded me this story – in disgust.  Sometimes trannies have the greatest faith in masculinity, despite knowing its weaknesses very intimately.  But then, I suppose that’s what faith is.  And besides, it’s always a bitch when tranny-fuckers turn tranny.

I’m not much of a believer myself.  Not in these mediated, metrosexual days of male sluttery.  Besides, I don’t really mind strapping lads in basques who want to be high-heeled sluts.  I’m just not sure where I’m going to get the energy to deal with them all{!!!!}.

And regardless of whether or not ‘Roxanne’ really exists, for some time I’ve looked at those ubiquitous pictures of of Alex and Kate going shopping and thought: Your beefy new boyfriend is borrowing your bronzer and is even more aroused by large lenses than you.  In other words: it’s a perfect match.  For all that cage-fighting cabbage-eared muscleman shtick – which looked as hyper-real as Price’s boobs – he seemed even more like a MTM transexual than her previous partner Peter ‘Abs’ Andre (who of course is no longer a MTM, but a MTJW: male-to-jilted-wife).

Besides, it’s all so inevitable.  I wrote an essay for Out magazine last year, partly inspired by my friend Michelle’s transtastic journey from Stud-U-Like to Chick-U-Love, about how we’re all going transexy:

Looking around at our sexually transparent, stimulated-simulated, implanted-imploding, cam-fun-anyone? world, it’s difficult not to conclude that most of us are going tranny but without the, er, balls to actually change sex or even properly cross-dress. We’re all becoming male-to-male and female-to-female transsexuals: transexy.

Nice to know that at least one transexy male celeb has the balls to properly cross dress.  But I guess if you’re a cage fighter then people are more likely to remember to call you ‘Roxanne’.  And not laugh.  At least, not in front of you.

There’s Something About Henry