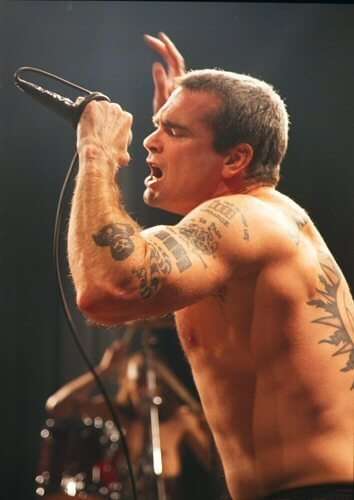 There’s Something About Henry

A friend has just drawn my attention to this teasing ‘Letter to David Beckham’ by Mr Rollins recorded a couple of years ago, warning Becks when he moves to LA to play for LA Galaxy he’s not going to be so special: the town is already full of ‘metrosexuals… with crunchy hair and distressed jeans and absolutely glowing skin’.  And warning him that he’s not going to sell soccer to American kids because they when they see a soccer game they think ‘soccer… gay!’

It’s funny, and perhaps given Beckham’s Stateside fortunes today also on the money. But the funniest part of it is perhaps not entirely intentional.  When Rollins talks about ‘us metrosexuals’ the gag, like the image of Henry primping his crew cut under a salon hairdryer, seems to be that no one could be less metro than thick-necked, bulldog-voiced, tattooed Henry.

But I’m not so sure. There’s something intensely narcissistic about Henry: it’s part of his star quality -- and his pumped, buzz-cut masculinity does look self-conscious and a little accessorised.  (And I should know about accessorising such things.)

What’s more, like many metros Henry’s sexuality has been the subject of rumours and innuendo for years, something which he has often complained about -- though he himself seems to be here making joshing innuendo about Beckham’s sexuality himself. Maybe the rumours are so persistent because he’s outspokenly pro-gay rights (only a gay could care about the gays so much, the ‘reasoning’ goes); because he’s middle-aged and unmarried, and quite a few gay -- and straight -- men fancy him. Or maybe it’s because he does look a bit ‘gay’ in that slightly cartoonish, slightly over-drawn, over-inked butch way.

For what it’s worth, I’m more than happy to accept that Henry the person isn’t homo, but Henry the persona does have a certain queerness about him that just won’t quit, which is an important part of what makes him intriguing to the public. This is what I was trying to get at, I think, in the brief interview below that Rollins gave me in his modest-sized hotel room one evening during the London leg of his 1998 Spoken Word Tour.

Henry Rollins is not gay. Okay? Can we get that straightened out right now?  The ex Black Flag front-man, stand-up comic, author, actor, weightlifter and leading exponent of penitentiary chic á la Robert De Niro in Cape Fear, may come across like the American Mishima, but he’s into chicks.  Though not that much.

‘There was this rumour going round,’ says Henry in his oddly articulate jock/jarhead/jeffstryker way. ‘Fucking MTV called me up and asked me if I’d like to come out on some show of theirs. ‘So I’m gay, huh? I think I’d remember some guy fucking me up the ass!’ The thing that bummed me out about it is that when you have the ‘he’s gay’ fiction spread around the media about you it’s only to slander you. Everyone is like, ‘That guy, he’s a fucking fag!’. But for me being gay is just such a non event. You are into what you’re into. End of story.’

Why do you suppose people think you’re homo?

I asked my gay friends why people thought I was gay, and they said, ‘You’re 37 and in shape. You are thoroughly focused. You have a great ass.’

Maybe the rumours have something to do with the fact that you don’t have a girlfriend?

Well, yeah. That’s possible. I don’t want a girlfriend because I don’t want to have to call someone every day. The only thing I miss on tour is my bar. I got a precision engineered York power-lifting bar; I miss that fucker because it feels so good! I’ve had enough girls in my time, but I’ve slowed up lately. I’d rather jack off than get into something shallow. But I think the problem is that I don’t make a song and dance about the women I do fuck. I don’t go out on the town with them on my arm. I go to the bookstore.

On the other hand, you are ‘gay’ in the sense that you’ve built yourself your own masculinity.

Is that a gay thing?

Not specifically. But characteristically.

Yeah, you do get some gay guys who are like hyper-masculine. Look at that guy in leather! Hell, that’s two guys in one man! He’s really getting his point across. When I was in high school I was very skinny. It was a Vietnam Vet that got me into weightlifting. It was the first time in my life when I achieved something: I put on 15 pounds of muscle mass. In life you’ve got to have a bit of the ‘Come on motherfuckers! I got something for your ass!’ mentality.

Tell me about it. Do you get offers from men?

Oh yeah. Sure. All the time. And I go, ‘Well, that’s cool, but I’m not from that bolt of cloth,’ and they go ‘Really? I thought you were.’ And I go, no, no I wouldn’t kid you about that. ‘Are you sure?’ ‘Yeah.’ ‘Not even maybe just this once?’ ‘Nah, really I don’t want to go there.’ One guy hit me with a really great proposition. He said, ‘Well, close your eyes and you really can’t tell the difference. And I’d do it a lot better than any chick you’ve been with.’ ‘Well, since you’ve got a cock I bet you would.’ But you know, it’s just not my scene.

Your look, the tattoos—have you done time?

I don’t know man. You’re looking at me about eight pounds underweight, usually I’m 200, but I can’t get the lifts because I’m touring so much, I think that kind of keeps me out of little bitch mode, I’m not anybody’s idea of a piece of chicken, and as far as fighting goes, I know a little bit about that. But in prison, I’d probably be fucking terrified man.

But hasn’t your whole life been a kind of preparation for prison? No family life, no time off—all that lifting weights…

Well, other people tell me where to go because I want to go there, I let them structure it for me. But yeah, I see what you’re saying. I went to a military school for seven years and that had a big impact on me. My dad was also ex-military. My Dad would say stuff like, ‘Fall-out for McDonald’s. Fall-out for your fucking Happy Meal. Shit like that gets to you after a while.

A shrink would say that you have a very punishing super-ego.

What I mean is, it sounds as if a part of you is always watching over yourself, policing you --always demanding better.

Oh, that’s true. A lot of my work is result orientated. I’m always trying to do a better show, a better CD, a better book. I have to grade myself nightly. I come off the stage and I often kick myself….

I’ve heard that you were recently ‘watched over’ by someone else.

Oh yeah well, {acting out the scene very loudly} this guy is standing next to me just staring at my dick, and I’m thinking, this is cool, I can deal with this, and my bladder’s fucking bursting but I can’t go, man! I said to myself, Watch me take a leak with this guy watching me and me not give a fuck. But this guy totally took me. He won. Maybe he was some kind of urine comptroller. Fucking crazy shit, man.