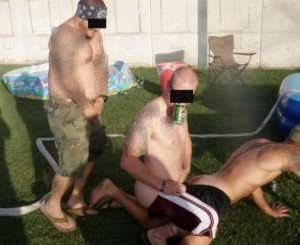 A column of mine on Out.com, ‘Men At Play in Afgrabistan’, gallantly defends the freedom of the derided (and now dismissed) security guards at the US embassy to get naked with one another and eat potato chips from each other’s butts in their spare time – even if they’re out of shape.

I also point out how everyday and ‘normal’ homoerotics is for many if not most men – but we don’t want to see it, and when we can’t ignore it because it’s thrust in our face by digital cameras and the Interweb we pathologize or criminalize it:

…the furor is another reminder that we live in a culture where female bi-curiousness is routinely regarded as natural and almost universal while male bi-curiousness is seen as non-existent – or else it is just “sexually confused” (i.e. they’re really gay, but laughably repressed), or it is “deviant hazing” conducted by “sexual predators” that needs to be eradicated.

In reality, to anyone who opens their eyes on a Saturday night on either side of the Atlantic, there’s scads of evidence that plenty of “normal” young men who aren’t particularly “sexually confused” – especially the most, er, physical types – have a healthy appetite for highly homoerotic behavior after a keg or two. It’s what beer seems to have been invented for. In the Middle Ages they thought the cause of sodomy was drunkenness – they weren’t wrong. By contrast, I’ve hardly ever seen such homoerotic horseplay amongst straight women, even despite the invention of alcopops (though admittedly I perhaps wasn’t looking as closely.)

Some people have a more violently negative response to the everyday evidence of male homoerotics, literally trying to stamp it out.  In the UK a straight female Canadian martial arts expert attacked and knocked out a couple of drunken British soldiers at a disco for kissing and ‘pretending to be gay’, screaming ‘THIS SHOULD NOT BE ALLOWED IN THE BRITISH ARMY!!’.

Living in a garrison town I’ve seen plenty of similarly steamy behaviour from drunken squaddies in pubs and on dance-floors, snogging and humping and groping one another, so I can understand her frustration – I’ve wanted to get physical too, but not in quite the same way she did.

Sometimes the response is more genteel, but just as vehement.  During the last Rugby World Cup a couple of years ago I was invited on Woman’s Hour on BBC Radio Four to talk about homoerotics and rugby.  I thought it a bit odd that Woman’s Hour wanted to cover this subject, but the producer enthused: “The presenter Jane is really keen to talk about it”.  It turned out that neither the presenter, a former female sports journalist, or her guest, another female sports journalist, wanted to talk about it at all.

Both of them refused point blank to countenance the possibility that a game that involves men with large thighs wrestling in the mud over odd-shaped balls, or taking communal baths, or kinky nude drinking games that would shock the guards at the American Embassy in Afghanistan, could be in any way homoerotic.  Only a homo would say such a thing.

“Of course you would say that Mark,” she said at one point, “because you’re gay”.

I paused.  Several things occurred to me to say to that.  I could have replied that droves of gay men were probably rushing at that very moment to dissociate themselves from what I was saying (they usually do).  Or “Well, of course you would say that Jane, as an uptight middle class woman.”

Just a few weeks earlier this doc had gone out on national UK TV, in which a team of northern rugby players were shown getting drunk and naked with one another, snogging, licking each other’s nipples – and playing with their captain’s ‘donkey dick’. Of course, I couldn’t even mention it, because on radio – especially Radio Four. You’re not allowed to acknowledge that TV exists.

Again, being radio, and posh radio at that, just before we went on air a nice voice whispered in my headphone. “Remember Mark, this is a family show so please try not to be too rude!”  This did hamper my case somewhat, as rugby homoerotics are meant to be rude. Though it didn’t stop me from leaving something unsavoury hanging in the air: “The soggy biscuit game, for example, isn’t entirely a myth….”

“I think we’d better move on,” said Jane rather quickly.

Apparently the BBC switchboard was jammed with retired lady callers demanding to know what the soggy biscuit game was.

(This feature of mine from a couple of years back, ‘Assume the position’, offers a more in-depth investigation of the culture’s crackdown on hazing and male horseplay in general.)