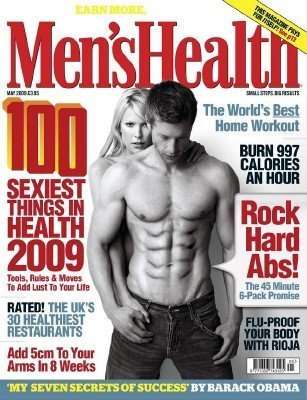 Men’s Health, the metromag with the pec-fest, ab-tastic covers is now the best-selling men’s magazine in the UK, selling more than 250,000, compared to 235,000 for previous best-seller so-called ‘lad mag’ FHM with its famous cover babes sporting udders almost as big as those of Men’s Health models.

The truth is of course is that FHM is as much a metromag as Men’s Health (or ‘Men’s Hypochondria’ as I like to call it). It just used the ‘lad mag’ tits-and-booze formula as a beard for its metrosexuality. When it was attacked by female journalists for being ‘sexist’ FHM’s publishers secretly cheered because this meant that these mass-circulation magazines peddling male vanity, fashion and self-consciousness might be mistaken for something traditional.

The real money shot in FHM — and the reason for its very existence — was never the ‘High Street Honey’ spreads but rather the pages and pages of glossy ‘high-value’ ads featuring pretty male models in various states of designer undress.

But fifteen years on from the launch of the first ‘lad mag’ – and also fifteen years on from my first use of the word ‘metrosexual’ in an article for the Independent which predicted that male vanity was ‘the most promising market of the decade‘ – the moisturised future has arrived.  A generation of young men have grown up with metrosexuality, see it as ‘normal’ – and don’t need the hysterical heterosexuality of lad mags.

In a sense, lads mags have done what they were invented to do: metrosexualize men on the sly.  So they aren’t really needed any more.  And arguably, post YouTube/iPhone, magazines in general aren’t needed any more either.

But no revolution is ever complete.  And everything is relative. Precisely because everyone knows what it is, Men’s Health are still trying convince you that none of their readers are gay or bisexual — or even metrosexual.  Instead the deputy editor reassures The London Times all their readers ‘have kids or want to have kids’, and and are ‘heteropolitan’ — an uptight marketing inversion of the word ‘metrosexual’, with HETERO in place of anything ambiguous and with that dangerous ‘sexual’ part surgically removed.

As I noted a couple of years ago in a piece lampooning their prissy denial, I suspect that most of even their straight  readers (and most of their readers are probably straight – just not very narrow) are way ahead of them. But then, marketing tends to be instinctively dishonest even if there’s no particular reason to be any more.

Whatever, I think it will be a while before male homoerotics and steroids, those unspoken staples of every single issue of Mens Health, get a strapline on the cover — even if female-on-male strap-on sex apparently already has (see the cover picture at top).

By the way, a similar trend has emerged in Australia, with MH also outselling FHM down under.  This recent piece in The Age, complete with rather amusing mock-up of what a men’s mag might look like in the not-too-distant future (which I thought for a moment was an publication currently available), provides a rather better analysis of what’s going on than much of what appeared in the UK press.

Shame then that The Age, along with its sister publication The Sydney Morning Herald, ‘borrowed heavily’ from — or in Australian: plagiarised — my 2002 Salon essay ‘Meet the metrosexual’  for a feature it ran in 2003 called ‘The rise of the metrosexual’ — with no mention of me or my Salon essay they thieved from.  I’ve yet to receive an apology.

I suspect I’ll get a column in Men’s Health before I do.