The Gay Case Against Gay Marriage and Gay Bigotry 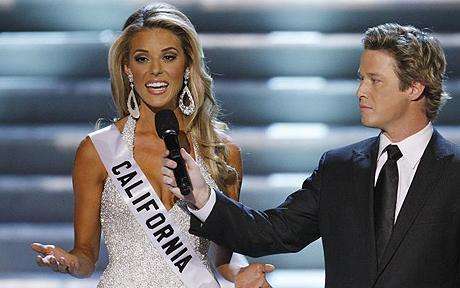 Who would have guessed the dainty opinions of a Miss America candidate would have been taken so seriously by gays and liberals?

Miss California, a practising Christian, was last week denounced by Miss America judge Perez Hilton on his blog as ‘a dumb bitch’ and unworthy of the Miss America crown because she gave the ‘wrong’ answer to his chippy question about gay marriage. Like most Americans – including the current Democratic President of the United States – she believes that marriage is ‘between a man and a woman’. Boo! Hiss! Rip her to shreds!

It wasn’t just the famously bitchy gay gossip-monger Hilton casting stones, however. For honestly and somewhat courageously answering his question Miss California was roundly condemned as a ‘bigot’ by hosts of gay and liberal bloggers, and was even denounced by the directors of the Miss California pageant who declared themselves ‘saddened’ by her views and that they had no place in the ‘Miss California family’, whatever that is. Most now agree with Hilton’s gloating claim that her answer cost her the crown.

Candidate Obama expressed the exact same view during the Presidential Election: “I believe that marriage is the union between a man and a woman. Now, for me as a Christian, it’s also a sacred union. You know, God’s in the mix.” Instead of being scorned as a bigot and a dumb bitch, Obama was handed the Mr America crown by liberals and probably most gay voters. But I suppose that being President of the United States is a rather less important title than Miss America.

Branding Christians and traditionalists ‘bigots’ for being Christians and traditionalists and thus none too keen to fundamentally revise the definition of marriage is a highly unattractive exercise in liberal self-righteousness that makes Miss America look quite sophisticated. Not to mention sounding a lot like pots and kettles rattling. It’s faintly absurd to have to even say this, but it isn’t bigoted to believe that marriage is between a man and a woman. It’s just being conventional. And after all, marriage itself is convention and tradition tied up in a big red bow and covered in confetti and sprinkled with Holy Water. Which is exactly why lesbians and gays should have nothing to do with it.

Today’s out and proud same-sex relationships are very unconventional and a very new kind of phenomenon. And so are in fact many of today’s cross-sex relationships in a brave new world of gender parity. Marriage on the other hand is an antiquated, failing institution based on inequality and traditional roles. Much like Miss America.

Marriage is, whether you like it or not, also based on religious sentiment: ‘God’s in the mix.’ Especially in a very religious country like America. And I have a hunch, based on millennia of violent opposition to sex that doesn’t produce more Christians, that God is not going to sanctify ‘sodomy’ any time soon.

New ways of living and loving require new institutions. Or in the words of the famously unmarried Galilee carpenter and fisher of men: put new wine into new wineskins. And keep the flippin’ Pharisees out of it. Or else you’ll end up with a tacky mess.

It needs to be said out loud that full civil unions with the same legal rights and privileges of marriage at both the State and Federal level, supported by President Obama and many Republicans and even some right-wing evangelicals – and the large majority of American voters – are not only much more politically achievable in the US than gay marriage, they are also a better fit for most same sex relationships. What’s more they represent an entirely dignified way of side-stepping this endless, unsightly domestic between liberal and conservative, secular and religious, metropolitan and rural America.

But instead, gay marriage zealots, many of whom admit that they themselves don’t wish to get married, insist on characterising civil unions as ‘second class’, ‘social apartheid’ or ‘riding at the back of the bus’. I’d like to think it was merely a ploy to make fully-recognised civil unions more achievable, but many really seem to believe their own shrill propaganda. Worse, they’ve made even more of a fetish of the word ‘marriage’ than the religious right they rail against.

In the UK, where nationally recognised same-sex civil unions with the same legal status as marriage – called civil partnerships – were introduced in 2004 there is little or no appetite now for gay marriage. In my experience few lesbians or gays feel they are ‘riding at the back of the bus’. Maybe because in many ways they’re actually riding at the front. It’s probably only a matter of time before gay civil partnerships in the UK are made available to all, as they are in France – where the vast majority of applications are now made by cross-sex couples disenchanted with traditional marriage.

What’s more, fully-recognised, open-to-all civil unions are a fully-fledged secular institution that helps to shore up a fragile secular society. And make no mistake, it is secularism on which most of the – historically very, very recent – freedoms enjoyed by lesbians and gays are based, along with those of women.

But so far the gay marriage crusade in the US doesn’t seem very interested in any of this or lessons it might learn from the experience of other countries. Instead it seems too busy proving itself holier-than-thou. And less sophisticated than Miss America contestants.