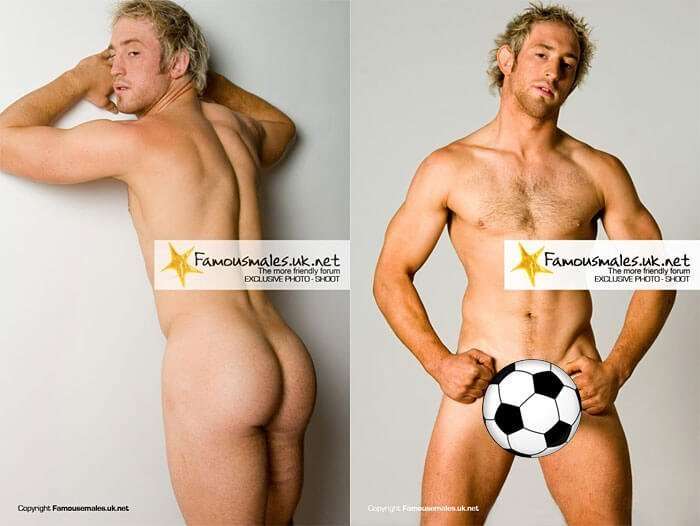 I seem to have somehow missed the not entirely shocking news that Tim ‘No Acorn’ Oakes of Sandbach RUFC, the spunky rugger-bugger captain who was so keen to show off his impressive semi-tackle on national television – and very kindly let his team mates play with it – has since gone the whole hog and stripped off for FamousMales.com, teasing the gayers with his no longer semi but fully erect assets.

EthanSays.com has some safely doctored snaps from the FamousMales shoot (albeit with the wrong kind of ball  – please try to remember you Yanks: rugby players’ balls are odd-shaped). Here’s how the shoot went according to Ethan:

Completely at ease with being naked, Tim recently stripped down for Famous Males and stood stark naked in front of them, his proud, strong nude form – beautiful and stunning. “I’ve got quite a few scars now,” Tim said. “I get well bashed about on the field. God knows what the lads will think of this when they see the pictures…hee…hee.” “JUST LET ME KNOW WHEN YOU WANT ME HARD.”

I’ve seen the pics sans strategically placed football and let’s just say Tim is not only a shower, he’s also something of a grower.  That said, I personally happen to think his ‘hammer’ is even more fetching than his ‘nail’.

His face isn’t bad either….

(Shame about the haircut, though.)

Male Bisexuality: Is it Cool?