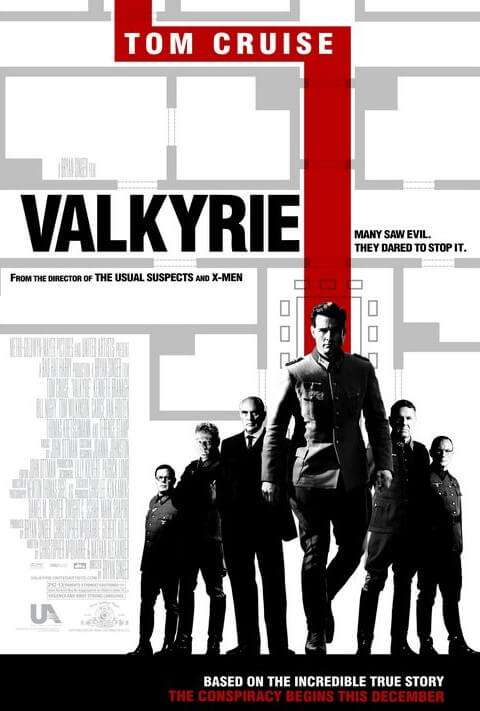 Your mission, should you choose to accept it, is to blow up the Twentieth Century’s most infamous evil genius in his heavily fortified bunker in the East, escape alive and then fly back to Berlin where you will lead a coup, negotiate an armistice with the Allies and save Germany from total destruction and eternal ignominy. Oh, and also save your own reputation which has recently sunk to near Hitlerite levels.

This plot will self-destruct in five seconds….

I finally got around to seeing Missy Impossible IV the other night, the one directed by Bryan Singer with the art-house name: Valkyrie. Although it has by far the most improbable plot – because of course it’s based on real events – and this mission is, we all know (at least those of us who are not American High School students) destined to spectacular failure, for me this is probably the most watchable product of Tom Cruise’s James Bond knock-off Mission Impossible vehicle. And I’m someone who always finds Mr Cruise watchable – even if I like to say unpleasant things about him.

Of course, Valkyrie is not officially part of the MI franchise, but in terms of the way it presents itself it doesn’t pretend too hard not to be. The credits tell us that Tom Cruise is cast as Claus Schenk Graf von Stauffenberg, the leader of the abortive 1944 July Bomb Plot against Hitler, but Mr Cruise is bigger than Hitler, let alone some German aristo officer who tried and failed to knock him off. Hence Claus von Stauffenberg is mostly just another, mid-Twentieth century, Prussian look for Mr Cruise’s morality-in-action-hero persona, while the twilight of the Nazi regime and the last desperate attempt by Germans to overthrow their crazy Fuhrer is just another exotic cinematic backdrop for his photogenic looks.

The poster for the film also looks like it’s advertising the latest MI (Mr Cruise leading his ‘team’ into the villain’s lair). Even the theme music is the same. In the film Mr Cruise names the secret coup plot ‘Valkyrie’ after listening to the thrilling, high-energy string intro to Wagner’s ‘Ride of the Valkyries’ – which sounds remarkably similar to the opening of the MI theme tune.

But Tom Cruise vanity vehicle or no, Valkyrie throws up some interesting themes. It opens by showing us on screen the text of the personal oath that all members of the Wehrmacht had to swear to Adolf Hitler from 1934 onwards:

‘I swear by God this sacred oath that I shall render unconditional obedience to Adolf Hitler, the Führer of the German Reich and people, supreme commander of the armed forces, and that I shall at all times be ready, as a brave soldier, to give my life for this oath.’

The oath, which of course the July Bomb plotters were all flagrantly breaking, was one of the favourite reasons often given by German soldiers after the war was lost as to why they continued fighting to the bitter end. Regardless, it was certainly one of the reasons why the plotters had to kill Hitler – and the main reason why their failure doomed them.

The movie is built on the premise that the ‘brave soldiers’ are the ones who tried to kill the Fuhrer, knowing that, as Eddie Izzard (perhaps playing a bargain-basement Philip Hoffman playing a German staff officer) puts it to Mr Cruise in a men’s room: ‘the SS will pull you apart like warm bread’. We spend much of the movie looking forwards to this climax, but alas, in the final reel, Cruise manages to get himself shot before the SS arrive.

Odd to think though that what essentially was a ‘til-death-do-us part’ marriage vow that every German soldier had to make to Hitler came about largely as a result of the murder of homosexual SA leader Ernst Rohm and much of the rest of SA leadership during the Night of the Long Knives in 1934, the first extra-judicial killings by the Nazi regime, justified shrilly by Goebbels – who of all the Nazi leadership was genuinely, passionately,  devoted to Hitler – railing about the ‘degeneracy’ of the SA leadership and claiming, falsely, that they were planning a coup. (Rohm, much more socially radical than Hitler, did though want the SA to replace the Wehrmacht – in part because he saw it as being run by counter-revolutionary aristocrats like Stauffenberg. The Wehrmacht was so grateful to Hitler for backing them and eliminating Rohm they were happy to pledge alleigance to him after President Hindenburg’s death the following year, effectively making Hitler dictator.)

But then, Valkyrie is a heavily homosocial movie with some distinctly homoerotic overtones: almost everyone in it apart from a couple of telephone operators and Stauffenberg’s long-distance wife, is male and the romantic interest in the movie is provided by the spectacularly cute and devoted young blond male aide de camps resplendent in tailored Hugo Boss uniforms that all the generals have tagging along, including Mr Cruise (his lad played by Brit Northerner Jamie Parker ). In the opening scene of the movie, Cruise is badly wounded in North Africa trying to save a young soldier; at the end Parker voluntarily puts himself between the firing squad and Mr Cruise – facing him in death. And also meaning that Cruise sees Parker’s handsome face instead of the muzzles of the firing squad. This, the film seems to suggest, is the right kind of male soldierly devotion. Devotion to ugly evil old Hitler the wrong kind.

Even more than most Hollywood films Valkyrie is extremely fetishistic, openly revelling in the ‘sexiness’ of German Second World War uniforms (thanks to Hugo Boss, everyone in Second World War re-enactment societies wants to be the Germans). Perhaps this is because the subject here for once is ‘good’ Germans. ‘Real life’ though can be even more absurd than Hollywood: the actual Stauffenberg decided to assassinate Hitler himself after a previous assassin lost his nerve during an inspection by Hitler of… new uniforms.

The key assassination attempt scene at the Wolf’s Lair is uniform-related in the movie: in order to get some privacy to arm his briefcase bomb, Cruise asks one of Hitler’s flunkeys ‘Do you have anywhere I can change?’ showing a tiny shaving cut bloodstain on his crisp starched white shirt-collar (we saw him deliberately nicking his neck earlier). All in all, you can’t help but think it a terrible shame that the Red Army was going to arrive at Berlin the following year and get everyone’s uniforms very dirty indeed.

Most of the other lead actors in Valkyrie are British. Perhaps to lend a sense of Old World classiness to the proceedings that Mr Cruise, as an all-American, clean cut, apple-pie, autoerotic action hero isn’t able to – shouldn’t do . Or perhaps because they’re cheap. Whatever they cost, their faces lend character and credibility, and perhaps even a little Shakespearean gravitas (though perhaps not Eddie Izzard). Tom Wilkinson puts in a particularly seasoned performance as General Fromm, whose opportunistic vacillation helped seal the coup’s fate (he also played a corrupt East End Godfather in Guy Ritchie’s latest homosocial and even-more-bumming-obsessed-than-usual gangster movie Rocknrolla.) But Mr Cruise looks strangely out of place amidst all this – less like the altruistic Prussian officer than one of the British luvvies’ American male escort. 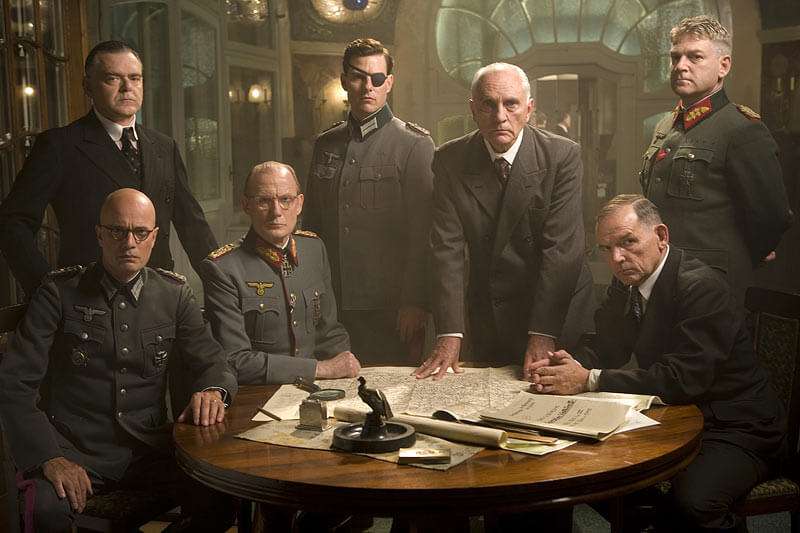 Valkyrie manages to play a little with Mr Cruise’s own celebrity and global narcissism (which today’s audience of course identifies with). It places much emphasis on Stauffenberg’s missing right hand, two fingers on his left hand and his left eye in North Africa, almost presenting this as the reason for his joining the resistance. Stauffenberg was a born warrior from a long line of warriors so he probably was less concerned with his wounds than we are: this motif only really resonates because it’s Tom Cruise, the most famous and recognisable actor in the world, one of the most officially desirable men in the world, whose entire film career from Risky Business onwards has been based on his heroic determination to see himself as a sex-object — and make you see it too.

The frequent close-ups on Cruise’s eye-patch and glass eye which he keeps in a silver box also seem to reference Minority Report, where he goes through an agonising eye-swap process so he can escape arrest. Apparently, Mr Cruise was attracted to the role of Stauffenberg because of what he saw as the resemblance of his profile to that of the warrior aristocrat.

In fact, any similarities there are between the two men’s profiles only throws into greater relief the dissmilarities – both in terms of their appearances and their character. At 46, Cruise often looks younger than 37-year-old Stauffenberg did in 1944 because looking forever boyish is Cruise’s job – it certainly wasn’t Stauffenberg’s. Most obviously of all, the difference between their profiles is that Mr Cruise is demotic, whereas Stauffenberg is aristocratic. Put another way, Mr Cruise has a much bigger schnozzle. 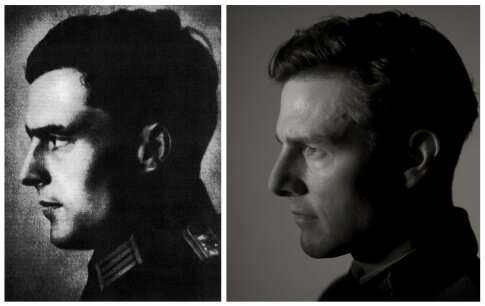 I do have one major complaint about the film, however. One of the greatest comedy moments of the Twentieth Century is missing. A scene sadly uncaptured on film at the time which would in itself almost justify making this movie (though probably not the mass execution of the plotters and much of the non-Communist German resistance). While he himself was left largely unscathed by the attempt on his life by Stauffenberg, Herr Hitler’s apparel was less fortunate. The bomb blew off the Fuhrer’s trousers leaving him unceremoniously debagged. 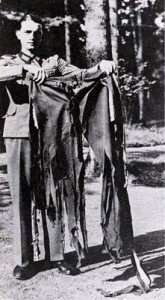 Now that Risky Business, with its career-making dancing-in-your-underwear-on-the-sofa scene is over a quarter of a century old, I bet Mr Cruise wishes that he could achieve that effect more often.

Thanks to Pedro for insisting I watch this film.