There’s a naked man standing laughing in your dreams.
You know who it is, but you don’t like what it means.

A number of people have forwarded Morrissey’s pubes to me. (For which, many thanks.)

I thought I could get away with not discussing the Moz minge, but this Red Hot Chili Peppers pastiche, nostalgic vinyl taking the place of stuffed socks, which appears on the inside sleeve of Morrissey’s new single ‘Throwing My Arms Around Paris’ has generated a lot of commentary, some amused, some not, and some, such as Paul Flynn in the Guardian, citing it as ‘the latest sign of artistic decline’.

But all of it suggesting Morrissey’s curlies cannot be ignored.

It’s funny how Morrissey manages to repeatedly surprise people with his consistent, insistent coquettishness. Only last year, legions were scandalized when that picture taken in the early 90s of His Mozness’ naked hairy arse with ‘YOUR ARSE AN’ ALL’ scrawled across it in Magic Marker  (with the apostrophe in ‘AN’ ALL’ aimed at Moz’s fundament) appeared in a booklet for his Greatest Hits collection: ‘So gross! This must mean he’s, like, totally gay!’ 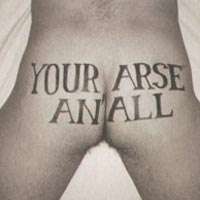 But Morrissey, odd, reclusive creature that he is, has never exactly been a shrinking violet. His work has always had a naughty, ‘cheeky’, exhibitionist side. As he sang back in the day on the Meat is Murder track ‘Nowhere Fast’: ‘I’d like to drop my trousers to the Queen – every sensible child will know what this means’. His first single featured a close-up of naked male gay porn star’s bubble-butt. His first album had a shot of the torso of a naked male hustler on it. (Like all the artwork during his Smiths period, it was all selected and directed and probably even pasted up by him.) 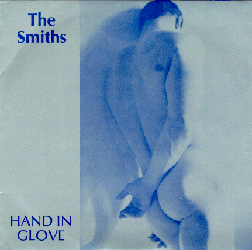 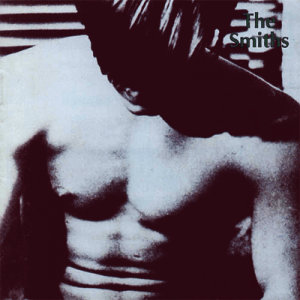 After The Smiths split, he became his own cover star and was to be found hugging his topless solo self on his 1997 ‘Best Of’ collection. 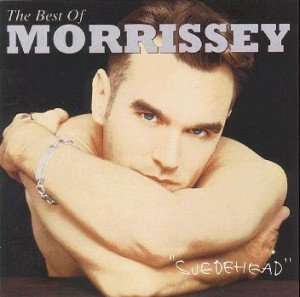 And while he may have once scorned her shamelessness, Moz’s outrageous ‘November Spawned a Monster’ promo in 1990 out-Madonna-ed Madonna, featuring him writhing in the desert in a skimpy see-through mesh blouse that somehow keeps slipping off – perhaps because he appears to be being bummed by an odd-shaped boulder.

On-stage he pole-dances around his songs often ending on his back with his legs in the air, obligingly lifted towards the auditorium, while yodelling. Even today, it’s still an absolute and legal requirement of all tickets sales that Moz strips off his sweat-soaked shirt at least once every show and throw it into the crowd, who instantly rend it to tiny fragrant shreds, which they then appear to eat.

If Morrissey doesn’t get his tits out for the lads and lasses you’re entitled to a full refund, I believe. It’s always been a flagrantly, probably pathologically sexual thing between Moz and his fans. Though as he’s got older and thicker around the midriff the pole-dancing does get a bit more, er, awkward.

Oh, and the naked Moz showing us his shaved armpit shot by Eamonn McCabe (which seems to be an update of the famous Narcissus statue by Cellini) used on the jacket of Saint Morrissey – partly to undermine the title – originally appeared on the cover of the NME in 1988 and on a big, fold-out, blue-tac-to-your-sweaty-teen-boy-bedroom-wall poster inside. 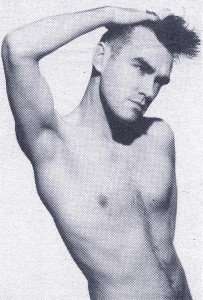 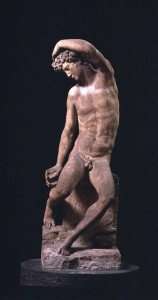 Today’s naked Moz looks very different. Which is only natural since he’s now nearly 50 – though of course ageing naturally is the height of unnaturalness these days. But the boyish exhibitionism is largely unchanged. Yes, he has the body of a middle-aged male celebrity who scandalously refuses to hire a personal fitness trainer (even if one or two of the chaps in his employ look as if they’d rather be on a ten mile run).

But he’s also showing us that inside the body of a pub landlord from County Mayo is still a skinny lonely boy from Stretford, nakedly demanding our love. With a seven inch pop single where his manhood should be. That’s how people don’t grow up.

If you look closely – and clearly I have – this jokey pic isn’t really very funny. Like ‘Throwing My Arms Around Paris’, it’s sadly, proudly defiant. It’s Morrissey’s family portrait. This is what his love-life looks like. It’s all here: Pop music. His band-mates. His fans (we’re looking at him again – he’s that naked man laughing and crying in our dreams).

And, centre of shot, perhaps his most enduring relationship of all: the one he has with his hair.