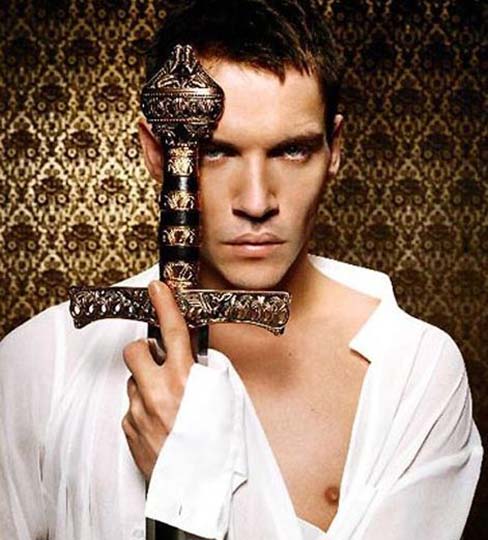 A Right Royal Rent Boy – The Tartiness of The Tudors

The makers of BBC2’s The Tudors, know which side their Irish buns are buttered. They recently announced that Jonathan Rhys-Meyer’s Henry will not be allowed to get fat in the third series, currently in production.

In case anyone’s interested, the actual, historical Henry VIII became a big porker in later life and needed a crane to hoist him on to his poor horse. Quite rightly, the makers of The Tudors, now half-way through its second saucy series, have decided that Henry’s historical obesity is a little bit too proley for BBC 2. “We still want him to be appealing,” explained Morgan O’Sullivan, an executive producer. “We don’t want to destroy his good looks. An exact portrayal of Henry is not a factor that we think is important.”

No, what is important today is that HD Henry be shaggable. In TV’s TudorWorld, no king can expect to hold the loyalty of his subjects if he doesn’t look like he would serve them faithfully in the bedroom. In other words, TudorWorld is a lot like the one we live in. As Rhys-Meyers put it himself, actors ‘don’t get famous for being pug ugly, do they?’

They certainly don’t.  And I certainly don’t tune in to ‘The Tudors’ for the dodgy history, or the campy script (Henry to Thomas More, author of Utopia: ‘Your ideas are a bit… Utopian’). Nor, frankly, for Rhys-Meyer’s acting – though admittedly there is some enjoyment to be had in watching the wife-axing Pope-baiting founder of the Royal Navy and in fact England as we understand her today played as a young Captain Kirk with anger management issues.

No, the only thing I really want to see him do with his pouty face with that Billy Idol perma-sneer is snog. Oh, and spasm during those orgasmic close-ups. Which is fortunate, because both these things happen about every three minutes.

Maybe the Tudor thermostats were set too high, or maybe it’s those leather pants, but even when he’s not snogging or coming, he seems to be allergic to shirts. On the rare occasion he has to wear one he seems unable to button it up. Which is probably just as well, as the naughty lad would only stain it.

Yes, there are lots of comely, busty ladies in TudorWorld and their bodices keep ripping, and Jonathan keeps shtupping them. But the fact that they’re usually rather better actors than him just underlines the fact that HD Henry is the real sex-object in his sex scenes, whichever wench he’s deflowering. His tits and ass are always the first out and the last in, and the widescreen camera makes sure his body is always, very vulgarly, on display. In fact, Rhys Meyers’ looks more rent boy than royalty.  Maybe that’s why his King of England speaks – on the rare occasions when he doesn’t have his mouth full of wench – like an escort ordering in a posh restaurant. (Which he is – it’s called BBC2.)

And while the occasional plain woman appears to be tolerated in TudorWorld, plain men who don’t happen to be smelly old Chancellors or Cardinals most definitely aren’t – and even they usually end up in The Tower. Even the ancient Holy Father, played by a surprisingly-still-alive Peter O’Toole, appears to have had more bad plastic surgery than Joan Rivers.

Unlike the bigger-budget, better-directed and scripted Rome, which in its Imperious second series almost succeeded in convincing you that its very trashiness and tartiness was probably the truest, most accurate thing about it – that Ancient Rome really was like this – The Tudors is just Footballer’s Wives in codpieces.

Or, what is much the same thing, Footballers Wives for BBC2.

This essay is collected in  Metrosexy: A 21st Century Self-Love Story