German is a punishing tongue. It is, as anyone who has tried to learn it can tell you, very precise, very strict. Very unforgiving. So imagine what it’s like actually being German.

It’s a fact hardly acknowledged that if the Germans have been so hard on Others in the past it may be because they are so hard on themselves. It’s no coincidence that the father of psychoanalysis was Sigmund Freud, the German-speaking Austrian Jew who struggled to treat the neurotic effects produced by a punishing super-ego shouting ‘Nein!’ to id-level drives wanting to borrow dad’s car for a Friday night joy-ride.

German strictness and deferred gratification has, in addition to psychoanalysis and a little mid-twentieth century unpleasantness, given the world precision engineering – reliable, premium cars that really shift. And no one is more associated with this Germanic gift than BMW.

In the UK the Bayerische Motoren Werke’s marketing slogan is the rather Freudian ‘Sheer Driving Pleasure’. In Germany it becomes the heavily Freudian ‘Freude am Fahren’ (Driving Pleasure). BMW cars promise driving pleasure via German precision and strictness: their deferred gratification becomes our fuel-injected hit. Not for nothing are BMWs popularly associated with marketing men and drug dealers.

BMW are based in Munich, capital of Bavaria (just across the border from Freud’s Austria), a place so German that even its beer has been strictly regulated: in the 16th Century The Bavarian Purity Law decreed that only barley, hops and water could go into beer. Likewise BMW’s famous Munich architecture is impressively pure, austere but intoxicating. Their HQ, the glorious ‘Four Cylinder’ building, opened in 1972 next to the Olympic Park, named after their most famous and distinctive car, was designed, along with the ‘silver bowl’ BMW museum, by Austrian architect Karl Schwanzer.

The latest addition, the BMW Welt, designed by Schwanzer’s pupil Wolf D. Prix (and no, I’m not making these names up), and opened last October, also sits at the feet of Dr Schwanzer’s work – literally and aesthetically. With it’s low, flowing, silver and matt profile and shiny double cone ‘grille’ at the front it resembles the architecture of a modern BMW. Inside it showcases all the latest models. The New York Times described its cathedral-like apparently ‘floating’ roof as ‘the closest architecture has come to alchemy’. 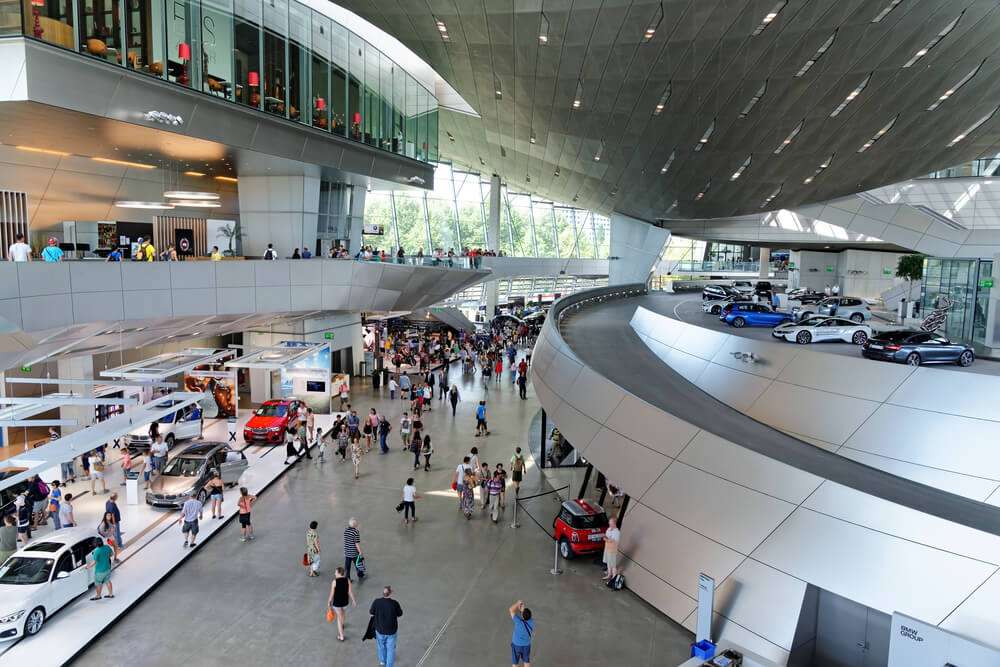 The real alchemy of the building however is the transformation of a mass-produced car into something personal something emotional – the philosopher’s stone of 21st Century consumerism. The Welt is primarily a place for the customer to be seen collecting his immaculate new car, with all his specially-selected modifications, presented like a pristine work of art or airbrushed supermodel revolving slowly beneath a spotlight on one of the 20 turntables on the first ‘Premiere’ floor – a floor that, like the roof, seems to hover, religiously, in mid air. Less of a new car pick-up than a celebrity wedding, complete with photographer snapping you and your glossy, expensive betrothed clinching while the public gaze enviously down from the gallery.

In the noisy but very orderly BMW Plant next door, which you can tour before meeting your lifestyle-mate, ‘marriage’ happens to be the technical term used to describe the lowering of the car body onto the chassis and engine (by headless robots). But it is the pleasure-factory of the BMW Welt, with 170 new cars delivered daily, that performs the much more important ceremony of marrying the owner with his vehicle – a marriage of individualism with mass production: auto-eroticism.

Fired up by witnessing the inspiring, fuel-injected nuptials on the first floor of the Welt you can rush downstairs to the Designkonfigurator, a hi-tech matchmaker, where you can select your ideal BMW partner: the model, package, trim, interior and colour – and then zoom around it in 3D on a giant screen to make sure it is really something you want to share/express your life with. Or something that will get you hard.

Alas, the Designkonfigurator is ultimately limited – repressed even – in the degree of personalisation it can offer. For a glimpse of something really expressive, you have to take a look at BMW’s famous Art Cars, a number of which are housed in the BMW Museum. Design engineers work as part a team (designing for a mass, if moneyed market). Artists on the other hand are more… sociopathic. 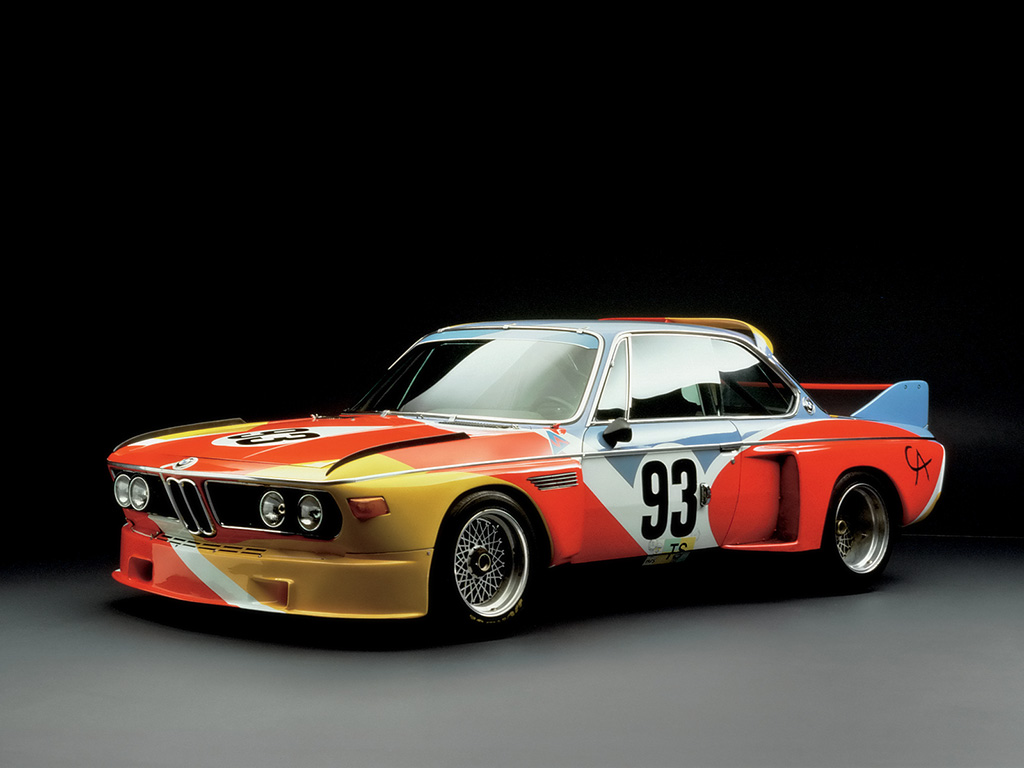 It seems apt that BMW’s famous Art Cars were the idea not of a German but of a Frenchman, the racing driver and art auctioneer Herve Poulain who wanted to combine his two passions in one object – driven, of course, by him. In 1975 he persuaded BMW to commission the American sculptor Alexander Calder to paint his BMW 3.0 CSL 6cylinder4valvestwinoverheadcamshafts480bhp (stats are more arousing when rendered in German) who styled it in bold primary colours and white stripes that worked against traditional streamlining asserting a perverse individuality – Go Slower stripes.

They didn’t slow down Poulain, however, an who drove Calder’s artwork in the 1975 Le Mans 24 hour race and was in number 5 position when mechanical failure forced his departure. Engineering not art failed him. 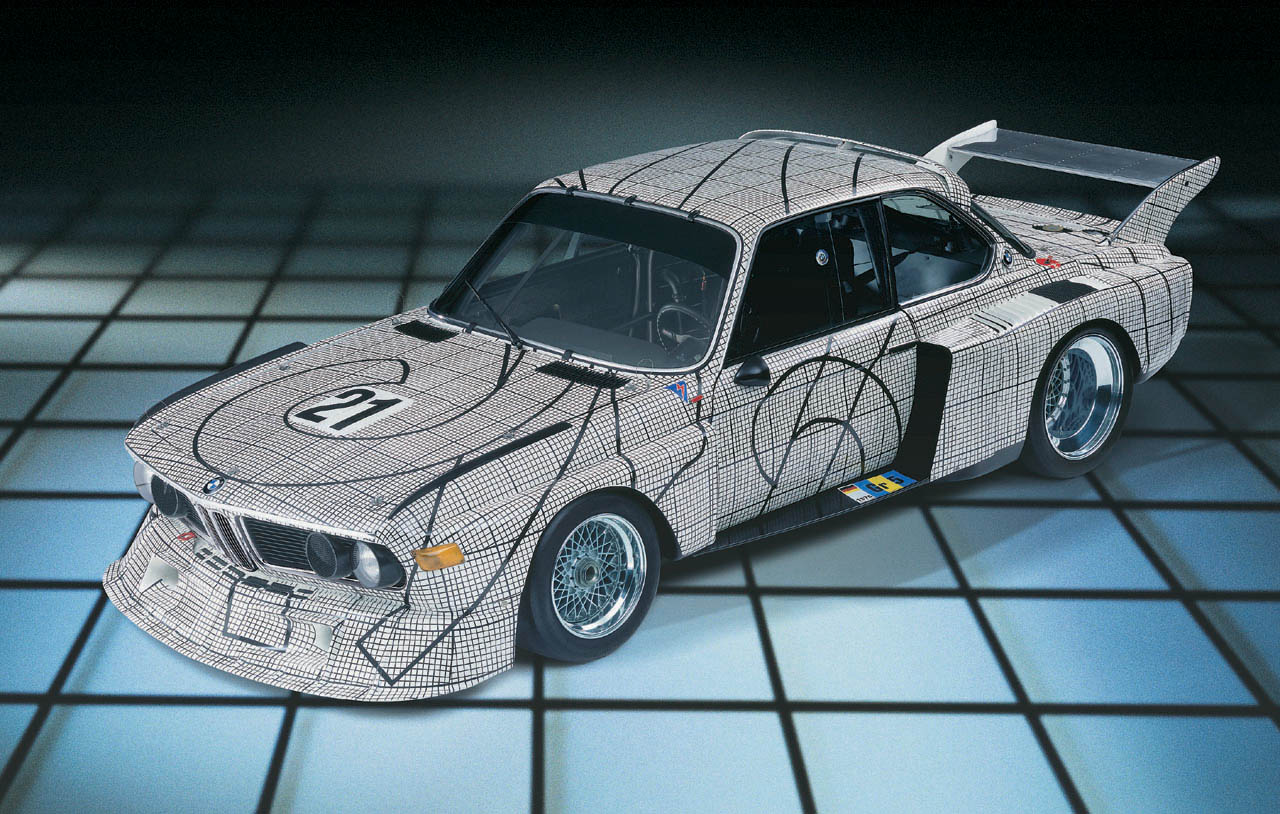 The following year Frank Stella, another American, was commissioned to art up another Le Mans car, the BMW 3.0 CSL 6cylinderinlineturbocharged4valvestwinoverheadcamshafts750bhp (above), which in its precise geometric designs seemed to turn the car’s engineering inside-out: ‘my design is like a blueprint transferred to the bodywork’, he said about his handiwork which, like other things found on graph-paper, managed to be both interesting and slightly boring at the same time. 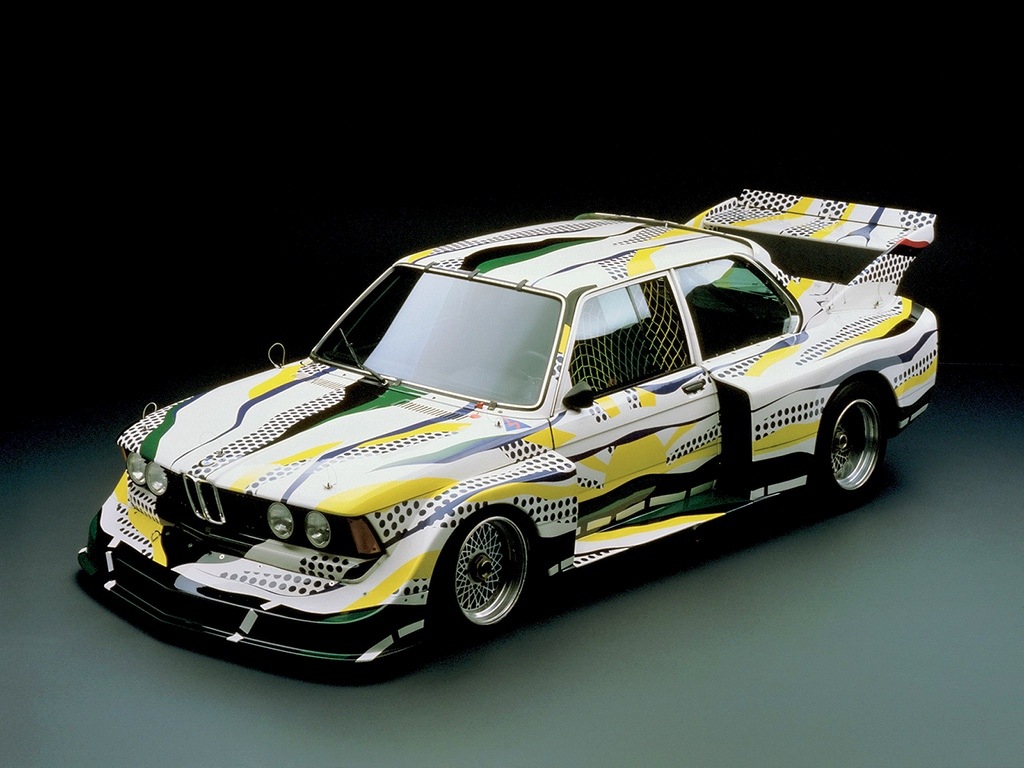 Probably the greatest Art Car was designed the following year in 1975 by Roy Lichtenstein, the Daddy of Pop Art, who, with ‘speedlines’ and oversized dots, transformed a Le Mans 320i 4cylinderinline4valvestwinoverheadcamshafts300bhp BMW into a 3D comic strip (above). Or rather, revealed it as a comic strip. Lichtenstein’s Art Car is both the boyish, joyous idea of a car, and also the story of a car, reflecting the sky, sunshine and scenery as it whizzes freely through our imagination. One of the most beautiful, most pleasurable cars – perhaps the most car car – ever. It really should be an option at the Designkonfigurator. 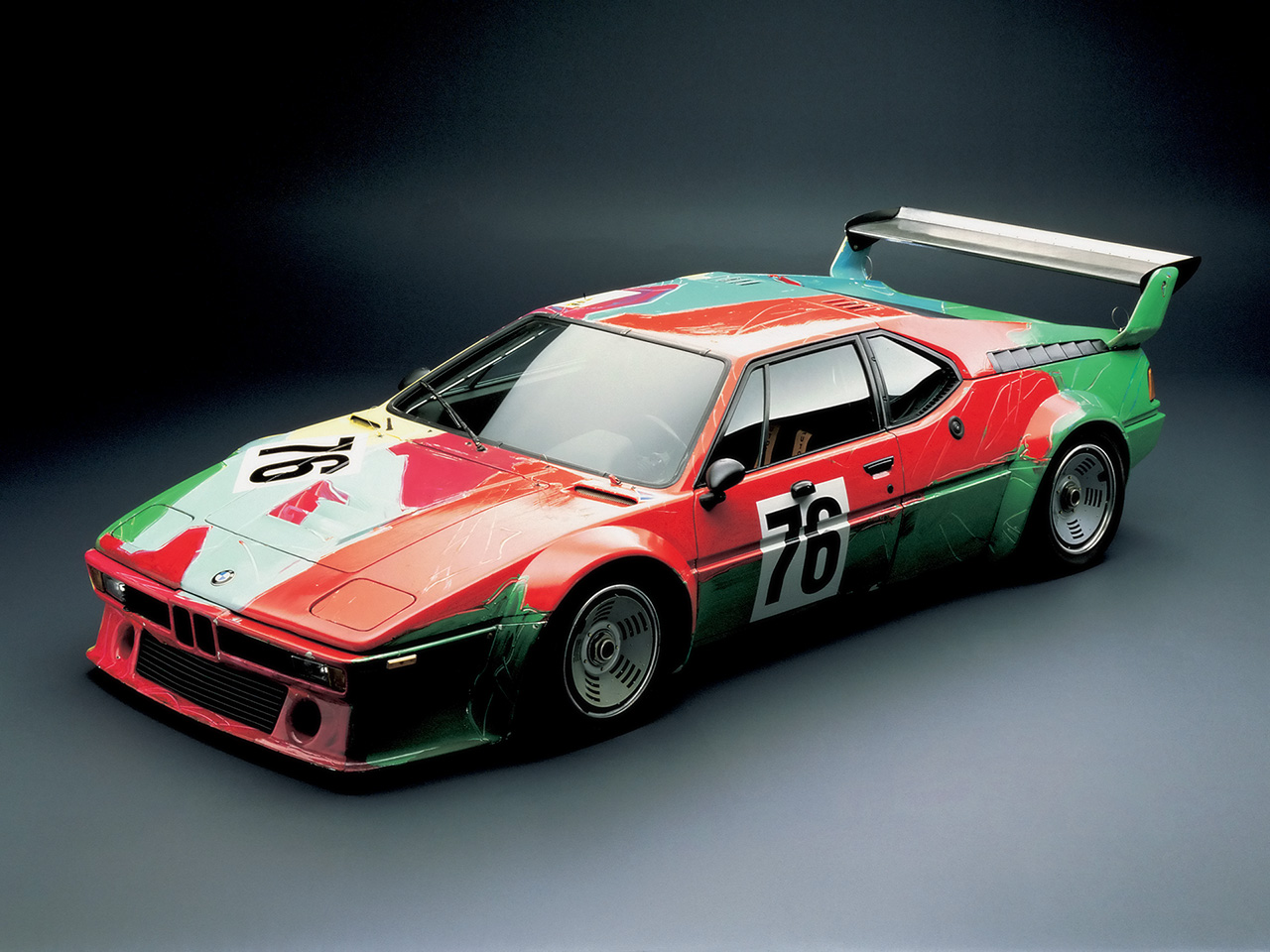 By contrast, Warhol’s 1979 racing M1 6cylindertwinoverheadcamshafts470bhp BMW (above) looks slightly earthbound. Like a car vandalised by a man’s angry wife with some Dulux emulsion that he was supposed to decorate the bathroom with weeks ago. But it is a Warhol and so is probably now worth more than BMW. 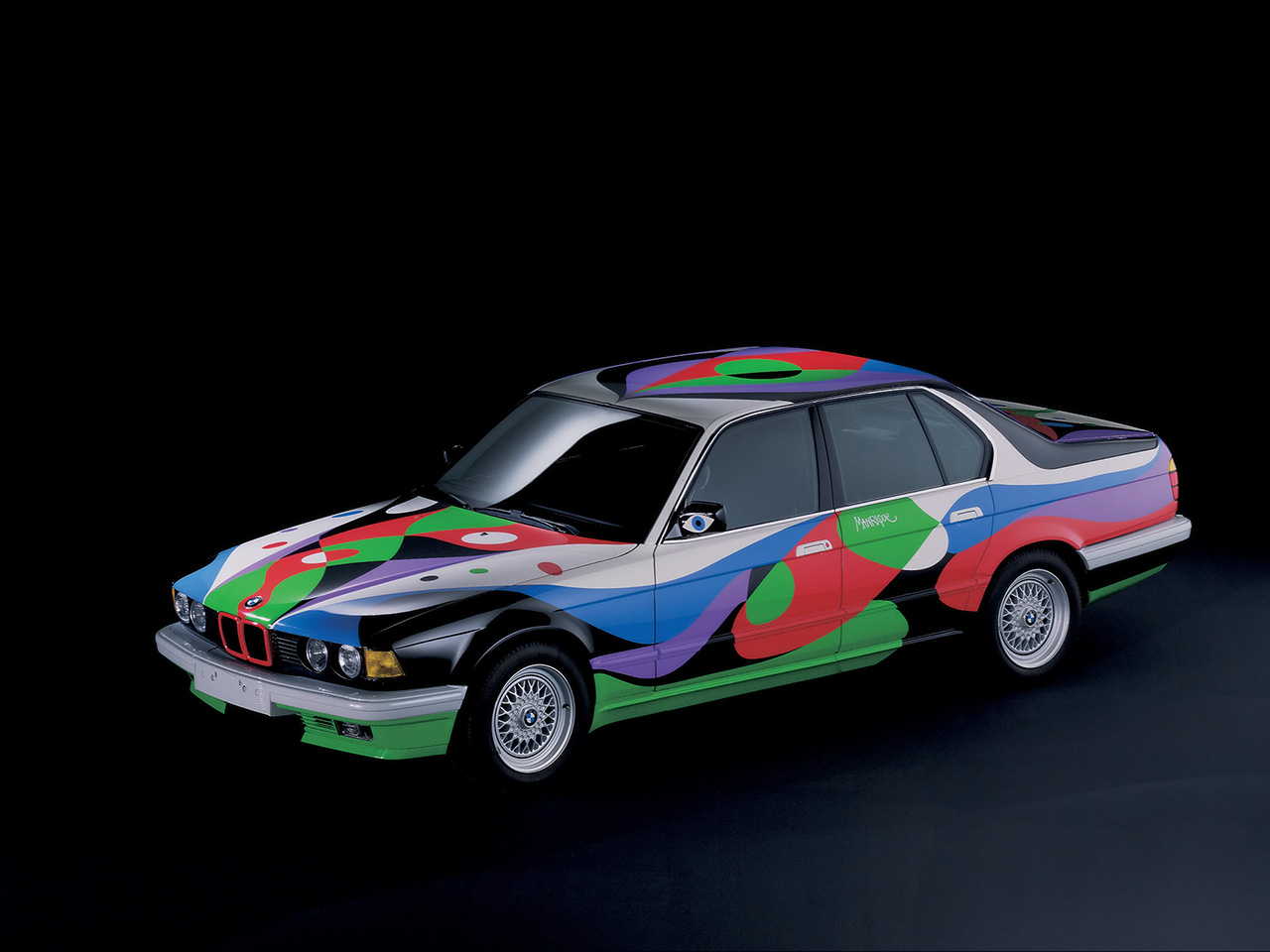 Spanish sculptor and architect Cesar Manrique took a 730i 6cylinderinlineoverheadcamshaft188bhp BMW in 1990 and turned it into a moving sculpture of colours (above). “I tried to unite the notion of speed and aerodynamics with the concept of aesthetic appeal in one and the same object,” he said. He succeeded. Half car, half training shoe – but in a very good way. I’d wear it. 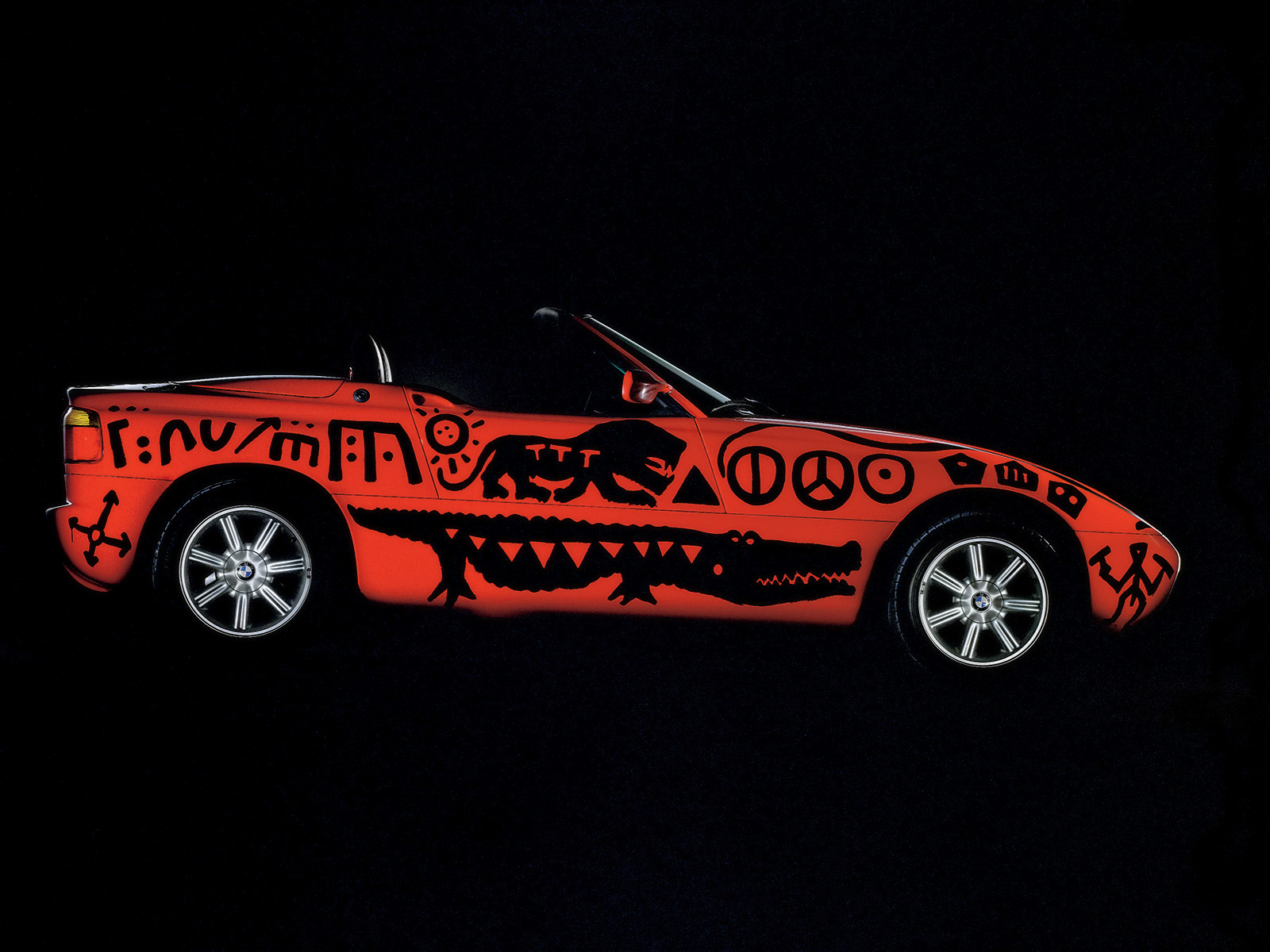 It wasn’t until 1991, sixteen years after Calder, that the first German-authored BMW Art Car appeared – the Z1 6cylinderinlineoverheadcamshaft170bhp by A.R. Penck (above). Perhaps it isn’t without significance that, with its black inked abstract symbols tattooed on blood red this first German-authored Art Car looks less pleasurable than scary-psychotic – the Cape Fear Art Car. 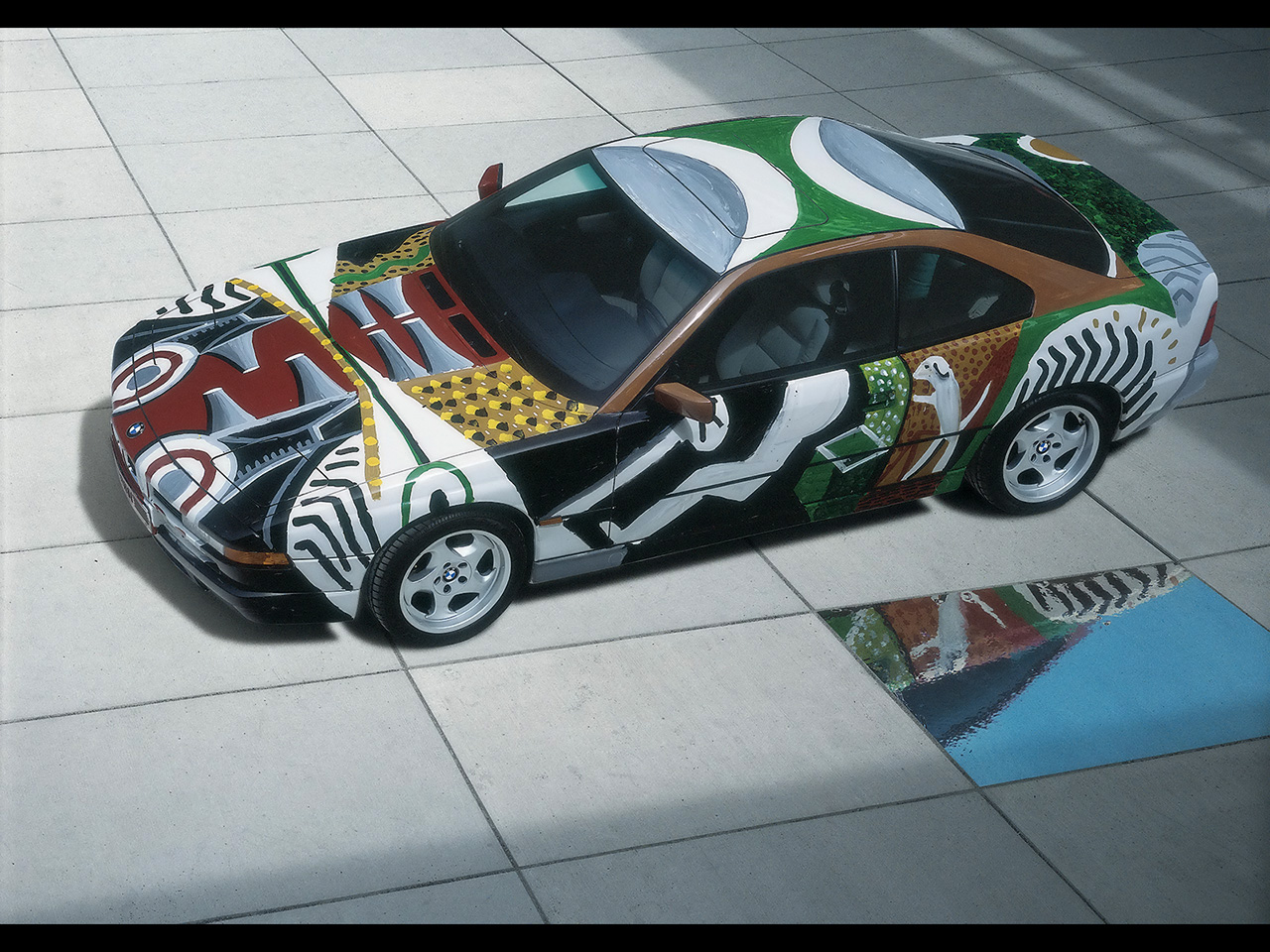 Perhaps as an antidote, in 1995 British West Coast émigré David Hockney produced a Surfer Art Car with his breezy X-ray of a brooding BMW 850CSiVtwelvecylinder380bhp (above). Hockney’s open-air beach-buggy treatment, complete with dachshund, was almost an act of subversion against the austere, extremely serious Bavarian engineering. His only comment was equally Hockneyian: ‘It was lots of fun’. 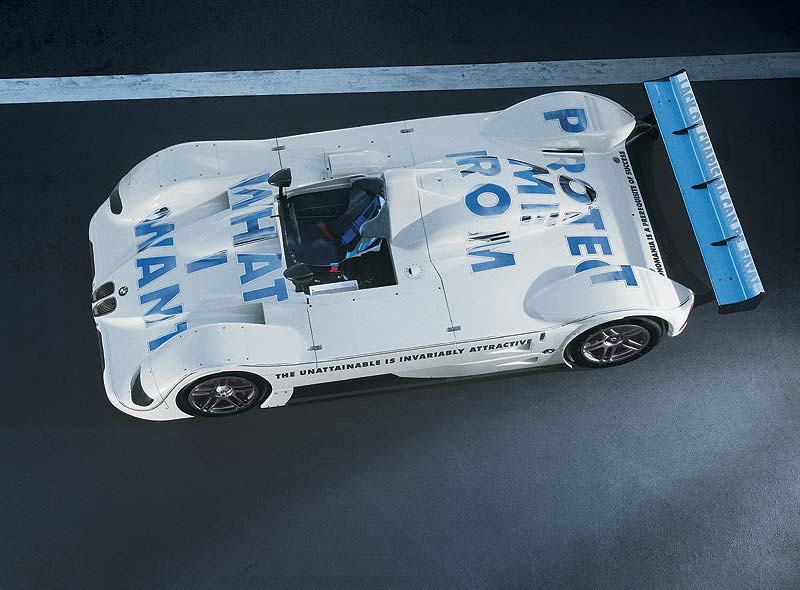 But pleasure, as Sigmund showed, produces its own anxieties. In 1999 the American conceptual artist Jenny Holzer emblazoned the white body of a BMW Le Mans Roadster twelve-cylinderVinduction580bhp with the words ‘PROTECT ME FROM… WHAT I WANT’ – in chrome, reflecting the sky, and light-absorbing paint, which, like our desire and our conscience, glows in the dark.

By 2007 consumerism in general and cars in particular were, according to the headlines, threatening us with destruction. The Danish artist Olafur Eliasson famous for his ‘weather’ installations, was commissioned by BMW to turn their revolutionary hydrogen-powered racing car the H2R into an Art Car. Hydrogen is clean-burning and produces mostly heat and water – and, to guarantee their future, BMW plan to use it in their production cars instead of petro-fuels. 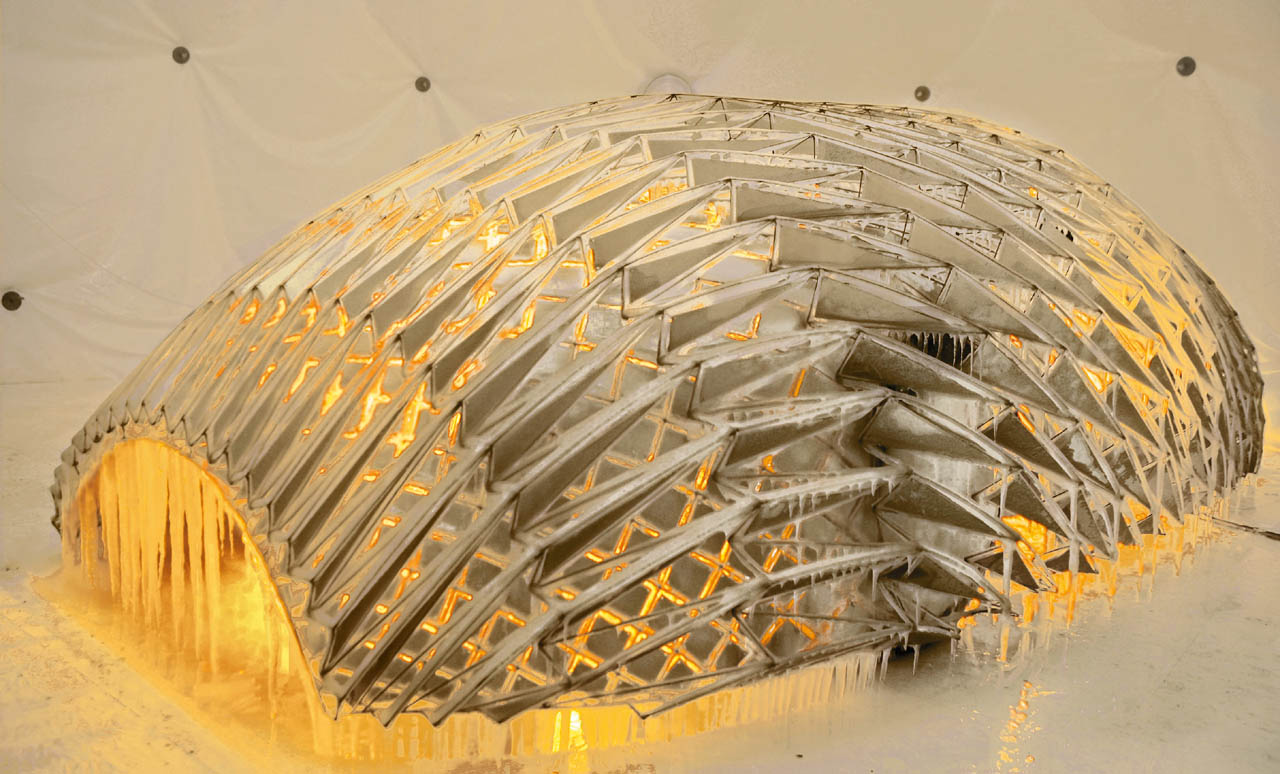 Eliasson removed the body and replaced with steel mesh and reflective steel panels, then sprayed it with 530 gallons of water (H2O, geddit?), frozen over the course of several days, to produce several layers of ice. Lit from within, it looks like a Futurist igloo. Though of course the futurists would have made it look like it could actually move. Meant as a commentary on man-made global climate change, this most recent Art Car is provocative – but looks least like a car: it appears to have been completely entombed by the icy disapproval of environmentalists.

One that we’re all beginning to hear.