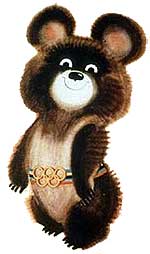 Mark Simpson on the Cold War with Cuddly Toys

The titanic Superpower confrontation of the early 1980s between the Soviet Union and the United States saw the deployment of several new and terrifying strategic weapons systems, including Cruise Missiles, Pershings, SS-20s, B1 Bombers, and SDI/Star Wars.

But undoubtedly the most powerful, most feared and most sophisticated of these weapons systems was a smiley cuddly toy called Misha.

Unleashed at the height of the Cold War, at the Moscow Olympics of 1980, boycotted by the US and her allies because of the Soviet invasion of Afghanistan, Misha the bear cub, or to give him his full, chilling title, Mikhail Potapych Toptygin, left the West completely defenceless. A triumph of art, marketing, propaganda, and plush toys, Misha appeared on hundreds of different badges, in plastic, porcelain, rubber and wood. He was the most commercially successful and thoroughly exploited Olympic mascot ever. It took Communists to realise the merchandising potential and political power of fluffiness.

To understand the scale of the Soviet triumph that was Misha you have to look at (gingerly, through your fingers) what went before: 1968 Grenoble’s Winter Olympics ‘Schuss’ or ‘skiing sperm’ as it came to be known, Munich 1972’s radioactive Wiener dog, and Montreal 1976’s black beaver Amik, a turd tastefully tied-off with a chocolate-box ribbon. 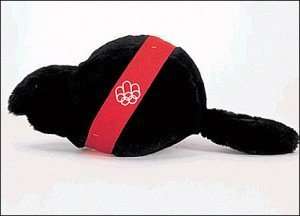 Misha, who became the smiley, irresistibly furry shape of Brezhnevism, was a labour of love. Famous children’s illustrator Viktor Chizikov took six months to perfect him, drawing over one hundred variations. His big dark wide eyes, trusting smile and irresistible cuddliness inverted the Western view of the USSR and Russia as a scary, slavering, lumbering beast. Misha’s humane, friendly face foretold the arrival five years later of that other cuddly Mikhail, the one with that adorable birthmark on his forehead.

The US, understandably panicked by Red Misha, commissioned their ideological department, better known as Disney, to come up with a response to this strategic threat. Sam, a bald eagle, the national symbol of the US (and also of the USMC, which the previous year had invaded Grenada), wearing a natty stars and stripes (Capitalist?) top hat and bow tie, was rolled out as the official mascot for the 1984 LA Games. 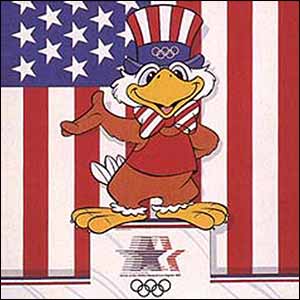 Although better than most mascots, Sam was rather less lovable and much crasser than Misha, and in this Cold War of cuddly toys it was generally agreed that the USSR had won.

The end of the Cold War proper shortly afterwards, and the non-ideological nature of the Games that followed, meant that mascots once again reverted to their pre-Misha harmlessness – and tackiness. 1988 Seoul’s ‘Hodori’ looked like Tony the Tiger with tassels. OK, but not Grrrrreat. 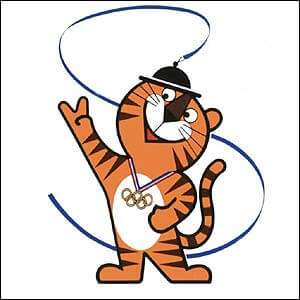 Better than most, 1992 Barcelona’s sniggering surreal dog ‘Cobi’ was unloved at first but won many over in the end. 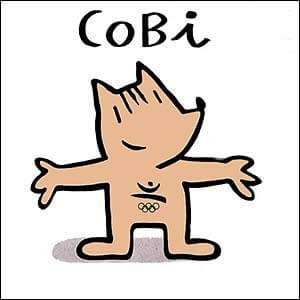 The Sydney Olympics in 2000 featured a Platypus, an Echidna and a Kookaburra that appeared to be a rejected Aussie kid’s TV line-up (and were in fact rejected by the Australians). 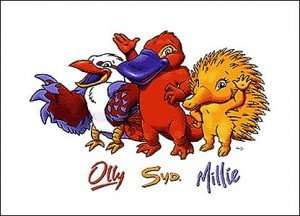 Athens in 2004 deployed Athena and Phevos, gods of wisdom and light, who might have been formidable if they hadn’t been rendered in Playdough by an angry two year old. 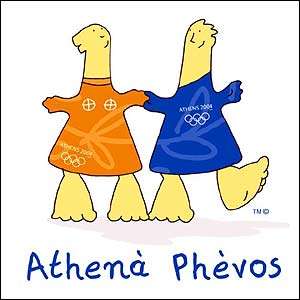 The undoubted nadir though was Izzy (from ‘Whatizit?’) in Atlanta 1996. An ‘amorphous abstract fantasy figure’ Izzy was an aesthetic tizzy who only symbolised how the post-ideological world had no place for iconography or, for that matter, humanism. The End of History meant not only dreary Olympics, but a wider culture lacking a sense of importance or purpose. Worst of all, it meant really daggy mascots. 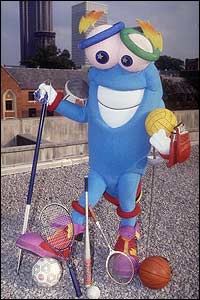 But now, eighteen years on from Moscow, another Communist giant is hosting the Games, determined to exploit them for every last scrap of propaganda. Consequently they threaten to be the most spectacular yet. The Soviet Union may have been consigned to the dustbin of history, but the country it taught how to organise a proper flag-waving parade, the People’s Republic of China, goes from strength to strength, dividend to dividend – and wants the world to know about it. Everything, from the Stadium to the stickers, is going to be a huge, fluttering statement.

The Games might officially hark back to the freedom-loving ideals of Ancient Greece, cradle of democracy, but it takes a good old-fashioned totalitarian state to show us what they really mean: Ideology and iconography plus choreography.

And all these things come together in… fluffy toys. Undoubtedly, China’s ‘Fuwa’ mascots for 2008, impish energetic cartoons based on popular Chinese animals, have been given more thought than all the ones since Misha put together. That there are also five of them, the most ever, is a reminder of China’s populousness, its dynamism, and its new-found Capitalist wiliness: five mascots = five times as many sales opportunities.

And you can be sure these mascots, like everything else theses days, are made in China. (They will also be official: China, the home of cheap knock-offs is cracking down hard on Olympic cloning.) 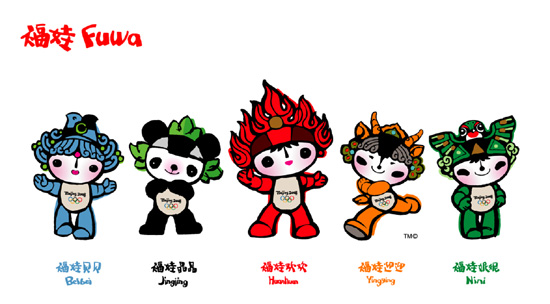 A collision of Chinese astrology, Communist ideology and Sino hegemony, perhaps these mascots – with their ‘superpowers’ – symbolise a little too much. Their names also spell out ‘Beijing welcomes you’. Or is it ‘Welcome to a Chinese 21st Century’? The elemental nature of the Fuwa mascots also looks like an augury of the future: given its recent phenomenal growth China may one day monopolise these resources.

The flame of the fluffy marketing and ideological triumph of the Moscow Olympics has been passed on to Chinese Communism – which, unlike the USSR, is still around today only because it effectively went Misha back in the 1980s, now doing Capitalism and consumerism better than the West. Being very, very careful, of course, not to allow the emergence of a Misha Gorbachov: instead at Tiananmen Square the leadership crushed its own people like they were… toys. Rather than granting its people human rights, China set about making everything the rest of the world wanted – and at a snip.

So I predict the Fuwa, or Chinese Spice Girls, will be a great success with kids and adults around the world, and cause China to open a couple of dozen more power-stations, as well as paying for at least another aircraft carrier.

Special thanks to Jo-Ann Furniss

You Senseless Things: The Stones Speak

Who’s the Diva? Hillary or Obama?