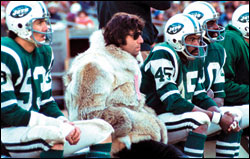 Jake Gyllenhaal is to play Namath – popularly dubbed ‘Broadway Joe’ – in a Hollywood biopic of the Hall of Fame sportsman who was the first American footballer to become a multi-media phenemonon and Madison Avenue model.

In other words, the actor who played a metrosexual cowboy will be playing the first metrosexual athlete. It sounds perfect casting – in a postmodern way. Gyllenhaal’s inability to convince as a cowboy, or a Marine, or a blue-collar NFL quarterback is just more grist to the mill of the inauthenticity of modern masculinity.

Jake’s pretty, bottom-boy looks also underscore something else: how Namath really wouldn’t cut it today as an object of desire. He just isn’t attractive or seductive or tarty enough. He looks like what he was: a reasonably nice-looking 1960s quarterback in a fur coat – or pantyhose.

Joe Namath’s most famous ad was this eyebrow-raiser from 1974 for Beautymist pantyhose:

Apparently Namath regretted the ad for nylons which brought out many of his male fans in rash, despite its rather heavy-handed ‘I’M NOT A FAG AND THIS IS A JOKE’ message. It may have been one of the reasons why America, with the possible exception of Dennis Rodham, failed to produce another ‘Broadway Joe’. That and the fact that America is sometimes a more conformist country than Switzerland.

If this ad were to be reprised by David Beckham today you would notice the following differences: