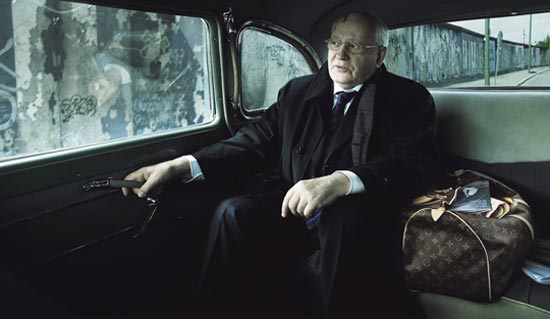 Is it… him? Is it really the man who ended the Cold War? The man who brought down the Berlin Wall – the human face of Soviet Communism, the last face of Soviet Communism? Is he still alive? What in Lenin’s name is he doing in an ad for designer luggage? Is that his bag, or is it Raisa’s? Why is he apparently about to jump out of a moving car? And how much did he get?

So many questions assail you on seeing the ad for Louis Vuitton (shot by the power-lens of Annie Leibovitz) with the famously soberly-dressed Mikhail Gorbachev in the back of a Khrushchev-era limousine sliding past a remnant of the Berlin Wall, it’s difficult to decide whether the image is very smart or very funny, liberating or terrifying. Was the ‘End of History’ really just a photo-op for luxury luggage? Was Perestroika about making the world safe for Louis Vuitton? Well, perhaps.

Wealthy Russians keen to make a statement are a fast-growing market for luxury goods such as LV, both in Mother Russia and abroad: A journey brings us face to face with ourselves, as the strapline to the ad puts it. Whatever Russians themselves may think of the old apparatchik, Gorbachev’s face, heavy with history and tragedy, is the face that launched the new, passionately consumerist Russia.

Oh, and the bag is Gorby’s not Raisa’s. LV are keen for more men to buy their products – products they have decided should be depicted in their ads not as ‘heroes’ themselves, as is customary in fashion and luxury advertising, but as ‘companions on the journey’. So the bag might even in some unconscious way stand in for this hero’s famously glamorous wife – who, alas, died from leukemia in 1999.

How much was Gorbachev paid? This information is discretely unavailable – though LV acknowledge they made a donation to his Green Cross International environmental charity.

One thing we can be certain of: Gorby, a decent man who tried to do the decent thing, was paid considerably less for his services than his arch-rival and bullying, drunken successor Yeltsin was for breaking up the Soviet Union and signing over Russia’s hard-gained industrial wealth to Western-backed oligarchs.

Perhaps that is the real meaning of the image: Gorbachev is travelling back from Yeltsin’s funeral, into posterity – with a nice bag to keep his 1990 Nobel Peace Prize in.