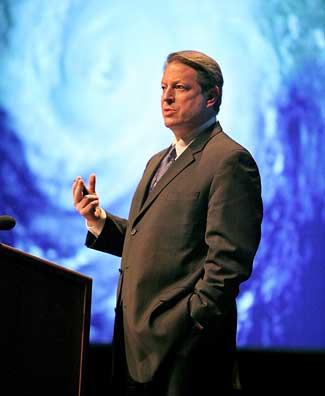 For the sake of the Planet, Al, don’t do it!

Al Gore, former Next President of the United States, Inventor of the Internet, Saviour of the World, PowerPoint Presenter Extraordinaire – and now Nobel Peace Prize Winner – is rumoured to be considering a last-minute bid to be the Democratic Party’s Presidential Candidate.

There’s been a lot of media speculation about whether Al will actually throw his carbon-neutral hat into the ring, but you don’t need to launch a political weather-balloon or take core samples of pack ice to estimate the seriousness with which Gore, despite protestations to the contrary, still covets the Oval Office: the evidence is all there, up on the big screen, in his celebrated, Nobel Prize-winning documentary ‘An Inconvenient Truth’.

Except it isn’t a documentary. It’s essentially a 100 minute Presidential Election Campaign advertisement, with some alarmist extreme weather reports thrown in, which, even by the standards of US campaign ads shamelessly sells Gore, his apple-pie all-American childhood on his parent’s 1950s farm, his sister’s sad death from lung cancer, his diligent, pointy-headed study at University, his public-spirited time in High Office, and his saintly-but-oh-so-lonely proselytising about global warming, dragging his laptop and long face around the US just for the price of a hot cup of coffee (you’d be forgiven for believing), once out of it. All with a schmaltzy tear-jerking sound-track and Gore’s scripted croaky-voiced sincerity.

The real genius of this election ad though is not that it’s the first to win an Oscar or a Nobel Prize – it’s that it’s persuaded the public to actually pay to see it. But what it has in common with more traditional election ads is that it’s full of lies: nine of them according to the High Court last week.

‘An Inconvenient Truth’ endlessly promotes Call Me Al as the President the United States – and the world – should have had. Even those terrifying giant red graphs as big as houses he flashes up (with axis rubric that, strangely, is so small we can’t read it) are really the exit polls from the 2000 election showing how he was robbed.

In other words, a pompous ass.

It isn’t Gore’s vanity that is so impossible to stomach – it’s his total inability to own it. His vanity is the vanity of the ‘humble preacher’ – the deadliest vanity of all.

One of the nine lies that the High Court nailed moral and spiritual Gore with recently was his claim that Hurricane Katrina was the result of global warming. In terms of the naked scaremongering of Gore’s film – vote for me or else you all drown/starve/die of thirst/boredom – this isn’t just a minor issue. Very early on in ‘An Inconvenient Truth’ extensive footage is used from Katrina while we see Gore tirelessly studying his graphs on his trusty laptop. It’s made clear that this catastrophe (and perhaps other ones in far-off hotter, dustier climes) wouldn’t have happened on Gore’s watch. Gore, who walks on water, would have solved global warming and saved New Orleans.

‘In the US, political will,’ says a very tired looking Gore at the end of his film, ‘is a renewable resource!’

Actually, if you want to blame someone for the US’s cancellation of the Kyoto agreement, the inept response to Katrina, the catastrophic invasion of Iraq and the disastrous collapse of the US’s relations with much of the world, don’t blame Bush, who is after, all, what he is and does pretty much what it says on the tin. Blame Gore.

After all, it wasn’t, as the film suggests, Bush or the Supreme Court that stole the 2000 election, so much as it was Gore that threw it away. It should have been a cakewalk, but it became a near dead-heat because he was too moral and spiritual to allow Clinton – the man who’s charisma and political realism had put him in office as Vice President for two terms and put him in a position to lead the Democrats in the election – to campaign on his behalf. Even if Clinton, the most phenomenal campaigner of modern times, had only succeeded in mobilising the black vote Gore would have won without any recounts.

If anyone can get the Republicans re-elected, it’s not Hilary’s femininity, it’s not Obama’s blackness. It’s Gore’s pompous ass-ity.

All You Need is Me

You & Your iPhone: The Perfect Relationship?