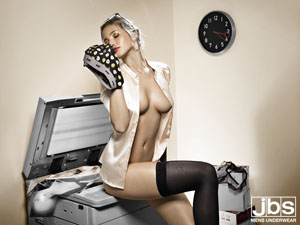 So nothing faggy about JBS then.

But then look at the pictures again and you begin to realise that something really pervey is going on here.

For starters, the women are sniffing the underwear. Do many women – any women – actually do that? Especially with underwear worn by retrosexuals (usually for several days)? Isn’t that in fact something that men like to do women’s underwear – and men’s underwear? Isn’t there some kind of pervey projection going on here?

Maybe JBS is cunningly associating their underwear with the lingerie worn by their babes. JBS is selling itself as the brand for cross-dressers who haven’t come out to themselves yet.

Personally, my favourite JBS underwear is their daggy downmarket range. Here’s their alluring description of it:

For some people underwear is not exactly the most important thing in the world. They want a decent product – and at an attractive price; two requirements you can only completely satisfy by introducing them to JBS Trade.

I’ll take three. Do they do out-calls?

Larry Craig fights on – and best of British to him