Elvis didn’t want to be black, he wanted to be Tony Curtis.

A natural blond, Memphis’ belle boy dyed his hair in imitation of his 50s idol’s shiny black pompadour and continued tinting it that unnatural-supernatural blue-black colour until the very end (though later it was probably merely to hide the grey). Even those virile sideburns, which by the early Seventies seemed to be bracketing the world, were deceivingly dyed too.

I know this is a shocking, indecent thing to bring up, and not just because of the way Tony Curtis’ ‘hair’ looks now. We like to think of Elvis as rock’s Unmoved Mover, The King, the original, the alpha and omega – the fount of all pop cultural sovereignty. ‘Before Elvis there was nothing,’ as John Lennon famously put it. In a world where popness has become the measure of everything, we’re all Elvis impersonators now – and we don’t want to think that we might be inadvertently ‘doing’ Tony Curtis. 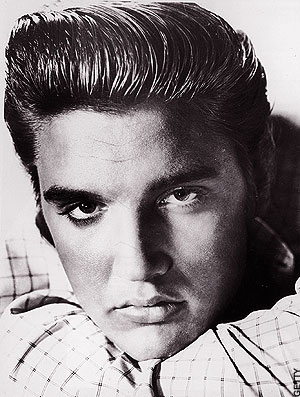 As the parade of celebs who lined up recently for the premiere of the re-released, re-edited, re-mastered 1970 Vegas gig movie ‘Elvis: That’s the Way It is’ bears testimony, all the new pretenders want to be seen in His presence, even if it’s only a celluloid one. Maybe it’s just the PopStars in Your Eyes, but Elvis seems to keep on getting bigger while those that came after him keep getting smaller. Elvis was the first truly giant pop star created by post-war consumerism and it’s attendant media.

Since then, shopping and looking have become everything, and Elvis has become the personification of the looking-glass world we inhabit now, a latter-day Narcissus who drowned in his own reflection (on his bathroom floor) – but granted immortality in a universe of surfaces and permanent (shallow) memory. ‘Elvis’ is Fame’s first name in an age when ‘fame’ is something we’re increasingly over-familiar with. 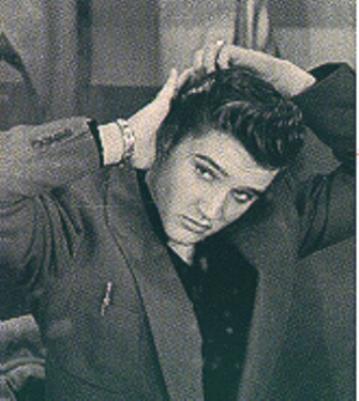 Perhaps this is why in Elvis’ face we can see an angelic/demonic premonition of the needy faces of so many of those stars that have come after: Tom Cruise, Mick Jagger, Michael Jackson, Jim Carrey, Madonna, Bill Clinton, Diana, Jeffrey Dahmer. Elvis’ masculine androgyny and animal smartness seem even more modern today than when he launched his career. In footage of The King in action, all the male faces in the crowd – and many of the women – seem strangely frozen and meatish next to his, even when he is clearly half-paralysed by downers, the eyes all hooded and sleepy. As the lesbian Elvis Impersonator k.d. Laing observed: ‘He had total love in his eyes when he performed…’.

It only makes his ‘total love’ all the more potent that when he sang, he didn’t mean it, or didn’t know what he meant; we are left to sort it out, like the swooning victims of a passionate but exquisitely, totally careless lover (which is the condition of human subjectivity in a mediated world). 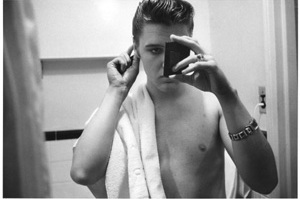 Elvis the Lover is also however the archetype of the post-war male ‘Pervert’. Radiantly narcissistic and dramatically unable to negotiate his Oedipus Complex, he is the prime idolatrous icon of a decadent, post-patriarchal age. Again, he may not have invented virile degeneracy (Clift, Brando and Dean, whom he also imitated, have a prior claim) but he patented it. True, it may have been campy Liberace who was accused of being the ‘quivering distillation of mother-love’, but it was good ol’ boy Elvis-the-pelvis (and Liberace fan) who got away with it and in fact made it cool.

Elvis, the beautiful boy who loved his mammy and almost forgot he had a daddy (as we did too: we always call him by his first name), the boy who desired to be desired so much he persuaded the whole world to eat him up, is the patron saint of the New Matriarchy.

Even today, twenty four years after his death, as we stumble into a century he never actually swung his hips in, Elvis the rock star, pop star, stand-up comedian and self-medicating Vegas showgirl remains the acme of the mediated male, and also of male desirability. Male love-me-tender passivity and vulnerability was endorsed and legitimised and transmitted by Elvis, helpfully preparing men for the (prone) role that consumerism had in store for them.

Tony Curtis fixation notwithstanding, Elvis really is ‘the original’, the template from which everything else is stamped, because he has become the ego-ideal of a mediated, ‘perverted’, dyed-sideburns culture. Since his death, through a process of global mourning and melancholia and constant re-runs and revivals, the lost lurve-object has been introjected into our collective Unconscious so completely that we don’t have to be lonesome tonight or tomorrow or in fact ever again. His absence has become an overwhelming presence.

Elvis really is alive. It’s just the rest of us that I’m not so sure about. 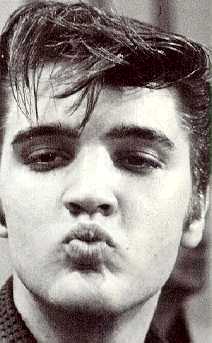 This essay is collected in ‘Metrosexy: A 21st Century Self-Love Story’

The Sun newspaper – how gay is it?