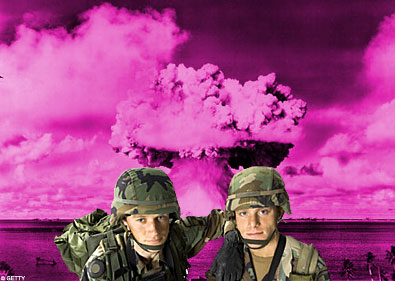 Look out! Take cover! Backs to the walls, boys! It’s the Gay Bomb!

No, not a bomb with fashionably styled fins or one that can’t whistle, but rather a proposed “non-lethal” chemical bomb containing “strong aphrodisiacs” that would cause “homosexual behavior” among soldiers.

Since the United States Air Force wanted $7.5 million of taxpayers’ money to develop it, it probably involved more than the traditional recipe of a few six-packs of beer.

Despite never having been developed, the so-called Gay Bomb is a bouncing bomb – or perhaps a bent stick: it keeps coming back. The media have picked up the story of the Gay Bomb more than once since 2005 – after all it’s a story that’s too good to throw away, and, as this article proves, it’s a gift for dubious jokes.

Mind you, it now seems to be the case that the Pentagon didn’t throw it away either, at least not immediately. In the past the Pentagon has been keen to suggest it was just a cranky proposal they quickly rejected. The Sunshine Project now contradicts this, saying the Gay Bomb was given serious and sustained attention by the Pentagon and that in fact they “submitted the proposal to the highest scientific review body in the country for them to consider.” The Gay Bomb was no joke.

So perhaps we should seriously consider probing-however gingerly – what exactly was in the minds of the boys at the Pentagon back then.

The date is key. The Gay Bomb proposal was submitted in 1994 – the year after the extraordinary moral panic that very nearly derailed Clinton’s first term when he tried to honor his campaign pledge to lift the ban on homosexuals serving in the U.S. military and that ultimately produced the current “Don’t Ask, Don’t Tell” (DADT) compromise that allows them to serve so long as they remain closeted and are not reported.

The newly sworn-in Commander-in-Chief was successfully portrayed by the homo-baiting right wing – and by the Pentagon itself – as a dirty pinko Gay Bomb that was seriously weakening the cohesion of the unit and molesting the noble, heterosexual U.S. fighting man’s ability to perform his manly mission. “Why not drop Clinton on the enemy?” is probably what they were thinking.

Whatever its motivations or rationalizations, the DADT policy of gay quarantine has resulted in thousands of discharges of homosexuals and bisexuals from the U.S. Armed Forces, even at a time when the military is having great difficulty mobilizing enough bodies of any sexual persuasion and is currently being publicly questioned. But the Pentagon seems unlikely to budge its institutional back from the proverbial wall.

Its top commander, Marine Gen. Peter Pace, recently defended the policy in outspoken terms, saying: “I believe that homosexual acts between two individuals are immoral and that we should not condone immoral acts.” (The good General probably didn’t mean to suggest that homosexual acts involving only one person or more than two were not immoral.)

Don’t Ask, Don’t Tell, a policy that even Joseph Heller would have had difficulty satirizing, may be confused and confusing, and it may or may not be repealed in the near future, but it clearly shows that the U.S. remains dramatically conflicted about itself and the enormous changes in attitudes and behavior that its own affluence and sophistication have helped bring about.

After all, the Gay Bomb is here already, and it’s been thoroughly tested – on civilians. It was developed not by the U.S.A.F. but by the laboratories of American consumer and pop culture, advertising, and Hollywood. If you want to awaken the enemy to the attractiveness of the male body, try dropping back issues of Men’s Health or GQ on them. Or Abercrombie & Fitch posters. Or Justin Timberlake videos. Or DVDs of 300.

Or even the U.S.’s newly acquired British-made weapons system for delivering global sexual confusion and hysteria known as ‘David Beckham’.

To paraphrase the Duke of Wellington: I don’t know whether they frighten the enemy, but by God they scare the Bejeesus out of me.

Trading in the past: Queer London