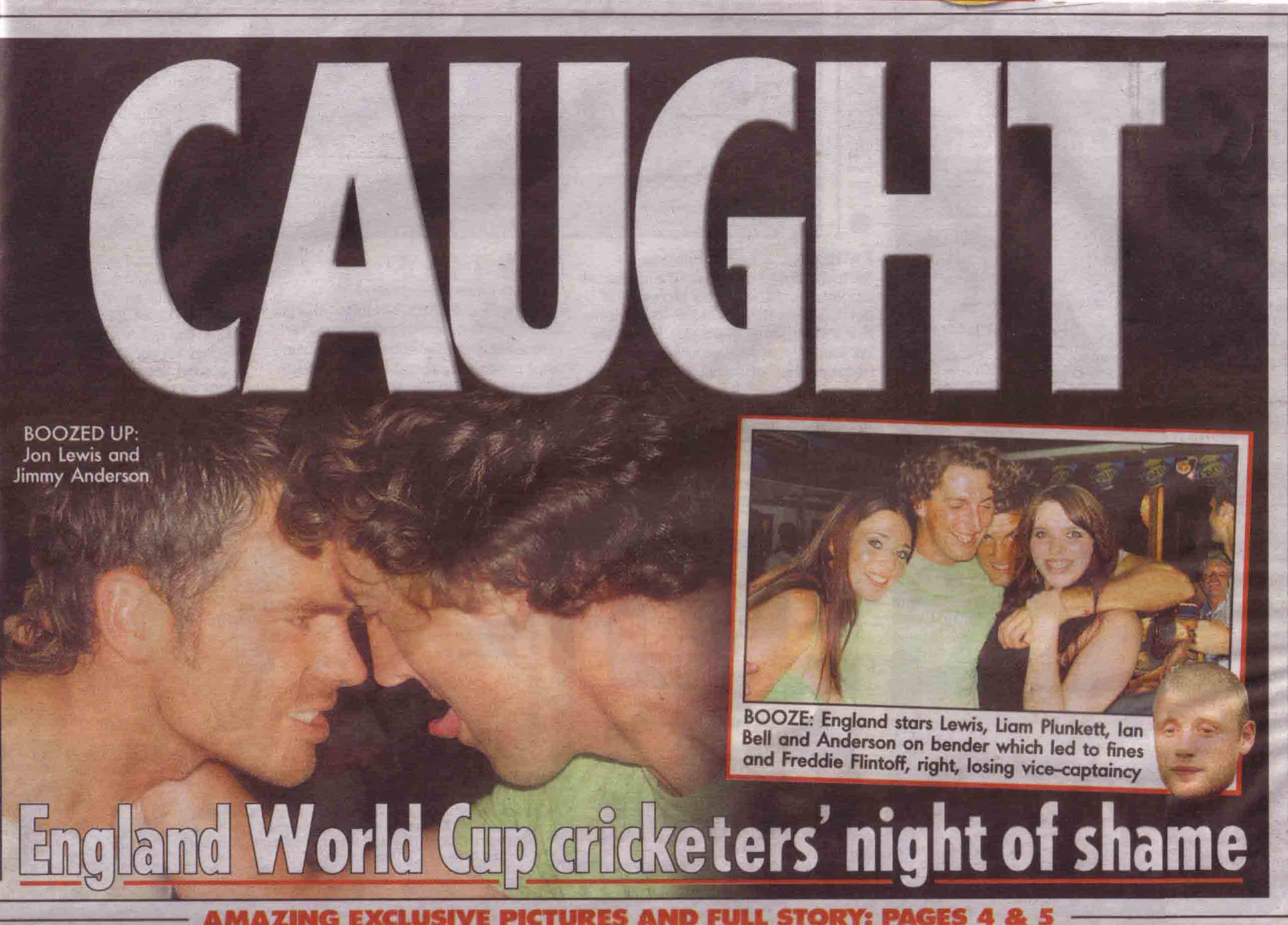 Yesterday’s Daily Mirror, Britain’s second most popular newspaper, and supposedly the ‘progressive’ tab compared to The Sun, carried a special treat for its readers. On the front page of thisfamily paper was a picture of hunky England cricketers Jon Lewis and Jimmy Anderson moving in for a tasty tongue sandwich.

This just gets hotter and hotter! God Bless the British tabs! They really know how to work up a man-love story.

So, pulse quickening, upper lip moistening, I flicked hurriedly to pages 4 and 5 for the ‘AMAZING EXCLUSIVE PICTURES AND FULL STORY’.

STREWTH! Imagine a nation’s disappointment! All the sods offered was a b/w snap of Anderson planting a wet one on 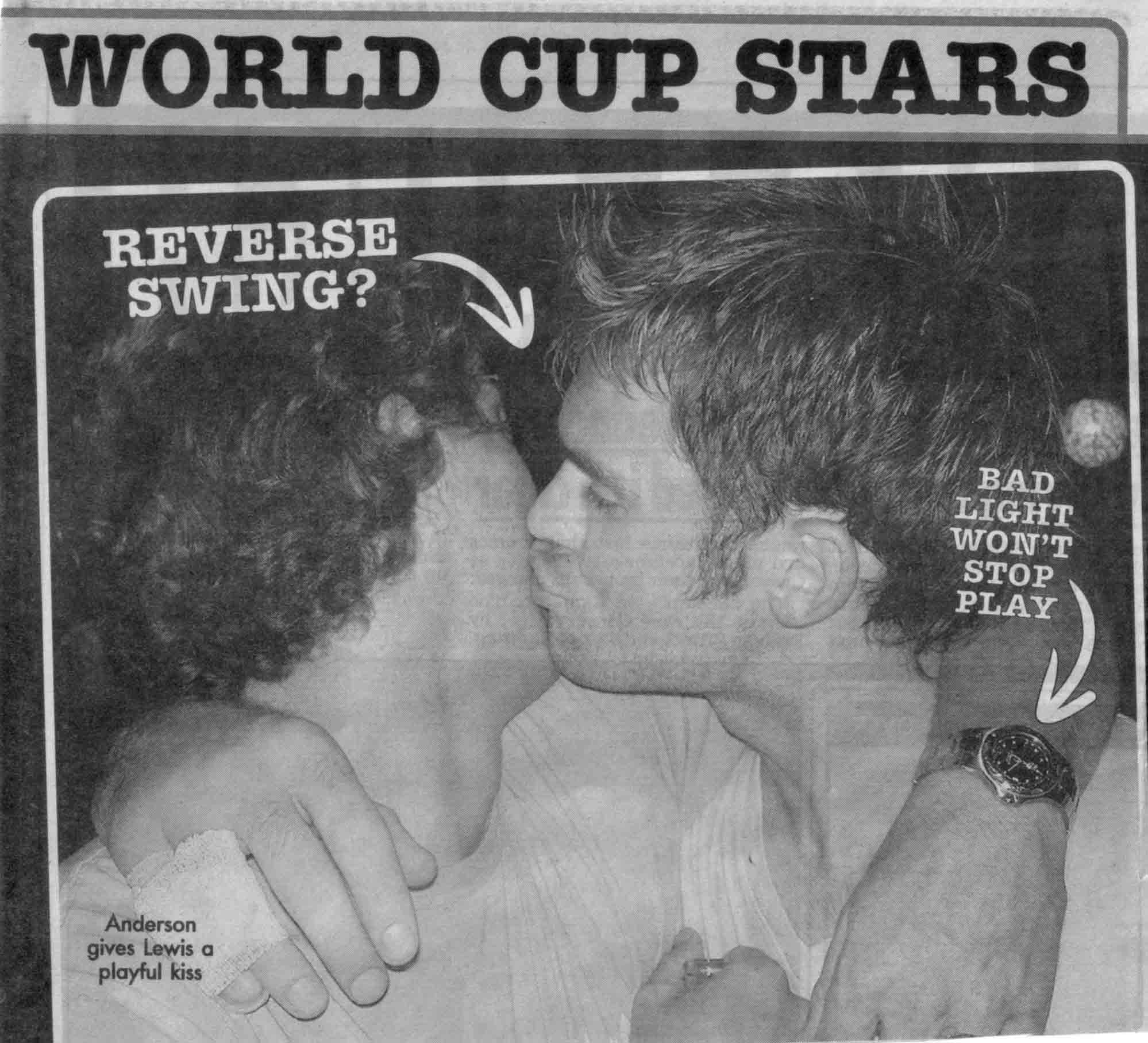 Lewis’ cheek and some other snaps of bog-standard drunken lads behaviour, some involving random bimbos. WOT A FLOP!! England’s recent poor peformance on the pitch is as nothing compared to this.

Things were so bad I had to resort to reading the copy:

ENGLAND’s boozed-up cricket stars shamed themselves during an eight-hour bender just 24 hours before their World Cup match against Canada.

The disgraceful antics led to the four players being fined and Freddie Flintoff – who had to be rescued at sea after capsizing a pedalo – being stripped of the vice-captaincy.

Flintoff said last night: “To my team mates and the England supporters I’m extremely sorry.” Yesterday England put up a feeble performance against Canada, one of the weakest teams in the tournament.

No doubt the ‘feeble performance’ was down to all that snogging one another. 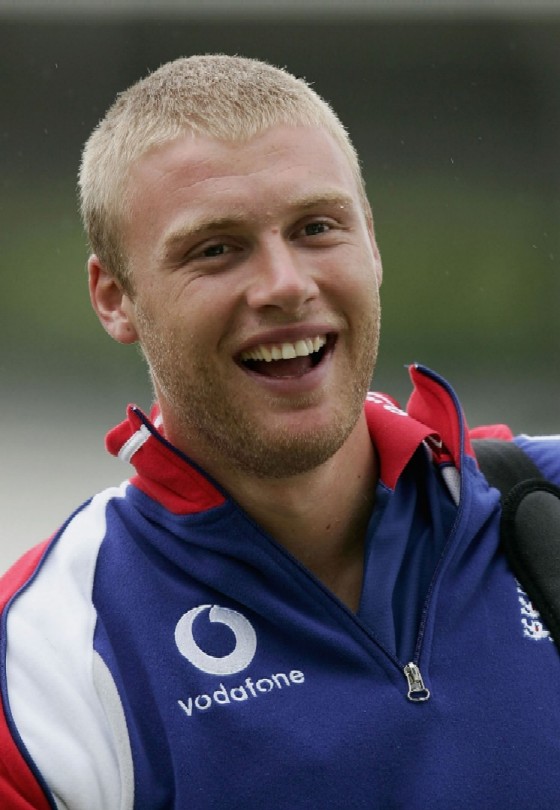 Freddie, stripped or not, was not seen in the ‘appalling’ and ‘disgraceful’ antics which most preoccupied The Mirror. Which is a shame, because he looks like a good man-snogger to me.

Whether or not Freddie & Co. deserved to be punished for getting pissed up on a school night I can’t say, but I think the editor of the Mirror should definitely be fined for being such a shameless and ‘appalling’ pricktease.

I’m sure they must have snaps of the England cricketers snogging properly and manfully with tongues and everything, but they didn’t print them. (And if they didn’t snog one another properly then England really is in trouble.) Perhaps they were considered ‘too shocking’ for Mirror readers. But then, the same paper had no problems with printing colour pictures of Madonna implanting an Alien baby in Britney’s chest cavity at the MTV Awards.

Young English straight men can’t stop snogging one another when they get bladdered. It’s one of the main reasons for getting bladdered in the first place. Trust me, I’ve made a study of these things. I have stood in a bar watching rugby teams French kissing one another in a way that puts the heavy petting in gay bars to shame and wondering when I was going to self-combust. I’ve regularly seen battle-hardened squaddies snog one another in pubs in garrison towns, eyes closed, for longer than I can hold my breath, often in front of their bored girlfriends.

Next time, I’m taking pictures of these shameful antics so you too can be appalled.