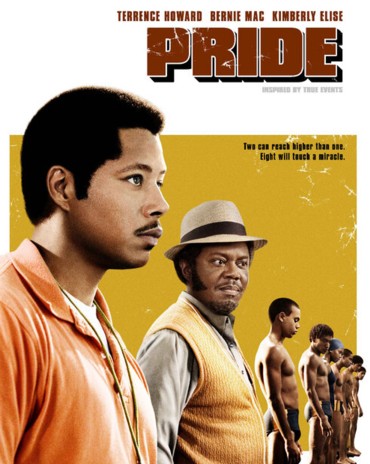 Following my recent ‘Speedophobia’ feature for OUT about the American Phalliban, it seems the terrifying outline of male genitalia is still striking fear into the hearts of our Colonial cousins – even in movies set in the tight-fit 1970s.

According to Rod 2.0 the American Motion Picture Association of America was so alarmed by the Speedo-clad silhouette of Evan Ross’s packet in a poster promoting ‘Pride’, a film about Philadelphia’s first black swimteam they accused the film-makers of digitally enhancing his, erm, pride and refused to approve it. (Ross, Diana’s son no less, is the first unclothed Speedo-wearing swimmer from left to right.)

Now, at the risk of sounding like a jaded size queen it doesn’t seem to me to me to be that big a deal. It’s definitely, reassuringly there, if you know what I mean, but not in a tremendously ‘enhanced’ way. Besides, he’s part of the background and the two men in the foreground are fully clothed. One is even wearing a hat.

So what was the AMPA thinking of? Well, perhaps they weren’t thinking but day-dreaming. The (probably mostly white) board saw a black phallus in black Speedos titled with the word ‘PRIDE’ and got all steamed up. Either way, they wanted a closer look: they demanded the film-makers provide them with the original artwork.

Remembering though the titanic trouble the makers of last year’s ‘Superman’ went to to get his package ‘not too big’, ‘not too small’ and ‘not too pointy’ – apparently it was the single most ‘pressing’ costume concern – it’s clear that whitey has to be smooth and tidy too. And wear red-alert containment pants over his kinky blue Spandex all-in-one.

Both penis-panics ‘point up’ something rather ticklish about the US phalliban – in its haste to shield America’s honour from the jaw-dropping, mind-reeling horror of the silhouette of men’s bits it merely reveals that Uncle Sam is thinking rather a lot about cock. Black and white and all the delicious shades in between.

On The Town in NYC With Glenn/Glennda, Two Bruces & Two Old Musicals