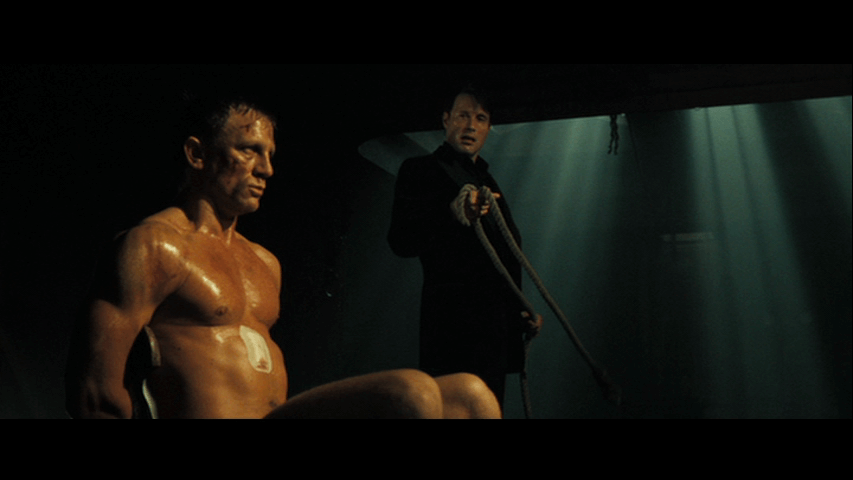 I finally saw the new Bond film starring the new Bond Daniel Craig last night (my OUT essay was written sight unseen – winging it entirely by the seat of Craig’s pants).

Bond is now the ‘Bond Girl’ of the opening credits. It’s his silhouette we see – and nary a dancing naked babe in sight.

Perhaps to compensate for this, in the actual film he gets his tits out a lot.

He emerges from the sea glistening, showing off his pumped boobs, like Ursula Andress in ‘Dr No’ – save his nipples are more prominent.

Perhaps because of all that time he’s spent in the gym with his circuit-party personal fitness trainer he has a narcissistic self-sufficiency and isn’t very interested in shagging birds for shagging’s sake. He uses his body like a female spy: as bait. Luring, teasing, seducing his female targets and fishing for information just as they’re eagerly sliding their tongues down his six pack. Unlike previous Bonds, he doesn’t even have the courtesy to shag the girl after he’s extracted the information about the man he’s after.

For the first time it’s entirely possible to imagine Bond sleeping with a man – especially if it meant he would get something he wanted. Not least because Craig’s Bond is clearly MI6’s rent boy.

Speaking of which: The main sex scene in the film, and certainly the most explicit, features Craig being tortured in the buff in a rusty dungeon (or is it a back room in a gay leather bar?) by the evil Mr Big who pauses to compliment him on his physique. Craig sits strapped bollock naked in a rim chair while his (unseen but vividly imagined) blond bollocks are bashed with a big ugly heavy knotted rope.

Although in agony, he appears to actually enjoy the experience and eggs his torturer on: ‘To the right a bit!’ When the rope thwacks his gonads even harder and repeatedly he yells: ‘YESSSSSSSSSSS!’. All in all, he comes across as a classic Pushy Controlling Bottom.

His masochism is of a piece with his narcissism and his sex-object status. According to Dr Freud, to invite the gaze, as Bond does in this film over and over again, is passive and therefore masochistic. Craig’s Bond may oscillate between thuggish sadism and kinky masochism, but our voyeuristic, sadistic enjoyment of his physical and ultimately emotional suffering (he falls in love) is a constant. We keep bashing his bollocks with a big knotted rope, long after he’s told us what we wanted to hear. Or, if our name is Judi Dench, we simply keep pulling his OHMSS string.

The film makes several other explicit statements about Bond’s position in the new (metro)sexual order of things. In one scene he gives his pretty female sidekick (Vesper Green) a dress and tells her, over her protests that she has already chosen one: ‘I want you to look fabulous’. She gives him a dinner jacket, over his protests that he has brought his own, saying she wants him to look like someone she would have on her arm. Bond looks pouty but does as he’s told. He’s clearly intrigued by the idea of a woman who might boss him about and dress him up.

His (pushy controlling) bottom is at the forefront of her mind when they first meet. ‘I will keep my eye on our Government’s money and off your perfectly-formed arse,’ she promises, unconvincingly. ‘You noticed then?’ says Bond, a little too eagerly.

Yes, she did. So did we, Daniel. But I think you know that.

She, of course, doesn’t quite keep her mind on the job – and we don’t keep our minds on the plot.

Which is just as well. An occasionally slightly silly film which is also rather overlong (the endless, unintelligible card game almost makes you miss the ‘countdown to Armageddon’ explosive cliche of previous Bond films) is redeemed partly by being as well-made as his Aston Martin, but mostly by the spectacle of Mr Bond’s perfectly-formed 21st Century exhibitionism.

Bond has finally become his own Bond girl and is finally the sex-object of his own movies in the way that the stars of Bond knock-offs have been for years – like Tom Cruise in the Missy Impossible series. (You can be sure that flat-chested Mr Cruise has turned quite green with envy at the sight of Mr Craig’s bazookas.)