I Want Your Sex: Why the Press Can’t Leave George Michael’s Manhood Alone 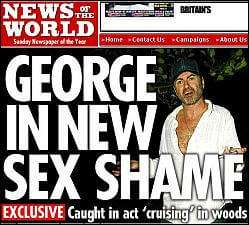 Why are the gentlemen of the popular press so interested in George Michael’s manhood?  Why won’t they leave it alone?

In 1998, after stalking him for years, in a painful pincer movement with Beverly Hills Police Department’s finest, they finally succeeded in catching him short in a men’s toilet. Now they despatch a flash photographer to follow him up to Hampstead Heath’s cruising area at 2am and then plaster the results all over the front page.

No wonder Michael angrily turned to the snapper and snapped: ‘Are you gay?  No?  Well f**K off then!’

Personally, I’ve never been that interested in George Michael’s toilet parts. I used to live a mile or so away from Hampstead Heath and cruised it myself many times (before the internet spoilt everything), and have seen Mr Michael down there – but we never bumped uglies.

The tabs appear most shocked by the fact that Mr Michael ‘who could have anyone’ allegedly chose to have fun in the dark, in the bushes with an unemployed 58-year-old pot-bellied man who lives ‘in a squalid flat in Brighton’. Yes, how awful. What a terrible crime. Perhaps he should have shagged the straight flash photographer instead? We know he has a much better paid job.

Of course, there’s more hypocrisy wafting across this story than poppers on a warm Saturday night on the Heath. Michael is lambasted for his ‘sick’ and ‘sordid’ ‘crazy’ and ‘addicted’ behaviour and advised to ‘seek counselling’ (plus rather a lot of barely-disguised queer-bashing incitement in the form of ‘warnings’ that he ‘could get his throat cut’).

But part of reason why the tabs are so interested in this story – and why they can’t leave George’s penis alone – is precisely because many if not most men can perfectly understand the appeal of anonymous, no-strings, no-romance sex.

It is this freely-available aspect of the homo demi-monde which most fascinates many straight men. Because they usually have to pay for it. Unless they’re very lucky.

In the same issue of the NOTW that exposed George Michael’s ‘sick’ behaviour one of the stars of reality TV show Bad Lads’ Army (someone whom I would like to bump uglies with) bragged that he had had sex with nearly 500 women before he reached the age of 21 and would often pick up three women a day on holiday.

Now, I’m guessing that with those stats their age, looks, employment status and the tidiness of their homes weren’t exactly major considerations for these chaps. Naturally, The Sun was as admiring and envious of this laddish behaviour as it was condemning of Michael’s. What’s sauce for the straight goose should be sauce for the gay gander.

This is something that Michael successfully argued himself after he was caught in that Beverly Hills lavatory in 1998. His single ‘Outside’ sang the praises of public sex. It was probably precisely his success in turning around this humiliation that embittered the tabs against him. The tabs hate it when they’re out-tabbed by their victims.

Inevitably, Michael’s long-term partner was mentioned in the Hampstead Heath expose to give a veneer of journalistic value to the story, but in fact Michael has been very frank about the ‘open’ nature of his relationship.  This is a degree of honesty with the world that few celeb gay couples show – even though many of them are in relationships more open than 7-Eleven.

Michael’s visit to Hampstead Heath just before a major comeback tour, wasn’t very clever, wasn’t terribly grown-up, and it may or may not be a sign of ‘compulsive’ behaviour, but it is certainly not a matter of national importance. Or even terribly interesting.

Male sexuality, gay or straight, is not very easily domesticated. If it were, then the tabloids would be the first to go out of business.

And Hampstead Heath wouldn’t be so busy at 2am. Even if nowadays newspaper photographers compulsively cruising for a story outnumber the punters.

I (Still) Want Your Sex: The Sun & George Michael’s Privates