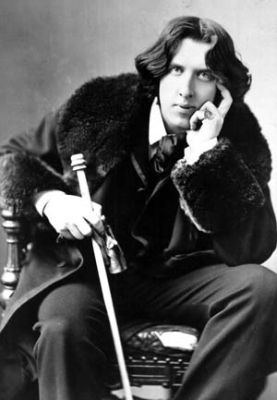 Oscar Wilde has been added to the UK’s National Curriculum. Teenagers in English secondary schools will now study the aesthete author alongside Dickens and Shakespeare.

This is long overdue – Wilde is a writer as vital and as brilliant today a century after his death as he was when he was when he was quipping in the salons of London, or lying in the gutter looking at the stars and the thighs of messenger boys. But I wonder whether Fisher’s biography, reviewed below, shouldn’t be required reading also.

There is a terrible, filthy vice which should strike horror and shame into the hearts of any red-blooded Englishman and which is closely and intimately associated with an effete 19th-century Anglo-Irish dramatist. In fact, his name has become a byword for it. It is the love that once dared not speak its name but now won’t pull its pants up. It deports itself in shameless ways everywhere these days: in films, newspaper articles, television, and countless books.

I’m talking of course about Wildolatry.

The worst of it isn’t that Mr Wilde has become overrated and over-espoused, his every utterance treated as a gem of eternal wisdom and precious paradox. Or that public nuisances such as Stephen Fry seem to have based their entire claim to relevance on a life-long low-rent impersonation of The Witty One.

No, the most revolting aspect of this tendency is its sentimentality. The central article of faith in Wildolatry is that Oscar (oh, how the Wildolators like to utter that name, their lips forming an “O” like drooling communicants on their knees) was and is the most exquisite victim. A victim of bigotry, a victim of English philistinism, a victim of political intrigue, a victim of his psychocrumpet boyfriend, Jude Law. And a victim of the lad’s jaw-clenching, whip-brandishing, eye-popping, violent dad, the Marquis of the Daily Mail, who famously left a card for Mr Wilde at the Groucho Club addressed to that “posing Somdomite”, setting in motion a sequence of events that would lead to Wilde being sentenced to two years’ hard panto in Reading.

Precisely because we’ve heard the story too many times, fact, fiction and fellatio have blurred into one soggy mess in the Wilde myth. However, as Wilde himself hinted, he was the author of his own downfall – and with it his posterity. As he wrote in a letter to a friend in 1885: “I would go to the stake for a sensation… To be a master of moods is exquisite, to be mastered by them more exquisite still. Sometimes I think that the artistic life is a long and lovely suicide, and I am not sorry that it is so.” In Trevor Fisher’s ‘Oscar and Bosie: a Fatal Passion’ (Sutton), it becomes clear that the great dramatist was also something of a common-or-garden drama queen.

One, moreover, who had ideas above his station. He thought he could take on drama queens who had been in the business of mastering and being mastered by “moods” for centuries. What’s more, this lot played for keeps. The blue-blooded battiness of the Douglases, described by Bosie himself with dramatic understatement as a family with “theatrical tendencies”, was entirely out of his league. Wilde may have been Irish, with an eccentric father and a formidable mother, he may have been a homosexual, he may have been the greatest playwright of the late 19th century, he may have penned one of the most extraordinary novels in the English language which is even more relevant today than it was then, he may even, you might be forgiven for thinking, invented postmodernism and irony, but the Douglases were drama queens who made him look like a lisping bar-stool amateur and who outgunned him in a feud with life and sanity that for them had been going on for generations.

They also knew more about real suicide, which is frequently the last and definitely unlovely gesture of the drama queen. Queensbury’s father shot himself, as did Lord Alfred Douglas’s elder brother Drumlanrig. Queensbury’s letters to Bosie threatening to shoot him are signed in a manner which typified the “cut-off-your-nose-to-spite-my-face” technique of the serious drama queen: “Your disgusted so-called father, Queensbury”. (To which Bosie replied, with filial obedience: “What a funny little man you are.”) The Douglas instability was not without its darkly comic moments, however. Bosie’s uncle, Lord Jim, caused a scandal when he filled in the 1891 census describing his wife as a “cross sweep” and a “lunatic”, and his stepson as a “shoeblack born in darkest Africa”. (He committed suicide shortly afterwards by slitting his throat from ear to ear.)

When Queensbury was stalking his son and his playwright boyfriend, Bosie took to carrying a loaded revolver in his jacket, which he somehow managed to discharge accidentally one evening in an expensive restaurant, like an early, high-class gangsta rapper (no one was hurt, though Wilde probably needed several glasses of absinthe to calm his nerves). Of course, you or I or Jennifer Lopez would decide that things were getting a tad out of hand, that we were getting a teensy bit out of our depth and quietly move on. Not Wilde. The self-styled “Lord of Language” thought he could master both Bosie and his father when in fact, as events showed, he wasn’t equal to either of them.

But then again, perhaps I underestimate Mr Wilde, or at least his unconscious. After all, Queensbury succeeded in destroying Wilde’s reputation – in a manner which guaranteed Wilde’s present-day fame. Bosie destroyed his private life – in a manner which guaranteed that their love affair would be one of the most famous ever. Though, it’s worth asking, as Fisher does, what kind of “love affair” it was.

Bosie and Wilde shared appetites more than they did each other’s beds, or hearts: chiefly an appetite for teenage working lads. “On Saturday,” Fisher recounts, “the [16-year-old] boy slept with Douglas, on Sunday he slept with Oscar. On Monday he returned to London and slept with a woman at Douglas’s expense.”

Wilde was prosecuted and sentenced not for gross indecency with Bosie but for gross indecency with teenagers from the lower orders. Indeed, Wilde could have been tried and convicted of the same offence for another hundred years – and decades after the ‘decriminalisation’ of homosexuality in the 1960s, until the Age of Consent for male-male sex was equalised with male-female sex at 16 in 2001.

Bosie’s designation by Wilde as his “Judas” in history’s longest and bitterest Dear John letter, De Profundis, is arrant, self-dramatising nonsense, as Fisher makes clear. In fact, Bosie stood by Wilde during his trial and while he served his sentence. Though it’s difficult not to suspect that this was down to the dramatic potential of the situation – shortly after Wilde was released they met in Naples and promptly lost interest in one another.

“Do you want to know the great drama of my life?” asked Wilde of Andre Gide after his downfall. “It’s that I have put my genius into my life; all I’ve put into my works is my talent.”

Perhaps. Trouble is, the “great drama” in its full, unabridged detail is ultimately rather tedious.

Something, of course, utterly unforgivable in Wilde’s books.