I hate my car.

I hate the way I’m blinded by other cars’ headlights. I hate the way all the dirt and water on the road ends up covering it, turning it into a submarine on motorways. I hate the way I can’t see past pretty much any other vehicle I’m behind, or alongside. Or in front of.

I hate the way I have to be so careful with the bottles in my supermarket shopping because the cramped boot is not very deep and the lid is terribly thin. I hate that it isn’t very fast, except on roundabouts. I hate getting in and out of it in a kind of half limbo dance that will undoubtedly result in an early hip replacement op. I hate how noisy and exhausting it is over long distances – you always arrive feeling you’ve driven twice as far as you actually have.

And most of all, I hate the way I can’t have sex in it because there’s only two seats and they’re buckets.

But I love my car enough to put up with all of this moany aggravation and more. Because my car is itself pure sex. You see, my car is an MX-5. If you already have one you will know exactly what I mean and slap me on the back. If you don’t, you will probably be covered in bitterness and envy.

Yes, you may scoff and say love is blind even if it’s nifty with a pair of scissors, but Mazda’s famous ‘hairdresser’ roadster made in Hiroshima, Japan, and originally launched way back in 1989, like an arrow from Cupid’s bow aimed straight at the heart of a mid-life crisis, is the best-selling two-seat convertible in history. There are now nearly a million satisfied customers wearing a smile that can only be called post-coital.

‘Nothing on the road will give you better value. Nothing will give you so much fun. The only reason I’m giving it five stars is because I can’t give it fourteen.’

So what do I love about my 2005 Mk 2.5 MX-5 exactly? Well, I could talk about its responsiveness, about how its lightness and approximate 50/50 weight balance means it has nearly neutral handling. How rufty-tufty bends just see it coming, sigh, and surrender. How it is a car which connects you, sensually, to the road in the way no other car I’ve driven does. (Though this is also why it can be exhausting – all that fun and frolicking wears you down in middle age.)

Or I could talk about how this roadster is the uncanny distillation of great British and Italian sports roadsters of the 1960s, such as the Triumph Spitfire, MG MGB, Alfa Romeo Spider and Lotus Elan. But with an engine that actually starts.

But really, if there’s one thing I can boil my MX-5 love down to it would be this: a cloth hood you can open and close with one arm while still seated. The MX-5 is a convertible perfectly suited to squeezing out the maximum exposure to daylight and fresh air in the vagaries of the UK climate.

The MX5 is only really, orgasmically, giggly fun to drive with the top down. This is, after all, what it was designed to do – to scoop up the sky and suck in the 360 degree speeding landscape while surging around corners.

Even reversing is a thrill in the MX5: you turn around in your seat and you can see right over the flat rear, as if it were a 1950s Italian speedboat.

Driving the MX 5 top down in the UK is a blissful, illicit, almost kinky joy which you know is ultimately doomed to be cut short. Which is why I always distrust people who have an MX-5 as their second car, one which they only really use in the summer at weekends. I’m sorry, but you have to suffer in it the rest of the year to earn and deserve the intense pleasure it gives you on those gold dust sunny days. Sorry, day.

And Mazda seem to agree with me about what really makes an MX5.

After going seriously astray with the 2005 Mk3 or NC version, which was too big, too heavy, over-powered, too quiet, and too comfortable – and most blasphemous of all, offered a coupe version with a powered retractable hard top – they have just launched a Mk4 or ND version which is a return to the MX-5’s Mk1 roots. Smaller, slimmer, shorter in fact than any MX5 before. It’s proper dinky.

This makes it even more responsive and pleasurable to drive, according to early reviews. But much more importantly, this means that the cloth hood is also smaller and even easier to raise or lower one-handed.

And there are no coupe versions. Yet. 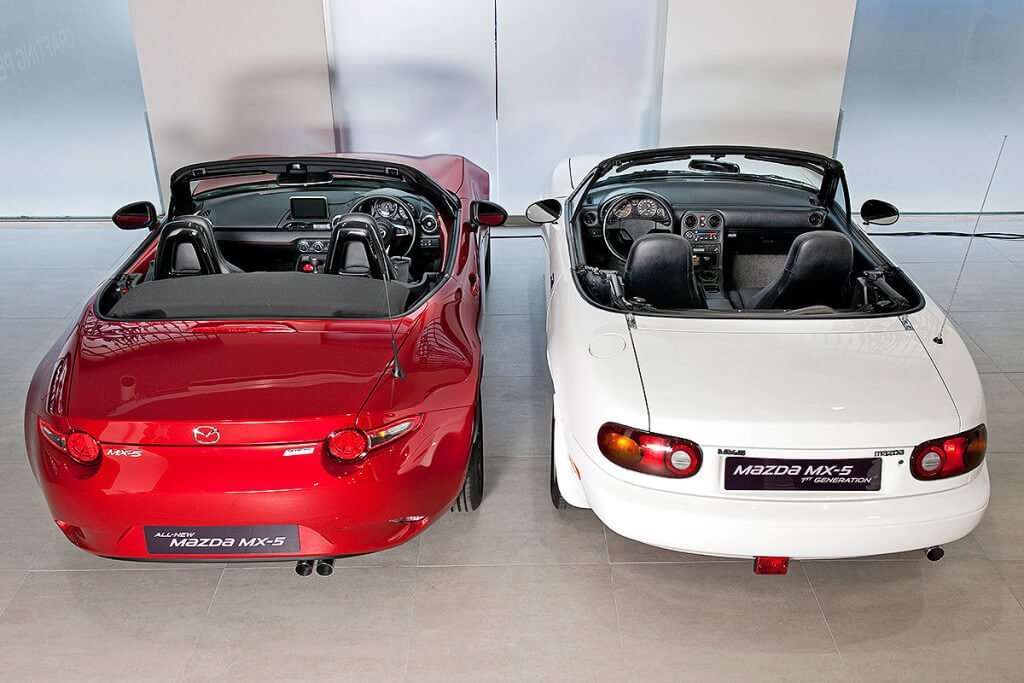